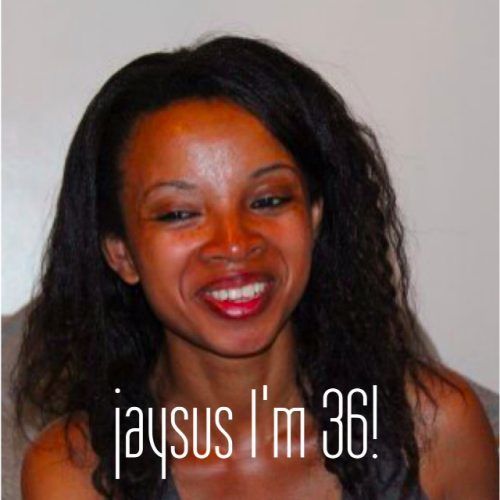 On Sunday I turned 36, which I celebrated with a party on Saturday. As it turned midnight, I was singing Return of the Mack on the karaoke machine (we have a Lucky Voice set which means we can have impromptu karaoke sessions) plus earlier in the evening, one of my best buddies and I pulled off Push It, Superwoman and Not Gon’ Cry (the last two made me think of many a BR reader). Thanks for the birthday wishes – some of you have very good memories! As always, here is my annual birthday lessons post…

I finished Orange Is The New Black – I can totally see how that ending happened. Nuff said. Missing the series dearly.

I’m going camping with my girls at Camp Bestival from Friday to Sunday. Haven’t camped since I was a teen when I camped every summer at beautiful Brittas Bay in Wicklow. Have borrowed a tent (assembling should be hilarious) and am going with my homies @bumpwearclaire and her 3.5 week old (seriously) and 3 year old plus @geekisnewchic and @lucycdavies her kids and campervan. I suspect my assistant Kate will be hiding as we’re trying to hustle her husband into assembling our tents. Haha. It’s guaranteed to be nuts and yes we’re packing mojito ingredients.

It’s full-on summer holidays and rain so I’m being forced not to do very much as the girls are keeping me busy enough – yay!

I’m loving being on a break! I’ve been having mega naps and pottering about. Don’t worry – I won’t enjoy the break too much!

Waiting To Exhale
More on deal breakers: Knowing what will break your relationship deal...even when you're crazy about...
Happy Birthday To Me: 35 Thoughts On Relationships, Self-esteem and Life