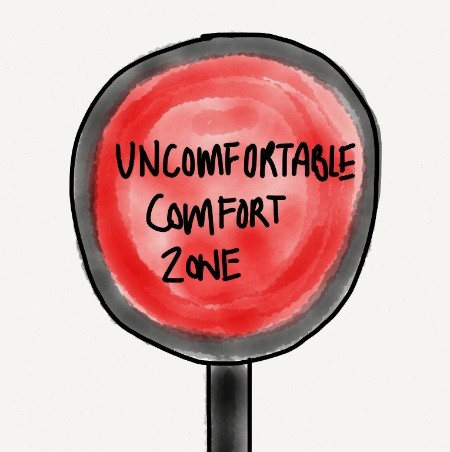 I’ve dealt with a company for several years and at first, they were alright, probably because I didn’t need as much back then and didn’t expect that much either. Over the years, though, their service has declined, and I can safely say that for about half of our relationship, I’ve wanted it to be over or change.

I’ve always had or should I say found a reason not to move on from the company. ‘It’s not the right time’; ‘If I move it will be too much hassle’; ‘Something could go wrong with the transfer’; ‘Maybe they’re not that bad’; ‘Maybe it’s just what companies like this are like’, and yada yada yada. Despite my loyalty as a customer, I haven’t received increasing (or at least steady) service. In fact, they’ve been downright shady on occasion!

It’s like a bad marriage: too bad to stay and have a genuine shot at working at it but too ‘comfortable’ to leave and be uncertain. I may have remained their customer but it’s been with gritted teeth and some temporary improvements based on me kicking up a fuss and then being placated with gestures of goodwill.

In an ideal world, the company would appreciate my loyalty.

As is the way though with interpersonal relationships, if a company or a person doesn’t value loyalty then you being loyal isn’t going to change anything. You’ll just continue to get dodgy service with your loyalty.

Our relationship worked okay when I had limited needs but that changed. It essentially boils down to us wanting different things. We’re incompatible. At that point, I should have left. Thank goodness that I stopped overstaying my welcome in romantic relationships! I finally understood that, at some point, it’s time to see the gestures of goodwill, the promises, the excuses, the rationalisations, the make-up sex, the discussing to the nth degree, the willing, the waiting, the hoping, the stalling, the turning a blind eye and whatnot for what it is: delaying the inevitable.

When you want to find a reason to stay in the wrong relationship, you’ll find one (or make one up).

You’re not looking to truly understand the reasons behind your concerns because then it may take you in the opposite direction to staying or inconvenience you with what you find out or have to change. Instead, you look for reasons to squash down your concerns and to remain in your uncomfortable comfort zone. You rationalise that it’s not ‘that bad’ or that moving on would be tough.

It’s one thing, however, to find reasons to stay that are there in tandem with means of resolving your concerns and moving forward; it’s another to find reasons to stay and maintain a status quo of frustration with temporary improvements due to you kicking off and threatening to go. That’s not to say that you shouldn’t recognise genuine reasons to stay but shoving concerns under the carpet or muddling along until the next big blow-up, doesn’t address the issues.

With the annoying company, I’ve realised that I’ve fallen into the trap of choosing to be inconvenienced and peed off for the long-term over getting uncomfortable in the short-term.

With relationships, we can also argue that we might ‘get it wrong’ in the next relationship so it’s too much risk. It becomes, I’d rather avoid the uncertainty of getting back out there and the possibility of getting it ‘wrong’ with somebody else when I could just stay here with you where I know what’s up even if I don’t like it.

I remembered something important this week:

Yes, there is a cost to going but there’s also a cost to staying. I’ve paid, I’m done.

We focus too much on the perceived exit cost and the hassle without enough attention to the cost of remaining. We treat uncertainty as a cost, but the certainty of what we’ve been dealing with, even if we choose to deny it or to bet on potential, is a cost too. It’s also safe to say that what we perceive as a cost can pave the way to opportunity. Instead, we limit our opportunity and frustrate ourselves and then bag and tag it as ‘loyalty’ and ‘love’.

When we stay and feel paralysed, miserable, and dependent on trying to control the uncontrollable by hoping that a person or situation changes so that we don’t have to, there’s a cost to this. There’s also a cost when we stay and decide that we will be and do all manner of things to maintain our decision to stay and then end up deeply compromised. This makes it tough because not only is it scary to go but we think, Jaysus! I’ve only gone and twisted and contorted myself into all sorts of things in order to stick around and even that didn’t work. Feck! You know what? I’m going to stay and try and go bankrupt trying to get a return on investment.

Life will always present us with situations that require our discernment. There’s a cost to leaving but there’s also a cost to remaining.

If you operate from respecting who you are, the cost won’t be compromising yourself. You won’t compromise your needs, desires, expectations, feelings and opinions, and will use recognition of where something isn’t working to honour your values and boundaries.

We don't need to like or agree with someone to empathise
Believing It's Impossible or Very Difficult To Change? If You've Changed To Accommodate Unhealthy Re...
Indecision About You Isn't Sexy Or Acceptable