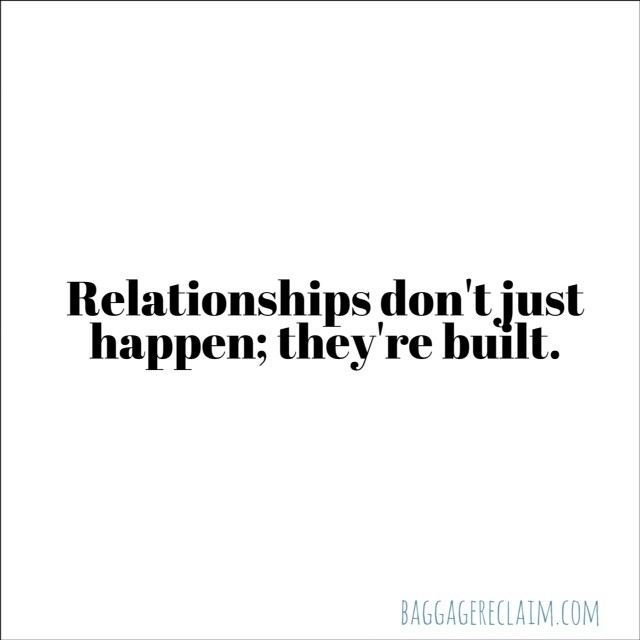 So many people who feel twitchy about commitment say stuff like, “Natalie, it’s too much to expect somebody to know if they want to commit in the early stages of the a relationship”, which is the same as saying, “It’s too much to expect a person to make any decisions no matter how basic, in the early stages of a relationship.” A bit of probing and it becomes clear that that they’re twitchy about commitment because they associate the term with forever. Personally, I’d be damn scared of dating and being emotionally honest if I thought that me saying, “I like you. Let’s spend more time getting to know each other”, was going to be taken as an iron-clad forever agreement.

Commitment is a decision and we make decisions in all areas of our life and without even being conscious about half of the ones that we’re making – we use habits to take care of a lot of our decision making, sometimes too much so.

In terms of dating and relationships, when it comes to commitment, we phase it in – something I’ve written about before. At its most basic level, commitment is about showing up and then choosing and re-choosing to keep showing up to the relationship in a committed (decided at that level) capacity. If the person you’re with cannot show up for and with the basics, they’re not someone that you should be strapping yourself to for the long haul.

This past Monday marked our two-year wedding anniversary – incidentally, after two years of being blanked, my father called and apologised but we’ll save that one for another day. One of the things I know with absolute certainty is that I can’t decide that I don’t feel like showing up to my marriage tomorrow. I can’t decide to emotionally check out or start shopping around. Well actually I could but in doing so, I would be making a decision that takes me in the opposite direction of commitment.

If I’d had a problem with showing up in the previous stages, that in itself would have indicated that we shouldn’t have been making another level of commitment through marriage.

I see relationships and the phases of commitment in a similar fashion to children learning to read. Here in England, they have different reading levels (by colour) and as the kids move up the levels, they enhance their literacy skills. Somebody who is on yellow – a preschooler – won’t have the same literacy level as someone who is a few levels along.

When we go from stage 0 and move along, we are becoming emotionally and relationship literate about each other, or at least we hope we are if we’re both working together.

Problems arise for instance, when we take stage 4 declarations seriously from someone who we’ve only been introduced to via a dating site (stage 0) or when we have ‘forever’ feelings and expectations for that person. This is Fast Forwarding and Future Faking. It also shows a lack of comprehension for what a relationship takes – action with time and experience.

I hear from so many people who have gone ‘all the way’, so stage 3-4 despite only being truly based at stage 1 or 2 and there being feedback from the interaction that’s indicative of commitment issues. A person who cannot decide to only date and sleep with you, or who struggles with the concept of deciding to progress from dating into a relationship and seeing how things go so that you can get to know each other on a deeper level, isn’t going to be capable of other commitment.

If a person cannot cut it on the basic comprehension in the early days of the relationship and/or they circumvent being and doing the stuff that will foster deeper intimacy and communication in the relationship, halt.

I know it’s annoying when you look at how much time and energy you’ve invested and you’re in essence thinking, Hold up a frickin’ second here: We’re stage 1 even though we’ve been together for several years (some people are on a permanent date), but that doesn’t mean that a greater level of commitment is possible.

As I said to one reader, How the hell are you going to try and get this person to commit to the long haul when they cannot comprehend why you’re not okay with being in a casual relationship?

If as we share our lives in the relationship and we find that we have incompatible values that will make increasing commitment a problem or we find that we don’t communicate and deepen our relationship, we have to address this before we go deeper. We need to know how we interact together in real life. How do we deal with the likes of stress, pressure, sharing our lives, sharing ourselves? Can we talk, I mean, really talk? Are we being our true selves, or are we playacting at a relationship?

Not all commitment equals marriage. There are numerous decisions we need to make before that point plus marriage is just one expression of a level of commitment but not the only expression. This is a good time to mention that commitment is not only a decision and showing up, but also the expressions of that commitment through action. The fact that someone is in a relationship or married doesn’t mean that they are committed. Of course in an ideal world it should but in reality, some people are still dating hence why cheating exists.

‘Showing up’ doesn’t mean existing and showboating for an audience.

Just like with our jobs and careers, if all we did was show up, we would not be putting in a quality effort. It’s about what you show up to do. Some people show up to pass time, to tick a box and to collect their benefits – and that’s just on the job front… – and some people show up willing to give it their best shot each day. They show up with love, care, trust, and respect. No day is perfect but each day they show up and they try. They don’t give themselves permission to take a holiday from their commitment. They don’t show up looking for ways to question and analyse the decision each day.

Healthy relationships give back, as in, you put in and you’re both rewarded. You both build from the ground up and progress – you don’t just expect to manifest the relationship you want out of your imagination. You navigate it together. You copilot together. Unhealthy relationships leave you worse off. You feel like a worser person for being in it. You show up, often willing to do the work of the both of you (overcompensating and being a blame absorber is never a good move) and end up getting a kick in the teeth for occasional ‘good times’.

Relationships don’t just happen; they are built. They’re a joint venture and that’s only going to be decided and developed by making some initial decisions. Sometimes we’re too caught up in putting a roof on something that doesn’t even have a foundation and a structure to rest it upon.

PS I recently guested on my local community radio station and the recording is available just in time for some weekend listening. Thanks to all of the readers who emailed in!

It's Not Your Intuition That Misleads You - Evaluate The Reasoning and Knowledge Applied
Who holds the powerbase in your relationship?
"There's no such thing as an honest cheat" and other thoughts on cheating