Phased In Commitment – Reality based instead of hope based commitment 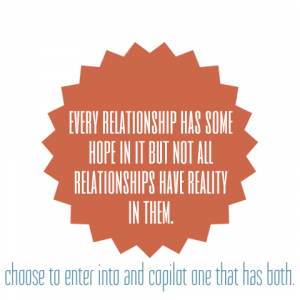 In the past I used to commit to air aka ‘hope’ with heavy notes of bullshit. This set me up to be repeatedly disappointed by effectively Future Faking myself (projecting a future so I could get away with or get stuff in the present) and often allowing others to Future Fake and Fast Forward me, the latter being when someone uses speed and intensity in the beginning or when wooing you back or distracting you from what may be their assclownary or just the lack of matching words and action.

When reality didn’t match my hopes and expectations, I’d either be left wounded, disappointed and grudgingly single again or, I’d dig deeper into the How Low Can You Go Bunker and roll out the people pleasing big guns because it was ‘easier’ than admitting that I’d made a mistake.

There came a point in my life when I literally could not stomach anymore bullshit and it was when the prognosis for my then illness was pretty dire and I also had to face the fact that I’d spent 4.5 out of 5 months wondering if I was in a relationship with someone and being mucked around. These two things along with no longer being willing to play a role within my family that left me feeling powerless and it was time for me to breathe in the air of reality.

Overactive imaginations, insecurity and a penchant for responsibility dodging don’t go well with romantic relationships so I determined to be reality based and to phase in commitment – in effect, The Debit and Credit Trust System. This means entering into relationships and situations with a basic level of trust due to being safe in the knowledge that you have your own back due to being a resident in reality.

Increase (or decrease) trust based on consistent results over time – reality.

How do you feel on an ongoing basis? Actions matching words? Is your relationship progressing on an emotional, physical (not just sex but do you consistently see this person and what is it like when you’re together and also apart?), and intimate level? Do you share core values? If you don’t, trust issues will arise even if you’re not aware of why on a conscious level. Does the same person show up consistently or are you dealing with someone who seems to have multiple personalities? Are you hoping or are you living? Do you trust this person because they conduct themselves with integrity, loyalty, compassion, empathy, respect, care etc., or do you trust them out of laziness to go through the discovery phase or out of an avoidance of trusting you? Are you still the same person that entered into this or have you changed to appease? If yes, that’s a code red.

Phasing in commitment allows you to gradually get to know someone through the discovery phase and have the emotional, physical, spiritual and mental space to have a sense of your own reality. It also helps you to spot the other landmarks of healthy relationships – consistency, progression, balance, intimacy, mutual love, care, respect and trust along with shared core values.

It is unrealistic and foolhardy to jump straight in at the deep end, not just because it can be like leaping in with your eyes, ears and hands taped up into shark infested waters but more than likely you may find that it’s deceptively shallow where you jumped.

Going all in immediately or very quickly is a gamble that’s highly unlikely to pay off, not least because it gives the impression that you’re desperate to escape something.

Someone who wants to be in reality and they themselves want to get to know and learn to trust you will have no objection to taking time.

The Future Faker and Fast Forwarder seeks to circumvent the phased in commitment process by projecting and promising while expecting that you commit and give on this basis – hope that they will produce the goods. Sure, if they were willing to be themselves and show up each day to the relationship, you could judge whether to gradually commit on that basis. They pepper the bullshit with what appear to be ‘examples’ that indicate the expected outcome, then you reciprocate… and then when the results begin to diminish, you end up mind effed and/or working harder.

When both parties are willing to be accountable for themselves as well as what happens in the relationship, you get two people having a relationship in reality. If you want to take your time and the other party wants to blindfold you or fill up the relationship with smoke and mirrors, much as you might be tempted to take a punt on hope, it’s best to heed the reality that complying will end up causing you to detract from you while intentionally opening you up to harm.

Every relationship has some hope in it but not all relationships have reality in them. Choose to enter into and copilot one that has both.

Great Sex Does Not Equal Love
Podcast Ep. 223: The Gaslighting of Future Faking
Advice Wednesday: Why Do I Have A Pattern of Valuing People Who Don't Value Me?