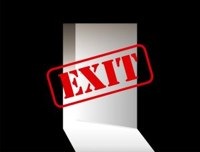 It’s day 30 of the 30 Days of Drama Reduction series, and I’ve had an amazing month and a lot of emails from readers telling me their stories and telling how much they have changed even in the past month! Of course, I didn’t squeeze in everything especially the last few guest posts so look out for these to follow over the next few days.

The last post is especially for the most hardcore of Drama Seekers, addicted to Relationship Crack, that want to break…they just can’t quite do it by cutting off contact.

The hardcore No Contact Rule is really the ideal way to extricate yourself from men that don’t want to break and just bring a whole load of drama to the table, but for some of you…breaking up is hard to do, even when you say it’s what you want to do. You know who you are – you’re the women that want to break up with him but if he says or does the right thing today, your knickers will be swinging from the light fixture tonight. Unfortunately tomorrow you’re going to feel pretty awful.

Have a Get Out Plan – a carefully coordinated effort where you start to ease out of the relationship in preparation for cutting off contact.

Why am I suggesting this? Because if I don’t, some of you will still be yo-yoing in ten years time and you aren’t very good at cold turkeying. If you’ve been struggling with no contact and falling off the wagon, more often than not, you’re struggling to manage the fear, the anxiety, and the insecurity that come rushing in when it happens. The relationship crack is too intoxicating for you.

ONLY use this option if you keep applying the No Contact Rule and keep falling off the wagon with the same guy.

BUT, don’t beat yourself up if you have fallen off the wagon a couple of times because sometimes this needs to happen in order to have a proverbial straw to break the camels back.

BUT, some of you need a halfway house…a Get Out plan…

I would love for everyone who needs to apply the NCR to be able to stick to it but quite frankly, some of you just won’t make it if there isn’t a halfway house that allows you to extricate yourself out of the drama filled haze slowly but very surely.

There are two big glaring questions though that you need to ask of yourself before you opt into the watered down version of the No Contact Rule:

1) Do you really want to end the relationship or are you looking for another way to buy yourself some time to give you more opportunity to stay invested?

2) How much more badly do you need to be treated or how much more drama do you want to engage in before it’s enough?

If you’re not sure if you want to break up, this may not be for you. If you are sure but you know that it’s not going to be easy to do whether it’s because you know you’ll be suckered in, there are things to sort out (could be financial for instance), or because he’s a persistent bugger that will up the ante when you cut him off, the Get Out Plan can help you.

But be careful of being sucked into more drama or being mistreated even more. There has to be a cut off point.

When you start to step back, you find that you start to see things more objectively, start to him in a real light, and start to actually want to make a break. This gives you time to get yourself prepared rather than jerking out of the relationship and panicking at your reaction to it.

So this is what you do.

Not a pretend one that you’ll move to buy yourself more time in a few weeks or months, but a real deadline. Set a date when you are going to cut him off. Make it challenging but realistic – don’t make it so long it’s a joke, but don’t make it so short that you’re going to panic and reschedule. Nothing longer than six months though and preferably it should be one to three months. In the meantime, everything that you do between now and then is easing yourself away from him and out of the relationship.

Choose The Next Big Thing.

Some people find setting a date quite difficult and in this case, go with The Next Big (Shitty) Thing that happens. Only thing is that it could happen tomorrow or next week. We often have an idea though of the type of stunts that they may pull or of our own personal levels of upset, so you can base it on this. I vowed that the next time that he picked an argument with me and made me feel small, I was out.

Tell somebody. Secrecy is a pain in the arse when we are involved with these men because we don’t get to sanity check ourselves or our decisions. Tell a trusted friend or family member your deadline so that you stick to it. If you can’t think of anyone, tell me. I’ll make sure you stick to it. And make sure you tell them the real one!

This is the key to it all. You need to start withdrawing and changing things up a bit. Not only does distance give you objectivity where you will start to see himself, you, and the relationship in a more realistic light, but it means that by the time you ditch him, the cold turkey is not going to be as bad as wrenching yourself out of habits. What does this involve?

– Stop taking every call. Many drama filled relationships have women who answer every single call and are basically on tap for him. Stop it. Let’s say you speak 5 times a day normally, drop to 4, then 3, and so on. He is likely to get into a bit of a tizz or even blow hot when you do this but pay no attention. He may even pick an argument with you, which brings me to… Don’t tell him that you’re reducing your calls – just tell him you’re busy with work, a friend, whatever – make something up if you have to! In fact, line him up for the reduced calls by feeding him a story about your increased workload. Also make him wait a bit longer for replies to texts or emails.

When you start withdrawing, they make react to the sudden change and pick a fight or question you about your actions. Do.not.engage. Certainly don’t explain. It will totally catch them off guard. All those things that you would normally throw a wobbler about and create a whole load of drama – don’t. Sit on your hands, tape your mouth, run out of the house, do whatever you need to do, but bite your tongue and play nice.

– Stop agreeing to every meeting he suggests.

Make other plans at times when he’s likely to expect you to be available to him. Personally I find this quite liberating when you get the opportunity to say no. Even if you don’t make plans and end up staying home, do not agree to every time he asks you out. If you have a 3 month plan, start dropping a meetup a week and then add in another one – basically start to reduce the amount of time you spend with him.

Instead of taking what he says at face value or being suckered in by lust, start watching his actions more closely, listening closer to what he says, and observing the changes in your own behaviour around him and that are resulting from the change in dynamics. If it helps, keep a Feelings Diary which is basically noting your moods and the shifts in them and what triggers them. They are great for identifying your triggers and also what he is doing to impact on you emotionally.

Easy on the sex

I’m all for getting laid but sex clouds judgement and puts you in the Justifying Zone. All of those happy hormones flying around may convince you that the huge orgasm is a reason to stick around. Naturally by seeing him less there are less opportunities to be seduced. I know of some women who will have sex but get theirs and then turn over and go to sleep knowing that he will be totally caught off guard. Cold…but very funny!

Be careful of alcohol

If getting a bit tipsy or drunk fuels some of your drama or passion, it’s time to cut back so that you don’t get derailed.

Spend more time with you and with family and friends

Learning to love you and spending time alone with you is one of the best things that can happen to you, not only because loving you makes you very self-aware of people who negate it or hamper it, but it also means that when you cut contact, you will feel like an entity as opposed to feeling like you’ve been robbed and left with nothing because he’s not with you anymore. Create your own life with meaning and embrace family and friends, or take part in activities that help you to meet new people.

You may find that you start the NCR in full before you reach your deadline because the great thing about withdrawing is that you see them as they are but you also recognise how much better you feel by not being drawn into the cycle.

Your thoughts? Can you add anything to these suggestions?

Catch up on posts in the 30 Days of Drama Reduction series.

When Someone Bails / Pulls The Slow Fade After You Say That You're Not Ready To Sleep With Them Yet
More Translations: I Don't Want To Hurt You, You're Out of My League and other such sayings...
We need to talk about "selfish"