Getting Committed About Commitment: There’s No Such Thing As a Decision-Free Lifestyle 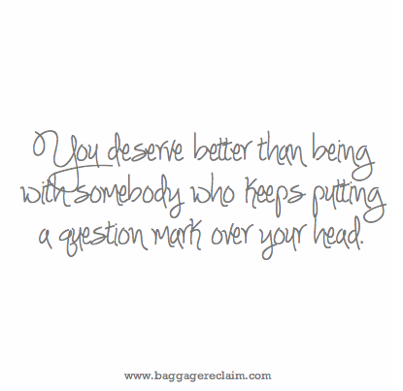 Decision-making and decision sticking issues means commitment problems. What we don’t realise when we keep our options open, when we engage in comparison, when we question the hell out of the decision that we’ve made, or somebody says something and we immediately wonder if we should switch to what would please them, is that we’re uncommitted.

Commitment is something that we do in all areas of our life, not just in our relationships, and what we do have to realise is that we can’t have it both ways. We can’t be uncommitted and doing the equivalent of writhing around in our own lives while clinging to the fence and then expect everything and everyone to fit in around us while not experiencing any negative consequences.

It’s this fear of missing out and fear of getting it wrong, but the truth is, we can’t have it all. I’ve had enough men sit on the fence in my life while also sitting on that fence with them but trying to get them to get off it first to know that we have to make choices and there’s no such thing as a Decision-Free Lifestyle. Choosing not to make decisions is a decision in itself.

If you get a new job, accept it, but then continue shopping around for other roles, meeting with recruiters and wondering if you’ve been too hasty when you haven’t been there five minutes, are you going to put in your best performance? Will you work as hard as someone who actually wants the role?

When I brought my wedding dress, I stopped looking, focused on my dress and didn’t have to experience any anxiety from sizing up other dresses (although I had a headache getting it…). If I committed to the dress but then found that it wasn’t for me, that would be one thing, but exploring other options to see if I still liked the dress a lot or whether I could do better would have meant that not only was I still shopping around, but I was really undermining my decision. The thing is, what I could have done with my dress is exactly what I see people doing every day with their relationships.

They continue dating other people to see if it makes one particular person “really special” while also making sure that they’re not ‘missing out’. Why do they need another person to validate their feelings? Why does the person effectively have to compete, often unbeknownst to them?

There are some people who are married or in relationships who basically haven’t stopped dating because they still have a profile on a dating site, or they’re flirting it up, eyeing up other options, sleeping around, or still getting their ego stroked by an ex who they’re keeping as a backup plan. If you’re with someone who is behaving like this, they are not emotionally bound to you. They’re not willing to step up with both feet in.

Some people object to dating one person at a time as if giving someone our attention span even if it’s just for a few dates is too big a ‘commitment’ to make. The trouble is that when they’ve still got their options in play, the people they’re with get the short and shitty end of the stick. It feels great for the ‘multitasker’ but there is an arrogance that comes with believing that your split attention is so great that it’s as valuable as someone who is giving their full attention.

Most of us have been guilty of this at some point – you’ll know the feeling well if you’ve ever dated someone while still being emotionally tied up with someone else. When I was with the guy with the girlfriend, I went on a number of dates. What did I do? Try to force him out of my mind and then I compared and I looked for reasons to legitimise my feelings for him, often claiming that my dates weren’t as exciting / interesting / showing as much of their feelings…. as a guy who most of our sneaky get-together’s finished by 8pm, just in time for him to slip home and me to watch Eastenders while making my dinner.

Commitment comes in various guises and it starts with saying YES or NO and making choices that support your decision – both mentality and with actions. What commitment doesn’t involve, especially in romantic relationships, is having a safety net, because most people don’t want or like to be your “safety net” aka Fallback Girl / Guy or backup plan or option.

There’s no such thing as a Decision Free-Lifestyle. Some we’ll get wrong and others we’ll get right, but we don’t learn how to make solid commitments by making flaky decisions. We also don’t learn from the insights gained if we are unwilling to cut our teeth with our decisions and make mistakes along the way.

We have to make choices and we have to commit even if it’s as simple as learning to commit to being ourselves, learning to feel our own feelings, respecting our own needs and values with the appropriate decisions, following through on arrangements and promises made (instead of trying to backtrack after agreeing to them), and letting a decision stick long enough to see how it goes.

We might be “missing out” somewhere, but really are we? This idea of missing out only matters if our heart and feet aren’t in the present, or our present sucks but we’re sticking with a poor decision. The grass always appears greener on the other side, then you get there and realise that you want to go back.

If you get into the habit of making decisions and making even small commitments, it makes it easier to face the bigger ones. This gives you the opportunity to accumulate self-knowledge through the experience of listening to you, making decisions, and listening again and acting appropriately. I’ve found it a hell of a lot easier to make and stick to decisions since I understand and respect who I am, because this is the knowledge of your needs, expectations and wishes, which are linked to your values, that you use as your foundation to inform your thinking and choices, which are of course all supported by your boundaries.

When you stop diving into situations and relationships with your eyes and ears closed and your hands tied to your sides, you can be conscious and this means that you are able to make a decision in real-time based on reality because you do some due diligence and relate it back to who you are and what you need, so you can be more confident making your small, medium and large decisions and commitments.

It’s demeaning to be somebody’s “safety net”, Fallback Girl / Guy or backup plan and you deserve better than being with somebody who keeps putting a question mark over your head while shopping around. The questions are about themselves, not you. They lack self-knowledge. Some people (unavailable folk) rely on having one in play, another in the background and the truth is, until they understand themselves better, they will always be comparing and vacillating on their decisions. It’s not about your worth; it’s about the fact that they’re so afraid of getting things wrong and missing out, that they’re getting things wrong and missing out anyway.

In the end, sometimes your first tough lesson in commitment is committing to opt of a situation or relationship where the other party won’t commit to an outcome. It’s hard, but it’s nowhere near as hard as hanging around hoping that they’ll commit once you’ve jumped through enough hoops to remove their question marks, especially since they’ve raised more than enough about themselves in the meantime.

Trading On Your Looks & Sex Appeal Part 2
You Just Don't Have That Kind Of Power: You Haven't 'Made' Someone Be Or Do Something
Why Is It So Hard To Learn To Like You When You've Liked & Even Loved Others?
Share this...