Can You Make (& Stick To) a Decision? If You Can’t, You Have Commitment Issues 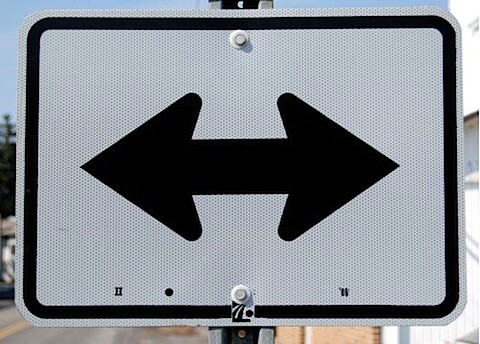 Can you make and stick to a decision? If you can’t decide whether you’re in or out, that means you’re uncommitted, whether it’s to your relationship or to yourself.

If when you make the decision to leave, you then spend the time outside the relationship ruminating on the decision and contemplating whether you should go back, you actually haven’t made a decision!

If when you go back to the relationship, you then spend the time ruminating on the relationship, its problems that you probably should have resolved before you went back or have had a clear plan of joint action, pondering whether you should leave, whether you were wrong to give another chance etc, you haven’t made a decision either.

A decision is the conclusion or resolution reached after consideration. [source Oxford English Dictionary]. It’s also the process of answering a question, which in itself means using knowledge and feedback to draw a conclusion.

Next thing, you’re agreeing to get back with an ex but neither of you have truly considered the factors that broke the relationship in the first place and resolved the issues. You’re often going back because it’s easier than the alternative – change. You’re taking the path of least resistance, or at least what seems like it in the short-term. Then you’re back together and the fever, rejection and anxiety of being apart temporarily passes, until they piss you off again or the fear and gut feeling that nothing’s really changed or that you’re in danger of being hurt again returns. Then you’re thinking about an exit strategy or thinking about the problems and may even be talking the crappola out of them, but you’re not doing anything and you’re not actually committed to your relationship.

What we often don’t realise is indecision or actually choosing not to make a decision (essentially having your cake and eating it) is a decision in itself. It’s an active choice and in fact, everything we do and don’t do is an ongoing sequence of choices.

Commitment requires you to make the decision to commit, which is being absolute in binding yourself to another person and the relationship. If you’re not absolute in your decision, you’re not committed. It’s like saying YES, and then crossing your fingers behind your back. Once you make that decision, every day is acts of commitment that further cement that decision. If you don’t behave committed, guess what? You’re in an uncommitted relationship.

When you make a decision of any kind, you’re faced with a choice between taking the path of least resistance or change.

Will I drag my bum to the shop and get the milk? The easy route at the moment is putting it off or waiting for the boyf to get it on his way home. Or it requires me to get up, adjust my plans in the immediacy to accommodate this task and basically quit procrastinating.

Will you end your relationship for the umpteenth time? The path of least resistance is to go back because it’s the familiar uncomfortable and will give you validation, a shag, some temporary hope etc. Most of all, you get to avoid making change and being alone with yourself and having to be responsible and get out of your comfort zone. Or you consider your relationship in context and think “Jeez! I’ve only given them ten chances over the past two fecking years. What am I? A glutton for frickin’ punishment! I know the score! I’ve got to stop being lazy and deal with my issues and move on. It will feel good to go back now, and shite in about two weeks.”

Will I flog the cheating donkey till it collapses again and be the Other Woman? The path of least resistance is playing the waiting game and listening to someone essentially bend over and talk out of their arse. You’ll get to avoid answering the question of why you’d be in a faux relationship in the first place and you can temporarily fill up on a crumb diet of hollow promises and get to avoid real commitment. Or you could accept that attached means unavailable and that while you may have been that woman before, you’re not that woman now plus insanity is doing the same thing and expecting different results.

A relationship should never be about being stuck in an ongoing decision making process of basically wondering “Will I stay or will I go? Is this it? Or is it not?” Why? Remember how you hated when you were with someone that had you waiting around for them to make up their mind about you? Yep, it’s the same thing.

Make up your mind! Commit to being in the relationship (if it’s worth committing to), give it 100% (relationships are 100:100) and if it doesn’t work, accept the feedback from the relationship and commit to letting it go. If you’ve never truly been out of a relationship and accepted it’s over, you’re actually never in a truly objective and honest position to go back, because you don’t process the reasons why your relationship didn’t work and actually go back out of habit and avoidance of dealing with uncomfortable feelings brought about by the loss.

If you, as an individual entity that’s always responsible for yourself anyway are emotionally available and authentic, when you’re your best self operating on full throttle and the other person isn’t, you’ll recognise the discrepancy and address the situation, draw a conclusion or reach a resolution – yep, you’ll make a decision.

Have you considered all important factors?

Is there code amber or red behaviour?

If you haven’t got a concrete plan of resolution and think you can love away the problems, think again.

What is your gut telling you?

Is there anything you’re ignoring? If so, bring it out into the open and acknowledge it. Remember, a decision based on denial is a BS decision.

Have you been here before? Is your decision rooted in insanity – doing the same thing and expecting different results?

List the reasons (in full) for why you’re going back (or leaving) so you can validate your decision.

What are you afraid of? Make sure you differentiate between internal (fears from within) and external, fears exacerbated by real external factors that you should be considering.

Most of all, after you make a decision, support yourself and the decision you’ve made because if you don’t, you’ll feel insecure and then doubt your decision. Either way, make it and remember that if you keep backtracking and flipping back and forth, you’re never committed enough to the decision for you to ever experience your own judgement.

The (Polar) Opposites Game in Dating & Relationships (Part One)
Self-esteem in a nutshell - When you believe you're not good enough to drive your own life
When They Come Back Claiming That They've Changed...But Have They?