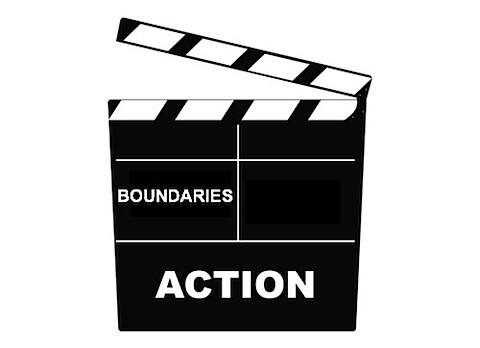 Over the past few years, I’ve gone to great lengths to explain the importance of boundaries, something that all people who have low self-esteem and who put up with inappropriate or downright shady behaviour have little or none of. Boundaries are basically your limits and also act as your personal electric fence alerting you to the fact that you’re uncomfortable or even in danger. They also communicate to others not only how they can treat you and what to expect from you, but also what they’re likely to get away with.

It’s as I talked about a few weeks back in my Broken Windows post – let certain things slide by and it becomes a green light for them to bust up your boundaries even further. They realise that something isn’t right and that you may not like and love yourself enough otherwise you wouldn’t be giving them the time of day let alone the steam off your tea.

Here’s the thing: Boundaries aren’t complicated – it’s the fear of having and enforcing them that people use to complicate them. They’re natural to many people and a necessary part of life and yet when people become au fait with the existence and necessities of boundaries, it then becomes “So how can I communicate my boundaries? What can I say? How do I make them respect my boundaries?”

This is where I have to lay it down in simple terms – Stop the frickin’ talking!

1) They want to communicate the boundaries to someone that doesn’t respect boundaries. Pointless.

2) They don’t want to do anything they just want say something. Also pointless.

3) They want to ‘make’ people respect boundaries and they’re likely to be the types of people that they’d want to make love them and make them see their point of view. Pointless – it’s like throwing your energy into the abyss or peeing into the wind.

Particularly for women, who often suffer with Women Who Talk and Think Too Much syndrome, you’ve got to stop the explaining, justifying and talking the nth degree out of your boundaries because if they’re really your boundaries, you wouldn’t be there or you’d be doing something.

You know what talking, explaining and justifying the existence of things that people with even a moderate level of self-esteem says?

“My boundaries are up for negotiation. In fact, they’re not really my boundaries and I’m not entirely sure I believe in them. I just want you to see my point of view, to change, to make me the exception. Don’t leave me.”

One of the challenges some people set themselves up for after recognising that they’ve been in an unhealthy relationship, often with code amber and red behaviours waving in their face, is to try to apply their new found knowledge with the same types of people or even with an old partner, which kinda defeats the purpose.

I’m going to be honest with you – unless you’re going out with someone under the age of seven, which would be illegal, whoever you’re involved with knows the difference between right and wrong. Unless they are a teenager, it’s unlikely that you are their first relationship or the first person that has ever pointed out their shortcomings or even their complete and utter level of assholery.

They haven’t just fallen out of the sky. They don’t need the ‘right’ person to show them the light – you’re not God or a higher power.

You don’t need to explain or justify your boundaries or try to guide anyone to light of your bountiful knowledge. You’ve got to stop carrying on like one of those bonkers ministers that lays their hands on a member of the congregation in a wheelchair, starts talking in mumbo jumbo, shouting and throwing themselves on the floor, only for the person to stand up and say “HAVE MERCY! I CAN WALK!”

That’s what all this talking to the nth degree, Powerpoint presentations, manuals, trying a different tack, taking them back and assuming they’ve changed and basically being ever accommodating and trying to take the path of least resistance with your ‘type’ that represents your unhealthy beliefs is:

You expect them to fall at your feet (eventually) and wail “I CAN LOVE! MY HEART IS OPEN! I’M UNAVAILABLE/AN ASSCLOWN NO MORE!” They’re just not that special, you’re not that desperate, and you’re not so special that you have the powers to fix/heal/help people out of being themselves.

People only explain and keep on explaining or even justifying boundaries that they don’t believe in. It is time to start believing in what you already know – relationship insanity and the fact that certain types of behaviours and relationships don’t work for anyone.

When you do try making a case for why they shouldn’t be doing something and why you shouldn’t be putting up with it and pacing your relationship courtroom laying out your argument, all someone that would show up to a relationship with shady carry-on does is deny it, claim their version of things is correct, or even make out like you’re the one with the problem.

Stop asking for the person that crossed or even busted your boundaries in the first place to validate your observation! It’s like being sexually harassed by a manager and then filing a complaint about them with them.

There’s no point in recognising that you need to have boundaries if you don’t apply them. There is a reason why there are code amber and code red behaviours – one is stop, look, listen, and if comfortable, proceed with caution and the other is abort mission.

If you struggle with boundaries, when you get a code amber, you ignore the information or have a half hearted conversation and proceed anyway even if you’re not comfortable. When you get code red, you try to convince and change them because you don’t trust your judgement, possibly because you’re scared that if you do, in two shakes of a lambs tail, they’ll turn into Mr/Miss Perfect with someone else. You don’t want to try again – you want this one to be it.

You know what people who have boundaries do when they experience something that they know is a no-go for a healthy, mutual relationship? They walk. They don’t Bet On Potential, deny, rationalise and minimise. They recognise that that they deserve better than selling themselves short.

Know and show your limits and if you haven’t got limits, get some. The idea of knowing these limits isn’t for you to bounce them in the hope that they’ll chase after you and make promises that they can’t keep. You should be bouncing them because you have no room for certain types of behaviour or for feeling bad about yourself.

Stop talking. They don’t need a lecture on the error of their ways or an attempt to make them feel bad about something they’re entirely comfortable with being and doing, even if in your eyes, you think it’s outrageous and ‘needs’ to change – you need it to change; they don’t.

Guest Post: What Not to Do When You Get Dumped
Sometimes a discussion doesn't cut it. Stop discussing, get to FLUSHING!
Relationships need two committed parties to grow and prosper