Don’t disregard early warning signs or your gut instincts as negative or judgmental – this information is useful! 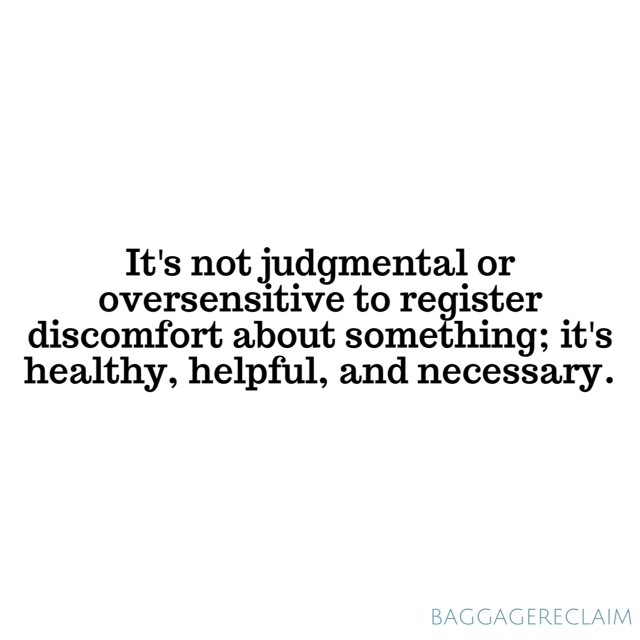 Due to the nature of my work and in particular my spidey senses and sniffer dog nose for shadiness and assholery, I can pick up on very subtle early warning signs that someone else may construe as me being ‘negative’ or even ‘too sensitive’. For example, a few months back, I met up with a business acquaintance and when parting and discussing another meeting, they quipped that I’d better not be giving them any of that “sh*t” and pointed to my herbal tea. I felt slightly disconcerted. It niggled because it felt over the line. Now some people might think I’m crackers for thinking that but that warning turned out to be ridiculously true. It’s not about jumping all over what may be innocent or ill-thought-out comments – those are distinguishable from the stuff that blossoms into a problematic relationship. If you look at your mutual and healthy relationships you will see that these people don’t put you down and rarely cross the line and if they do, they feel bad about it and don’t keep repeating it. They make amends. Your instincts are correct when the behaviour you witnessed keeps showing up.

It’s the very subtle yet niggling stuff that sets the stage for what can turn into an untenable situation or even an abusive relationship. Watch out for Choppers with their insidious erosion of your self-esteem, self-image and even your perception of reality with their putdowns and passive aggressive mind effery. They don’t punch you in the face on day one or come out with something directly offensive but they do slip in a putdown where you think, Did he/she just say that?, Am I being too sensitive? or, That’s a bit over the line. Or they do/say something about someone or something else that when you look back on things further down the line, you realise that it was indicative of things to come.

Sometimes when attempting to decipher situations and wanting to be perceived as generous with our chances, we don’t consider what a person’s actions towards others may mean.

We don’t see it as something that can affect us…yet… which is why so many of us have been or are with people who behave pretty damn badly with others and now do so with us. We thought we’d be the exception to the rule or that what we picked up was irrelevant to a romantic relationship or could be overcome with our love and pleasing.

Classic examples are people who are discourteous to, for instance, restaurant staff or who rage at others right in front of you. One reader went on 4-5 dates with somebody who went absolutely ballistic while driving with her on all of the dates – warning sign of anger issues. Early jealousy and possessiveness is another classic – one ex had a hissy fit when he found out that my ex boyfriend was helping me with a project at uni – we’d been dating for four days when this happened and lo and behold, he was very controlling and jealous throughout the relationship.

People share with me how their partners or exes are racist / sexist / schemey etc., or and think, Why are you going out with somebody who hates your own race or another race, especially when you don’t feel the same way? Or, Why are you going out with someone who despises women/men? You don’t think it’s a bit strange that they’re embezzling their company? 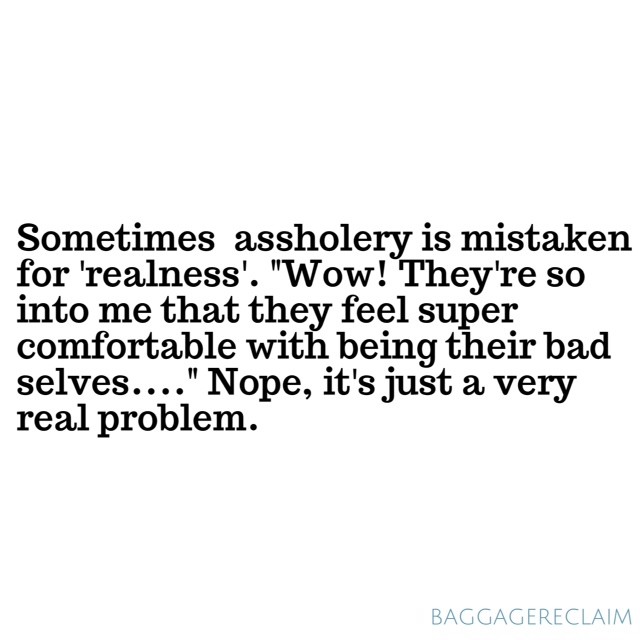 It isn’t judgmental to register information or to compute it against our own set of values. It’s not judgmental to know the limits of a particular relationship; it’s relationship smart. The fact that we pick up on something doesn’t mean that we necessarily have to make a big ‘ole judgement or that it’s a permanent statement of the future or them – we’re just not that powerful remember – but what it does mean is that we need to be aware.

It can be frustrating when we see something first that others around us are slower to notice. It’s easy to assume that people don’t trust us or think badly of us in these situations when really, people have to find out how things are in their own way plus, sometimes we’re attuned to something due to the context of our connection/involvement with this person.

You can often find out the length and breadth of who someone is by being assertive and owning your right to say no and be yourself.

You also see different aspects once you exchange bodily fluids… There are so many who are baffled by friends who screwed them over once they became romantically involved or who feel wounded by knowing what someone’s really like due to having been romantically involved. Looking back, there were indicators within the friendship that they overlooked or indicators within that person’s other romantic relationships – they assumed things would be different because of the friendship. We also interact with people in a different capacity in romantic relationships and in an affair, the secrets and lies predisposes us to seeing a darker side. Romantic relationships also require a great deal of vulnerability and some people are allergic to intimacy.

I don’t always know exactly why something bothers me or why I’m attuned to something in the air but now that I’m willing to listen to me instead of just blithely and blindly careering around like a bull in a china shop, I’ve learned that it’s not a question of spending my life trying to work out if there’s a threat or not (unless there’s imminent danger). Basing your life around feeling under attack or warding off the possibility is pretty damn draining.

You don’t prepare to be run over each day or for your house to burn down; you learn to be street smart and safe and you put in a fire alarm, practice safety habits, and have some insurance. Listening to and looking out for you enables you to be ‘street smart’ and emotionally literate. You’re your own fire alarm with your boundaries which rely on self-awareness and self-knowledge plus knowing that you’re willing to step up for you is your insurance.

You might smell or see smoke before you see the fire – boundaries and code amber and red behaviour is like this. You learn to associate certain indicators and if it proves to be a false alarm or not a major issue, you can adjust to accommodate this. If it turns out there’s an issue, you don’t think the equivalent of, Feck. There’s a fire but I don’t want to appear judgmental or safety conscious so I’ll just stay where I am and see if it goes away or wait until my back’s against the wall.

Even if I don’t use ‘feedback’ immediately, I register it somewhere. Me (or you) registering that info won’t change a person or control their feelings and behaviour in the future or necessarily pave the way to being distrusting – it just helps us to keep our integrity and our own reality. It also may prove to have no use with the person in question but if we experience it elsewhere, we will know what it means or it will click with us.

Time and experience has also taught me that being ‘right’ isn’t important or even the goal in listening to ourselves; it’s paying attention to those little pieces of information and observing, rather than judging. Better to listen and either confirm or remove your concerns (finetuning and learning on the go) than to ignore and learn nothing. That’s harmful in itself.

Tips For Avoiding Text, Internet & Other Lazy Communication Based Relationships
When You Experience Conflict In Your Friendships Because Of New Boundaries
Finance & Romance Do Not Mix. Ain't nothin' going on but the rent!