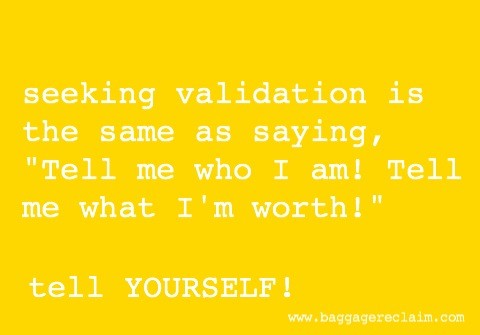 Whenever I ask people why they persist in seeking validation, whether it’s about who they are, their behaviour, or a situation, they tell me that they don’t feel that they could be objective about things. The argument is that they might be prejudiced by their own beliefs or too ‘in’ something to see it clearly and due to not valuing their own judgement or even themselves enough, it also means that even when they don’t trust themselves.

In feeling that they might be influenced by personal feelings (which of course you’re going to be to a degree when you’re thinking about you), seeking validation from others seems like the answer and creates this blind and rather dangerous assumption that others are ‘correct’, ‘factual’ and are uninfluenced.

If you find it difficult to trust your opinion on you or a situation and seek ‘balance’ by gaining objectivity from external sources, you’re also making the assumption that these people are objective in the first place because they’re not you, as if we’re all objective just as long as it’s not ourselves.

You may assume that they don’t have the same prejudices as you or the same things at ‘stake’, plus when you have a tendency to discount your own feelings, perception and opinion, you love making ‘experts’ out of those around you, even if they aren’t qualified to do so.

You assign value to their so-called objectivity because you love them or because you want them to like / love you. Maybe you think they’re very intelligent, beautiful, popular, respected by the community, or whatever it is that ‘hooks’ you and places them on a pedestal. If they have what you’d like, it can make sense to you that their opinion is valid and that if you listen, you could be just like them or at the very least find it easier to gain approval.

If you’re inclined to engage in a lot of self-blame and wonder what’s wrong with you when something goes wrong, you put so much of you into every situation that not only can you not be objective about yourself, but you can’t even be remotely objective about a situation or another person’s behaviour, or even their opinion. You’ll receive ‘feedback’ and even if you know that it’s not entirely true or very influenced by what that person gains by ‘positioning’ and portraying you in a certain light, that unwillingness to listen to yourself, to make judgements, to process feedback and to work out what can be kept and discarded, means that you’ll go ahead and agree with them while privately grumbling or feeling aggrieved at the injustice of their assessment.

A very common example of this is when you already believe that you have flaws that ‘scare’ people away and then you become interested in someone. Maybe they don’t reciprocate, or maybe they do, but you go on a few dates and it doesn’t work out for whatever reason and it’s “It’s because there’s something wrong with me”.

When you believe this and that you’re ‘not good enough’, you draw an incorrect conclusion that a stranger who doesn’t know you very well agrees with your judgement of you, hence you are correct to feel how you do about yourself.

Is this true though? What if this person you dated was influenced in their actions by the fact that they weren’t as ready to date as they thought, or they just wanted a few dates, or they recognised that they liked you but didn’t share the same values or whatever – how does this equate to you having flaws that scare people away? Let’s just say that it’s plain and simple not interested – the only way that this equates to something being wrong with you is if you’ve already determined this meaning anyway. To think this way, is to assume that your lack of interest in people is based on you recognising their worth, when really, you’re not interested.

What you of course forget, is that the very nature of seeking validation (which is confirmation that something is true as opposed to feedback which is generally two-way and information that you can take on board but may not choose or want to), does suggest to those whom you give license to, that you overvalue their opinion far too much, which communicates the wrong things.

It’s one thing if you ask someone you trust (and they’ve earned it and it’s mutual) to give you their objective opinion on something and follow it up with your own internal compass, but assuming that everyone else has more objectivity than you by default, is forgetting the fact that as humans we have a natural tendency to be influenced by our own experiences, perception, feelings, fears, beliefs, motivations etc.

You’re also devaluing you by default.

You live in your skin, think your own thoughts, move your own limbs, have your own values, and make your own choices. This isn’t to say that you should ignore everyone and never listen to anything, but what it does mean is that your feelings, thoughts, and actions have validity and ultimately need to be directed by you. Genuine feedback is two-way whereas seeking validation is one-way as you’ve already made up your mind but are just seeking confirmation.

When someone appears to agree with a negative assessment and conclusion you’ve drawn about yourself, it becomes “Oh… so they agree with me. Woah! What? They AGREE with me! But I wanted them to DISAGREE with me!” even though you didn’t really because you wouldn’t have been satisfied that what they saw you as was correct because you believe it.

This is why it becomes critical to address your unhealthy beliefs because when you believe something, the only thing that will really change you believing that is you.

Until you’re willing to budge from that position, all you’ll do is bumble through life creating a self-fulfilling prophecy that confirms your beliefs, not because they’re ‘true true’, but because you’re in some sort of Groundhog Day gravitating to people and situations that help you believe.

You’ve also got to stop believing that everyone else is right…as long as they agree with your unhealthy beliefs.

When you don’t know who you are or think you do, but it’s based on being your harshest critic, it can seem foreign to evaluate you, to judge a situation, or even judge another person’s actions. Until you’re willing to listen with love to yourself, to not judge yourself so harshly, to trust you, to be compassionate, to give yourself a break, how can you really listen to ‘feedback’ from others, and know who has your best interests at heart or at least isn’t influenced by their own shadiness or warped perspective? It’ll be a painful existence where everything looks and sounds like a reflection of you not being ‘good enough’.

It’s one thing to seek feedback but feedback becomes seeking validation when you won’t listen to yourself and use your own eyes and ears.

Ultimately, seeking validation is like saying “Tell me who I am! Tell me what I’m worth!” You tell you who you are and you tell you what you’re worth.

My books The Dreamer and the Fantasy Relationship and Mr Unavailable and the Fallback Girl are available from my bookshop.

This isn't love: You're in pattern, they're in pattern
Why You Need To Drop Convincing Out of Your Relationships
What Learning About The Special Effects in Apollo 13 & Titanic Taught Me About Future Faking, Fantas...