Are You Dealing With A ‘Chopper’? When Somebody Keeps Trying To Cut You Down 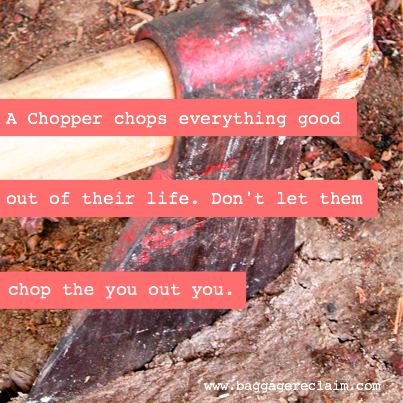 I’ve met and read about a number of people who’ve been involved with a ‘Chopper’, someone who finds your ‘hot spots’ or makes them up (yes really) and engages in criticism and mind games to knock you off your centre and chop you down. They’ll drain you of your confidence, weaken your defences, and bolster their own weak selves by chopping at you to ‘level’ you or even elevate themselves. Choppers and their manipulative, abusive behaviour are insidious – their true selves creep up on you and by the time you accept what you’re dealing with, they’ve often robbed you of the strength to leave.

Why does someone want to chop you down and even more importantly, how can you end up being sucked in by a Chopper and believing their crap?

What’s truly gobsmacking is that the Chopper has the audacity to judge and appoint themselves as ‘experts’ in the first place. There is likely to be a time early in the relationship, possibly unbeknownst to you where the Chopper perceived you to be ‘better’ and then they took up their mandate of changing this.

While some Choppers are obviously aggressive, it’s covert aggression often with a ‘Poor Poor Me’ attitude that somehow has them criticising you while portraying themselves as a victim. They’ll often point blank deny that what they’ve said is inappropriate and may accuse you of being oversensitive, no doubt adding another black mark to their mental dossier on you.

There may be subtle signs of what’s to come but the writing’s on the wall when they make an outrageous statement / accusation that you feel that you have to defend yourself against.

“You think you’re better than me. You’re so superior.” I’ve heard from a number of readers who’ve had the “superior” accusation and it preys on their worst fear because it’s something they’d already worried about. You’re likely to worry about this when you’ve been treated as if being intelligent or having achievements is a ‘bad’ thing that makes those around you feel bad. Next thing you’re downplaying yourself.

An ex of mine basically accused me of being shallow and said that I’d tire of him because my ex before him worked in IT and earned more money. It came out of left field and was completely untrue.

“You wanted to be with that guy/girl didn’t you?” and you’re thinking What the hell are they talking about?

“You’re going to cheat on me aren’t you? I can feel it.” Eventually it’s likely to be them cheating on you.

“You’re not as clever as you think you are you know….”

“I prefer a woman with bigger breasts / white / Christian…” and you have smaller breasts or are not white or are a different religion.

“I don’t know if I could be in a serious relationship or love someone that did _________” It is likely to be something really dumb. One reader told me that she was told off for dropping things and not being a good driver.

It’s important to realise that a Chopper has no shame about making something up. They know that they have you where they want you when you’re defending yourself instead of seeing this as a code red.

A Chopper wants to cut you down because it builds them up.

Unhappy with themselves and passive aggressively simmering with resentment, anger, and frustration, in their mind you ‘make’ them feel bad about themselves and so in turn, they deliberately say and do things to relieve that feeling, even though you haven’t done anything. They take out their insecurities on you. They don’t know how to receive love, never mind give it, and they justify their behaviour by believing that they act as they do because you’re not good enough for them to behave better, neglecting to realise that what they’re doing is about their own relationship with themselves and that if you were to do some digging into their past, you would see that they have form for this behaviour and you are just someone else that they’ve stuck their claws (and their axe) into.

Choppers have a convoluted and complex framework of truth and honesty which means that they give themselves license to be ‘honest’ (without respect) while at the same time telling lies.

I guarantee you – if you’re with a Chopper, they’re not being entirely truthful and no doubt if you catch them in a lie, they’ll turn it around on you. If they breach your trust and you tell them to jog on and then they weasel their way back in, you’ll be apologising. It’ll be “I want to love you but it’s hard when I feel like you don’t trust me. You have a lot of issues.”

It becomes an attempt to please the un-pleasable even though in the early stage of the relationship when they’re likely Fast Forwarding you and engaging in a spot of Future Faking that blinds you, it may appear like you can do no wrong. You’ll remember this phase of course, no matter how short it was before the code amber and red behaviour showed up and you’ll convince yourself that you’ve done something ‘wrong’ or that you’re ‘making’ them insecure. Don’t forget though, it’s the fact that they’ve misrepresented themselves or that you’re likely to see who they truly are that has them chopping at you in the first place.

A Chopper gets stronger and stronger, the weaker you get and the longer you stick around and at the same time, they actually have the cheek to lose respect for you. If you defend yourself, attempt to accommodate them, and stick around, they mark you down and it’s like “Ha! I knew that you weren’t so special!”

The Chopper latches onto your own private thoughts about you and based on your reaction or even simply remaining with them, they figure out where to ‘chop’. If you’ve shared anything with them that represents a previous hurt or any fears, heaven help you because they will be all over it like a rash. Another person would be empathetic and wouldn’t judge you – they’ll seize it as a weapon to use against you.

You might be vulnerable simply because you are already emotionally invested and you really don’t want to have to start over again or admit that you’ve moved too fast or made an error in judgement. If you value a relationship more than you value yourself, they’ll exploit that desperation.

The vulnerability likely stems from what you privately or even openly think of yourself. When you hear them saying it out loud, it’s your worst fears in 3D. Oh my gosh, it’s true! I’m not good enough because I don’t have the right body.

Even if some of the things that the Chopper says are not true or are stupid, if some of the other things they say tap into your fears, you may start to believe the lies or think the stupid stuff is important.

When you apologise for being and doing things that another person would think they were on crack to do the same, after the relationship ends, it can be shocking to face that you let someone like the Chopper tell you who you are.

When one reader who is highly successful, owns her own home, lots of friends, busy life, found herself being chopped down by an unemployed man who dodges his taxes, was living in her home rent free, was hardly Mr Popularity and didn’t have much going on his life, I was opened mouthed at the catalogue of verbal and emotional abuse that he’d thrown at her. Thank goodness she finally bounced his arse out. Yet she is still turning over all of the crap that he said.

Don’t get it twisted – being involved with a Chopper is a form of abusive relationship.

Never agree with someone who is running you down and taking chunks out of you. They’re wrong.

You are a beautiful, unique person – somebody will love and appreciate you without attacking the very essence of you. Stop agreeing with their treatment of you – it’s what gives them their ‘fuel’.

Their behaviour isn’t about you. You could be The Most Perfect Person On Earth – this person chops everything good out of their life. Just don’t let them chop the you out of you – get out.

Podcast Ep. 235: Delusions of Inferiority
"No one will love you better" - what the what now?
When Mr Unavailables and Assclowns Drip-feed You Info Part Two