You’re not going to crazy-make me! Why I won’t be making sense out of nonsense and you shouldn’t either! 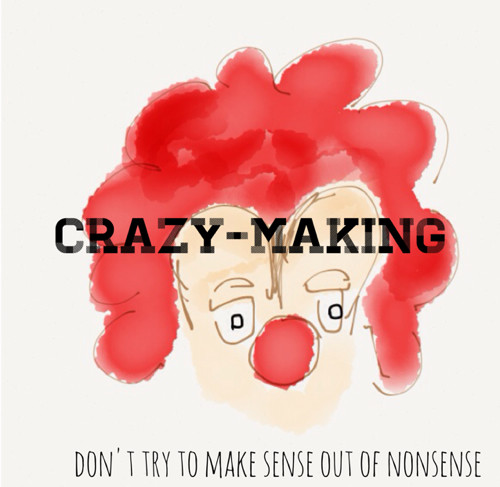 I’ve very recently had the highly disconcerting experience of someone pulling a ‘switcheroo’ in a situation where they were in the wrong, but by the time they were finished with their crazy-making attempts, they had positioned themselves as the victim. I know that I’m not alone in this experience because I’ve heard from so many people who have been left wondering:

I’ve said many times that life is a journey and it’s not a case of building up your self-esteem and then case closed. Life will throw things your way that put what you’ve been learning to the test and that ultimately remind you of who you are and valuable lessons that you’ve previously learned. Because I hear from so many of you who are still disorientated after having someone effectively pull a switcheroo and project their shadiness onto you, I wanted to share what I’ve learned…

Regardless of whether you want to be the victim or not, in their mind, there is only one victim and one ego.  When you express feelings, thoughts, and opinions that don’t chime with their agenda or you don’t do things ‘their way’, they feel under threat and will cut you down and do whatever they need to in order to reestablish their status quo.

The ‘switcheroo’ is seen in full effect when you say or show that they have overstepped your boundaries in some way. With more reasonable people, you can have a discussion and not be afraid of it turning into When Sharks Attack… You can say, “What did you mean by that?” without receiving an onslaught of a character assassination. With someone whose comfort zone is victim, asserting your boundaries is seen as disrespecting theirs, even though they have little or no respect for yours.

In the time it takes for this person to respond (it could be as little as seconds) to you asserting your boundaries, you are temporarily in what they regard as their role – the victim. Even though they may deny recognising that there is an issue, what they do recognise on some level, are the same things that they would constitute as being over the line with them, or they may recognise it because it’s not the first time that they’ve been at this juncture.

Instead of discussing, arguing even, apologising, clarifying or whatever, their next and subsequent responses are about becoming the victim again, possibly through what they consider their best lines of defense – guilting and attacking. The tone will change, possibly gradually or dramatically. You may be told that you’ve misunderstood, that you’re oversensitive, needy or whatever and yet they either don’t seek to explain what was meant or, what they say and do next compounds the original boundary bust. If you point this out, they’ll also say that you’re still misunderstanding… or attacking them.

If you try to defend, even if it’s respectfully, you are ‘wrong’, ‘difficult’ and ‘provoking’ their behaviour and other such guff.

If you respond with the irritation, anger, frustration, upset and other emotions and behaviours that situations like this can rightfully elicit, you are also ‘wrong’ and possibly accused of having anger management issues… while they’re shouting at or even physically attacking you.

If you’re talking normally, they keep saying that you’re angry and eventually after they’ve found the right ‘insult code’, you do get angry and you’re still ‘wrong’. In the meantime, they may choose to be matter of fact in their insults without shouting so as a result, claim that they’re not insulting you and that you’re… oversensitive.

If you try to back away, you might be accused of trying to ‘make’ them look bad or it might even be seen as an admission of guilt.

Whatever you’ve said about or to them becomes what you’re now guilty of.

Whatever they’re saying and doing also becomes what you’re responsible for.

Anything they say is the truth and voicing an opinion. Anything you say is lies and distortion. If you repeat what they say, that’s also a lie and distortion. Am I making you crazy yet?

For extra effect, especially if you’re related or they’ve known you for a while, or they’re just petty anyway, they start Bringing Up Old Sh*t. Family in particular like to bring in everything but the kitchen sink.

If you so much as attempt to refer to anything from as little as five minutes before, you’re petty and Bringing Up Old Sh*t.

The only thing you really can do is get off the phone or away from the situation as fast as you can, preferably while saying as little as possible because it doesn’t matter what you say – the ending of this is already made up in their mind. You’re just a prop in their drama.

It’s very easy to fall into the trap of attempting to make sense out of nonsense. Believe me, I’ve been ensnared in that trap many a time, often as a child…

Don’t try to make sense out of nonsense.

I don’t ask why it’s going to hurt if a car runs me down – I don’t step out into oncoming traffic and I try to be streetwise.

If a car is coming towards me and the driver is someone I know and they’re not slowing down and driving straight at me, I’ll be damned if I’m going to stand there asking “Why are you running me down?” while they’re revving their engine at me and telling me it’s my fault that they’re behind the wheel and driving at me when they’ve had more than enough time and chances to stop and back away. They’re running me down – what more do I need to know?

None of the behaviour of someone who pulls this crazy making bullshit on you is normal. Oh it might seem normal if you’ve grown up around this carry-on or become acclimatised to it with someone but it isn’t and it sure as hell won’t feel like it.

What I can tell you with no equivocations is: it’s not about you.

Now get the hell out of dodge.

Future Fakers: Understanding Why Someone Fakes a Future With You
Love Lessons: When You Can’t or Won’t Ask Questions of the Man You're Dating/in a Relationship With ...
Love Lessons: Getting The Relationship You Expect, Not Every Man is Worth Keeping & More