There really is no pleasing unpleasable people, and that’s OK 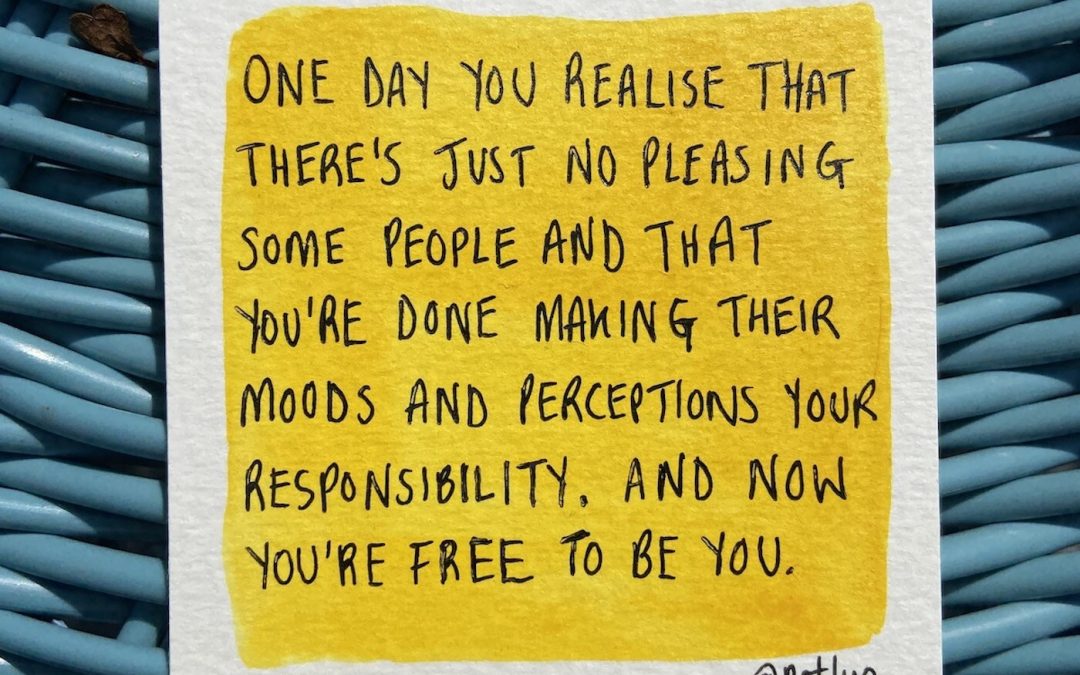 Something I’ve come to fundamentally understand in adulthood is there’s no pleasing some people. And it’s not because you didn’t try hard enough or that there’s something wrong with you–some people don’t want to be pleased. Unpleasable people don’t want the good times to last, and they don’t want you to get too comfortable. They’re very immersed in the narrative that you and the world are perpetually disappointing. It’s their identity, and they will look for something to be wrong or create problems.

The harder you try to please them, to win them over, to make things ‘good’, the more problems. You wind up underscoring their distorted perception and expectations.

As twisted as it sounds, your efforts become flaws to them (and a rod for your back). The unpleasable person perceives something lacking [about you]. Your continued efforts in spite of their malarkey imply that you need them to be pleased. From there, they exploit the power imbalance and the lack of boundaries that accompanies trying too hard.

When you’ve grown up with or become accustomed to spending time around unpleasable folk, trying too hard becomes as natural as breathing. Not having a healthy boundary that says ‘I won’t break myself for you or continue to allow you to overstep’ becomes your role and the status quo. But subscribing to this dynamic plays into the fantasy that one day they will, not just be pleased but stay pleased. And that’s not true.

Put a foot out of place with an unpleasable person and you’ll quickly see that your relationship was teetering on the brink.

No matter how OK you thought things were, it suddenly becomes clear that this is and was an illusion. Even when things are good, there’s a part of them comparing you to something or someone else. They’re setting traps or waiting to strike the drama match on anything remotely flammable. Or, further down the line, they make a throwaway comment or bring up old sh*t you didn’t even know existed. It becomes clear that things were far from OK when you believed they were. In fact, unpleasable people give themselves creative license to bring up something from two hundred years ago but don’t allow you to mention something from two minutes ago!

Think of being around unpleasable people as you’re either wrong-footed now or later. Pick your poison, but keep it real either way.

There’s no pleasing some people, and that’s OK.

You could be The Most Perfect Person That Ever Did Live TM or the most obedient and dutiful daughter or son, or the hardest worker or whatever, and they will still find a way to communicate the equivalent of “You missed a spot.”

What’s made a huge difference in my life is acknowledging the truth: we (myself and the unpleasable person) are not ok. This is liberation, not condemnation.

It’s accepting that person and the dynamic for who and what they are without judging you for who they’re not. When you stop keeping up appearances and no longer prioritise things looking OK over actually being OK in yourself, you don’t have to be at the mercy of an unpleasable person. Find the sweet spot (if there is one) of the relationship where you can engage with them without destroying your inner peace and wellbeing. Go about your business.

Seeking validation from an unpleasable person will turn you into someone who is perpetually displeased with themselves. When you make it your vocation, your role in life, to please others, you lose yourself.

Stop trying to micromanage their feelings with your pleasing ways. It’s not ‘pleasing’; it’s the fuzzy boundaries of over-responsibility. Let them be pissed off or miserable if they want to be. Know that it’s not about you even when they say that it is. It’s not your job to fix or change their feelings. When you know you’re being authentic, you know that you have your back and are being boundaried. Be yourself. They’re gonna be displeased anyway!