Self-Esteem: It’s Not All About Your Childhood – It’s About How *You* Feel About You & Whether You Internalise Your Experiences 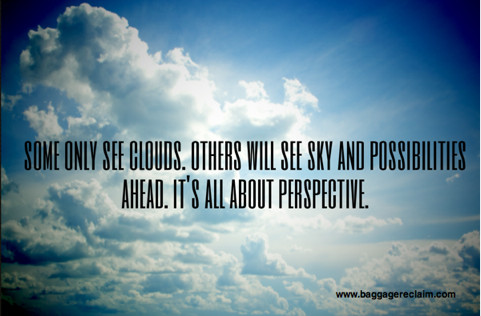 I talk to a lot of people who feel daunted by the prospect of improving their self-esteem or making changes to their habits because they think that they’ve had too many problems or that because they’ve had a certain type of childhood, that it’s going to be too difficult or even impossible. Many assume that it’s only people who haven’t had ‘proper’ problems or who have had ‘good’ childhoods that can do these things with ‘ease’, but aside from this not being true, it’s a mentality that can shoot one in the foot.

During the Time Before Baggage Reclaim, a number of people summed up my behaviour and various experiences with “It’s because your father wasn’t around”. Now I’m not saying that this isn’t true (it played a big part), but that doesn’t explain something that I’ve observed time and again since I started writing Baggage Reclaim back in 2005:

There are people out there who had idyllic, great, good, OK childhoods and who have great relationships with both parents and in fact even have both parents still together and even siblings in relationships / happy, who have low self-esteem and get involved in unavailable and very shady relationships.

Equally, I personally know a lot of people who had difficult upbringings, had an addicted/absent parent, and have experienced tragedy and trauma,… who have good self-esteem and aren’t battering themselves in unhealthy relationships.

What this tells you is that it’s not all about the childhood or the parents. It can tell some of the story but not all of it, not least because we might have been adults for a significant period of time while making unhealthy choices.

I know from personal experience and observation that what we experience in childhood, especially when it’s unhealthy and contributes to shaping our view of ourselves and the world, does inform our habits in adulthood when we’re not conscious of the impact and are unconsciously repeating thinking and behaviour that doesn’t work for us. We can also be aware but feel powerless to evoke big change.

Our experiences can end up changing us because of how we interpret them. We can experience disappointment and rejection and it can change how we feel about ourselves even if right up until that point we actually felt good about us.

We can also have The Best Upbringing In The World, but if we chop at ourselves by engaging in comparison, never feeling good enough and doing stuff like seeking validation and people pleasing, our insecurities can be compounded.

Self-esteem is very much about how you feel about you. With what can seem like the pressure to pursue happiness, to be coupled up on Noah’s relationship ark, to essentially get our sh*t together, to meet impossible standards put forward by society and the media, it can feel like we’re working to reach a destination, which means that you may be under the mistaken impression that until you feel like you’re at this destination, you can’t go for what you want.

There is no destination; you’re a work-in-progress on a journey.

Technically, based on my parents, my family background going back a few generations, my childhood and the experiences I had until I went through some significant personal growth, I’m effed up. By that token, what am I supposed to be doing? Not getting on with my life? Living on the fringes of my own life in unavailable relationships until I’ve worked out all of my issues? Purlease. I’m human. I still have issues!

The difference is that these things don’t dominate my life, drive me, inform my opinion of me and my beliefs, and anything that becomes current for whatever reason gets dealt with.

Due to some ‘conflict’ over our wedding, my age old father issues got taken out of the attic again last year. Why? Because things that I’d previously ‘folded up’ neatly and dealt with became unsettled by some incredibly painful revelations and realisations. My perspective was realigned and certain things that I’d believed since I was a child got scratched off the record. When life began to calm down in September, the feelings (and the silence on both sides) became difficult to ignore, as did the physical symptoms showing in my health and I had to face it all and grieve.

Does me having some pretty big issues to deal with last autumn mean that I should have questioned my worth as a person or the quality of my life or my kids or Em? Was I not supposed to feel this pain because I have a man (he’s just a human being, not my salvation and remedy for every issue), am married with kids, have grown my self-esteem and write here at BR? Er, no. I can be happy, enjoying my life and have problems.

It’s all about how you think about you.

It’s not about how much problems you’ve had – I know lots of people personally and through BR who’ve had major problems and experienced some pretty horrific stuff, but they’re still standing and have found their way to self-love and loving relationships. I also know of many people who found their way into relationships that they thought would be a fix-all and instead it’s been like stuffing all of your bills under the carpet. They’re married, with kids, and buried under the same problems. I also know of a lot of people who haven’t necessarily experienced major traumas but they for whatever reason, just don’t like themselves and it affects their confidence and their perception of their capabilities so they spend a lot of time in ‘safe’ relationships…like fantasy ones.

We are very hard on ourselves. We judge aspects of our lives and perceive ourselves as ‘handicapped’. We assume that what we’ve experienced is a hindrance or even that we’re ‘marked down’ or even ‘soiled’ as if we can only have a shot at love if we have a clean relationship bill of health or do it with an assclown – on that reasoning, there’s no way in hell I should be married!

We’re so busy thinking that we’re not enough and comparing, that we decide that everybody’s lives are better or that they have it ‘easier’ than us. We assume that single equals desperate and problematic and that if someone has a ring on their finger or has kids, or someone to call their own, that their problems are solved. You only have to read about mental health, cheating and divorce to realise, that shit doesn’t make sense!

Stop judging you as unworkable. Stop thinking that you’ve got to be perfect. Get on with living your life well in line with your own values, instead of trying to cultivate a you that will be perfect enough to be given an exit out of your own life into coupledom with someone else.

Trading On Your Looks & Sex Appeal Part 3
Is He Going To Leave His Wife/Girlfriend For Me? Part One
Are you inadvertently dimming your light? When you have a pattern of being afraid of outshining
Share this...