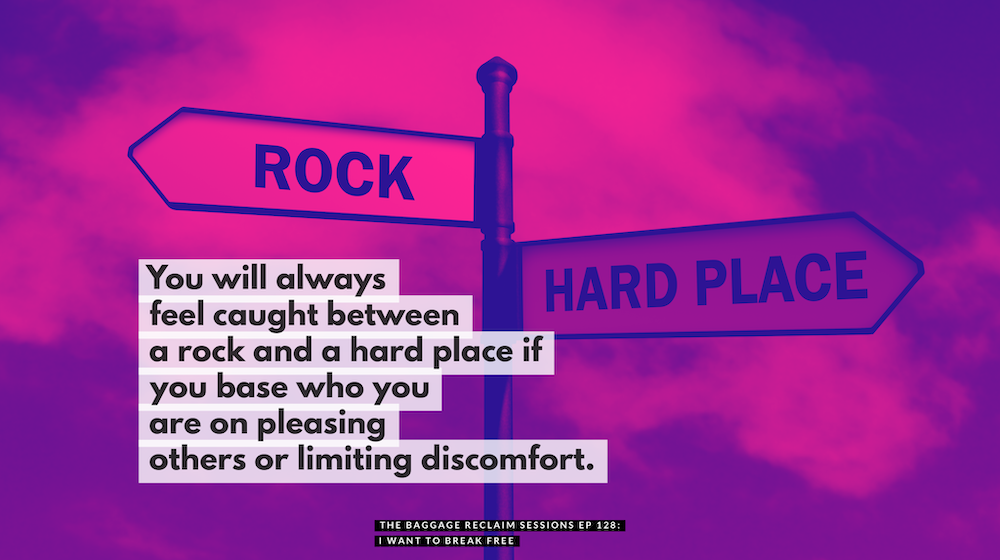 Do you sometimes feel as if you’re typecast in a role that on the one hand, you derive a sense of purpose or value from, but on the other, it’s a rod for your back? This week’s episode of The Baggage Reclaim Sessions is a deep dive on roles so that you can understand why you’re stuck in a limiting pattern and begin to take steps to break out of it.

First, it’s about understanding what playing a role actually means. A role is a job or function that we take on within our interpersonal relationships in order to ‘be good’ and ‘help out’… even if what we’re doing is harmful instead of helpful. I illustrate roles with almost seventy examples and share thought-provoking questions to help you get grounded about yours.

Roles block intimacy as well as our potential and purpose.

The Saviour, The One Who Saves The Family

The Messed Up One

The Strong One, The Weak One

The Favourite, The Successful One, The Broke One

The One Who’s Second Best, The One Who Always Comes Last

The One Who Always Helps Out

The Underachiever, The One Who Mustn’t Do Too Well

The One Who Always Backs Down

The One Who Acts Up

The Helper, The Fixer

The Firestarter, The Scapegoat

The Victim The Striver

The One Who Is Always Pleasing

The Truth-Teller, The One Who Always Sticks Their Neck Out

The One Who Has To Fly The Flag For The Family

The Pretty One, The Not-So-Pretty One/The Ugly One/ The Unattractive One

The Quiet One, The Loud One, The Shy One

The Keeper of Secrets

The One Who Comes Out On Top

Understanding the role(s) you play within your interpersonal relationships

How our perceived entitlement to what we want is keeping us stuck and why we need to challenge what ...
10 Instant Drama Reduction Fixes
Did they just do a U-turn? When a person overestimates their level of interest or capacity for commi...