Protecting a loved one from the wrong crowd 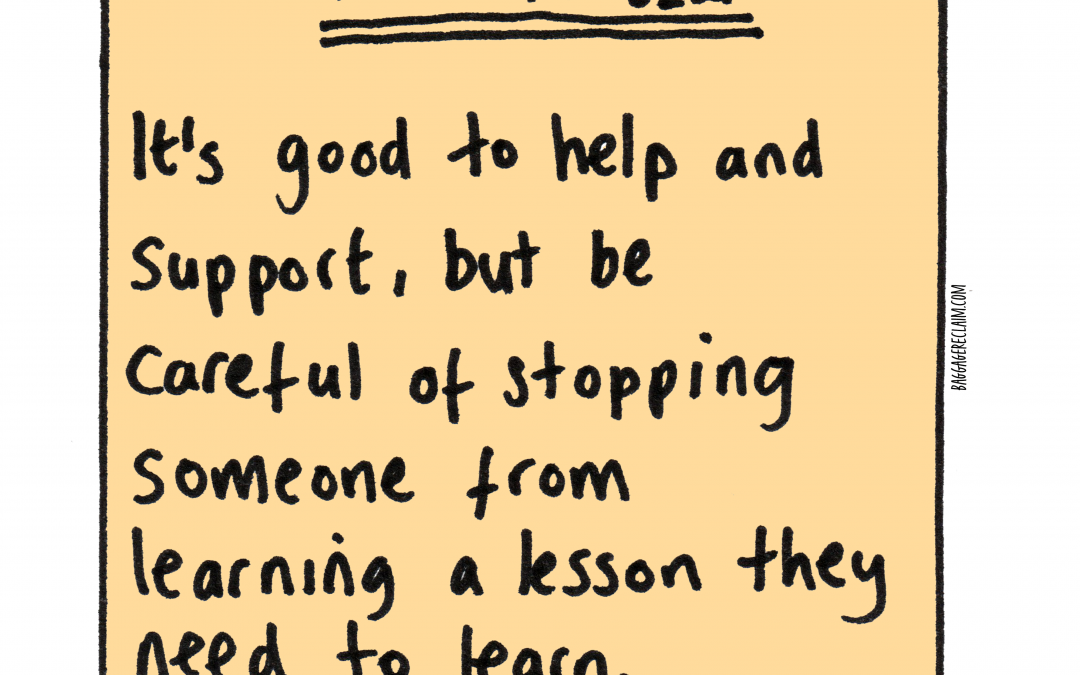 While doing a big sort-through of Things I Always Intended To Publish, I found this note (and my response). It delves into what can often seem like the blurred lines between help and support.

My son is in substance abuse recovery. He’s always picking the wrong person, which makes sense because he has no self-esteem. He is between relationships and in treatment right now.  How can I help him with his self-esteem?  Now is a good time for him to focus on himself.

I know someone who’s battled addiction on and off for almost two decades. His family have tried to move heaven and earth to help him, spending a small fortune along the way and sacrificing whatever they could. Whenever he gets back together with his old girlfriend, they always feel relieved. She’s a “steady influence” on him. When he’s with her, he works. He doesn’t hang out with the wrong crowd and appears to have his life together. What they’ve had to recognise, though, is that they, of course, want to support him, but if they’re always fixing his life for him and he’s babysat by The Good Girlfriend, his recovery is always on a precipice. They are all well-meaning and love him dearly, but they are also enabling him.

I, too, am all-too-familiar with seeing a loved one struggle –one of my brothers was sectioned six years ago. Since then, he’s been in various forms of treatment. He’s definitely been prone to falling in with the wrong crowd, too. I’ve veered between anxiety, helplessness, anger and grief. It’s hard to see a loved one fall and struggle. We’ve all waded in at times wanting to try to ‘fix’ the problem. Things only really started to improve though once it became clear that he’s firmly in charge. We can’t use our fear of what might happen to control him.

There’s a temptation when you think that you can see what an issue is, to want to jump in there and steer things so that you fast-forward to where they’re in a happier place. Or, you want to steer them away from all of the obvious dangers that you see but that you think they don’t.

I share this because it’s crucial to adopt the ‘support’ rather than ‘help’ approach. Otherwise, your efforts will inadvertently feed the problem. Instead of depending on substances, he’ll depend on you or a mix of the two. I think also when it comes to family, we can find it difficult to have healthy boundaries. Our attempts to be helpful and supportive might put the person in a ‘child role’ or have us being the rescuer to the victim.

Help is what you do when you don’t think that person can do it without you. But also, when you seek to help in this way, it means that your son might always need your help when actually, you want him (hopefully) to take flight on his own by having the freedom to learn from his journey while knowing that he has your support.

That means that whatever you do to support him, it’s with the view that it’s until he no longer needs your support.

Support means that you’re there for him even if he doesn’t do things your way whereas help is about him relying on you to get better. It’s because of the latter why outside help like the recovery program your son has entered is crucial. It’s boundaried help that keeps each party in an adult (and responsible) role.

When you consider things from the perspective of support, it then becomes about, How can I support my son’s own efforts and aspirations?

Being in treatment isn’t a linear process, and unless the root of his substance abuse is addressed, it will be a case of cutting off the heads of the weeds and leaving the root. Your son’s self-esteem is based on external factors hence why he doesn’t have any. He has looked for external solutions to the internal issue of how he’s feeling. Building his self-esteem is about him changing the way that he feels about and treats himself.

Your son has to want to be better more than he wants to be high but he also has to be willing to make that commitment, something that will depend on whether he has any sense of the alternative life he could be leading. Someone can know in theory that they would be better off not doing something or making certain changes but unless there is an understanding of what’s on the other side of that discomfort and a genuine desire to have what’s on the other side, they will backslide.

When your son also has an understanding of the cues and triggers for his habit and then has the means to learn how to self-soothe and respond in a different manner, his confidence and sense of self can begin to grow. Through the self-work of his recovery process, he will grow in self-awareness and self-knowledge, allowing him to know, like and trust himself.

The more that other people figure out his stuff for him, the less confident he will feel. In turn, this feeds the underlying narrative supporting his addiction.

Part of your son’s learning experience is picking the wrong people, and now it’s about him understanding why. Until he understands the hole that he’s trying to fill, he will be receptive to the wrong crowd.

Of course, as his mother, you are understandably afraid that he will relapse or fall in with the wrong crowd. It’s about striking that balance between ‘I know you have a problem and here are a couple of things that I’ve checked out that could be of real benefit to you’ and ‘I know you have a problem and I don’t think you can figure this out without my intervention’. Everything goes back to boundaries — and that’s part of how you support him in building his self-esteem.

Take time to understand the recovery program he’s in so that any suggestions you make are based on understanding where he’s at. Ongoing dialogue instead of assuming what he might need can also be more collaborative. If the suggestions you make are about improving overall wellbeing rather than ‘Maybe this can fix The Problem’, this also helps. Understanding his learning style or even leading by example makes it easier to support in ways that he’ll be receptive to.

Keep in mind though that one of the simplest but paradoxically hardest ways of supporting him is to show trust and faith in him that he can and will get better.

In some of the tougher times, my mother would say that she was “leaving it to God” but would become frustrated when her efforts to help were rebuffed, or he did something that she saw as a sign that he was not ‘fixed’ or ‘better’. Fear about what might happen and not trusting that things would improve meant that her efforts were, on some level, about speeding things up or controlling the outcome. This is 100% human and understandable, but it becomes a source of pain and frustration. It also creates boundary issues.

You are your son’s mother, but you also need to have an adult-to-adult relationship that supports healthier boundaries. That will mean checking in with you about ‘the why’ (your intentions) behind something you’re doing. It’s part of the rebirthing process of his recovery. This shift in the dynamic from adult-to-child will be very uncomfortable for you both, but it will also be healing. So, no, there’s no magic bullet, but creating healthier boundaries and also taking care of yourself will support your son in his desire to be better for himself.

Podcast Ep. 94: We Are Allowed To Grow (Yes We Are!)
If They Won't Cosign To The Truth, It Doesn't Invalidate It
People-pleasing and the fear of 'inconveniencing' others
Share this...