Podcast Ep. 121: The Release & Relief of Giving Up On Try-ing 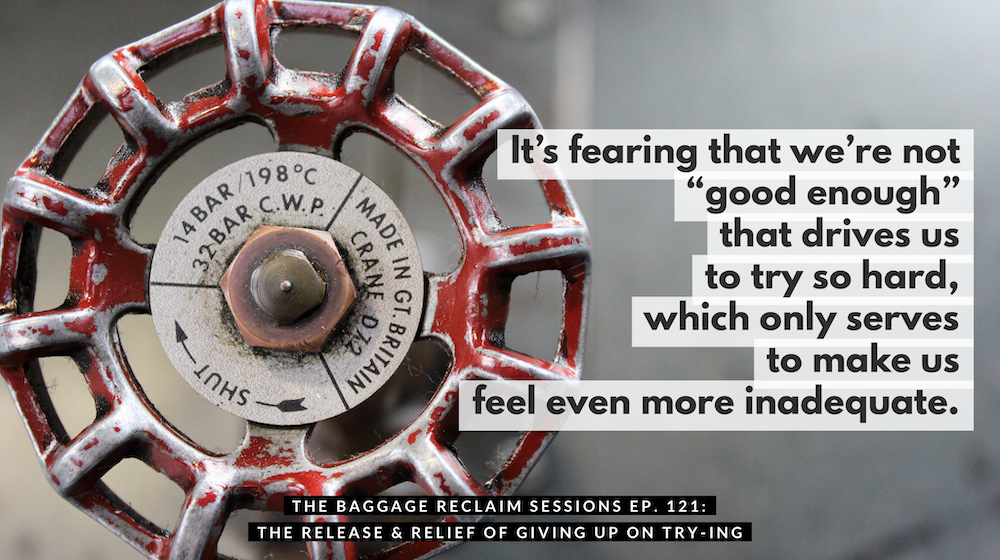 Happy New Year! After a couple of weeks break, it’s time for a new episode of  The Baggage Reclaim Sessions. I’m kicking off 2019 by delving into a tricky but much-needed subject for discussion: recognising when we’re trying too hard with someone.

Fact is, in mutually fulfilling relationships, in healthy interactions, there isn’t this trying energy to things. We are ourselves. There isn’t this vibe of “I need to try this so that they will be/do X”. We don’t think things like I just try so hard. I just keep trying. No matter what I do… No matter what I try…  These are the symptoms of trying too hard.

If you feel as if nothing is ever enough for a certain someone in your life whether it’s your mother/father, a partner or whoever, this episode is for you. A lifetime of in some way, shape or form feeling and believing that I’m “failing” as a daughter no matter what has woken me up to the realisation that enough is enough.

Anything that makes you fundamentally less of who you really are is a problem that’s going to lead to pain.

What a lot of people don’t realise is that a lot of their energies are invested in try-ing. Trying to please others. Trying all the time to win people over. This is how we end up saying “I don’t understand… I try so much… No matter what I try….”

We don’t realise that the way in which we present ourselves to others is by showing up by default from a place of I have to try that much harder because the underlying belief is “I’m not good enough”. If we weren’t on some level aware that we believe that we’re “not good enough” or that we think that that person thinks we aren’t, we wouldn’t feel the need to put this trying energy into things.