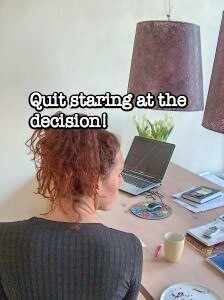 Let’s imagine that you’ve been frustrated for a few months about your diet and after giving yourself a hard time and lamenting that you don’t feel good, you finally make the decision to go on a diet. You decide you’re going to lose ten pounds, that you’ll go to the gym three times a week, and cut down on certain foods. After the initial decision high, within a few days or weeks, you begin complaining that ‘this’ is really, really hard. Much of your time becomes consumed by staring at the ‘forbidden’ food and trying to restrain yourself from eating it.

You don’t like what you’re feeling now because it feels like you’re denying yourself and that’s starting to feel worse than when you were unhappy with your weight.

In your daydreams, you imagine what would happen if someone came to you and offered you, for example, a tub of Green & Blacks white chocolate and raspberry swirl ice-cream. “I’m not sure I’ll be able to resist it!” and you imagine how it will taste and how you’ll feel while you’re eating it. Instead of renewing your efforts and ensuring that you have mini milestones where you can pat yourself on the back and even reward yourself, you’re consumed with feeling bad about the decision you’ve made and fantasising.

In fact, you’re so preoccupied with busting your proverbial nuts over acting in your best interests that you’ve forgotten the many months you’ve been utterly miserable.

It’s not long of course before you have an off day at work or you’re just frickin worn out with having to fight the temptation, and your resolve finally crumbles. Once the ‘high’ has passed, you feel bad again, only this time it’s about ‘letting yourself down’. In the end, you might just think “Eff it!” and abandon the diet all together. Each time reality nags, you bury the thought and eat some more, although you don’t feel any better about your weight either. And lather, rinse, repeat.

This may sound vaguely familiar to you. It may well be because you’ve experienced this with an actual diet, but actually, this is what many people go through when they make a decision, such as ending a relationship that wasn’t working for them, or they even cut contact.

Just like staring at a bar of chocolate and hoping that the impulse will strike you to resist it is futile, so is staring at your phone wondering if they’ll call, why they haven’t called, are they having the time of their life while you’re sitting there trying to have the willpower not to call, and whether you should call your service provider to see if there’s been a ‘fault’.

If I kept staring at someone’s Facebook page and tracking their movements, I’d backtrack on my decision too – talk about torment!

Jumping out of your skin each time a text comes through, or refreshing your email and checking your junk folder is equally futile. Going through the motions of life saying that you’ve ‘made’ a decision or that you’re No Contact (NC), and then running the I’m Going To Think About ‘Them’ Although I’ll Pretend I’m Not application in the background is like running on the spot. You may also have the I Wonder Why I’m Not Good Enough application, along with the I Wonder If I Made The Right Decision application running.

Of course, the more of these memory and mind hogging ‘applications’ you have open, or the longer you have them open for, or in fact, the more you load on them causing them to exceed capacity, is the more life and energy hogging they are. If you go back on your decision, you won’t be happy to return to what made you unhappy.

Some of us don’t like to deny ourselves anything, unless it’s reality which is a whole other post. Particularly if we have negative associations with being ‘denied’ something that stems from childhood, it can make doing something that you know is good for you feel bad, in turn making it very difficult when you’re not committed and firm with yourself, to not be reactive, short-term, and impulse driven.

Really, you don’t want to be rebelling against yourself.

We do have to opt out of certain things and behaviours sometimes, just like we also have to exhibit some self-control and look at the medium to long-term picture. Turning down things that do let us feel good in the moment but give us a longer hangover, is us acting in our own best interests.

Having limits is boundaries – we’ll all need ’em!

I’m off the ciggies nearly eleven years – all the previous times I gave up, I was half-hearted, not doing even half the action required to make staying off them real, and I’d mentally be lighting up as soon as I smelt one.

If you’re thinking sheer willpower alone is going to get you there, I wouldn’t count on it. Some of us have been trying to willpower our way through relationships and that hasn’t panned out!

When I had to do NC with the guy with a girlfriend when we were working in the same office, I stopped mooning at him all day (that’s looking at him all doe-eyed not flashing my bum), made myself super busy, filled up my mind, poured out my thoughts in words instead of trying to convince him by talking the crap out of myself, and took it a day at a time and then a week at a time. In fact, the first few days it was like an hour at a time.

There’s no point in starting NC and then saying “I don’t know how I’ll make it through the week!”, because you won’t make it through a few days never mind the week with that kind of talk.

How about getting through one frickin day? And then the next?

Print out a calendar and fill it up for two whole weeks at the start of NC or after you’ve made a decision. Think about what you’ll do if you get the urge and what you’ll replace the impulse with – quite a few readers hit the treadmill, go for a walk, or call/see a friend or family member.

Stop staring at the problem after you’ve made the decision.

Stop staring at your ex whether it’s literally or figuratively, and put the focus on you.

Have a plan. Make a list of all of the reasons why you made the decision and any time your resolve weakens, consult the list – so many people have used the NC checklist from the NC mail to validate their concerns. Having evidence gives strength to what you’ve already done – made a decision.

Don’t make your whole plan about avoiding contact or avoiding thinking because there’s a lot of energy that goes into avoiding something. Make a plan for how to take care of yourself which of course will only help to support your course of action and decision.

Good decisions don’t always feel good initially. It’s not like the universe claps you on the back and throws you a golden ticket for doing what you needed to do anyway.

Stop expecting that if it’s the ‘right’ decision it’ll feel good. Some of you have been high on the relationship crack and felt good off a bad decision that later felt bad.

Some of the best decisions in life hurt like crazy and particularly off the back of something that actually had you trading yourself down, it’s actually a sign that you need to stick with it – you’re getting out of your comfort zone. I thought I’d die when I cut off my ex and now I realise what a drama queen I was! The right decision doesn’t always feel good but it doesn’t stop it from being right.

And before you ask, here’s a post on helping you make and stick to a decision.

Advice: Help me understand how my emotionally unavailable man has been treating me
New Year: Grab Life By The Nuts
Normalising Bad Behaviour in your Relationships