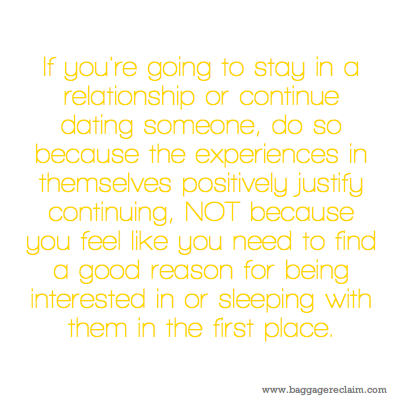 A few years back, before I delved deeper into the subjects of being afraid of making ‘mistakes’ and perceiving recognition of a date/relationship not working out as a ‘failure’, I explained the danger of putting yourself in the Justifying Zone.

This is that slippery slope that many people find themselves on after becoming emotionally attached or being sexually intimate. I’ve heard from readers who went out with someone for anything from months to years who they recognised with as little as a day that there was code amber / red issues or that they weren’t interested or that there was a clear conflict of values. They all continued because they felt like they had to ‘prove’ that there was a good reason for being interested, involved, seeing potential or just plain ‘ole having sex with them.

It’s like, “I wouldn’t normally be so crazy about someone / sleep with them on the first night / let them Fast Forward me and so when I realised that something wasn’t right, I had to look for reasons to justify why I’d done these things in the first place.”

The Justifying Zone is like retracing your steps or trying to retrospectively do the discovery phase of dating. You’re out together and they say something that under any other circumstances wouldn’t be a big deal but now you’re mentally punching the air thinking, YES! I KNEW I wasn’t crazy to sleep with them. Later you see a code amber or red behaviour and think @!$% and your insides are gripped with panic. You’re probably mentally beating yourself up for ‘getting it wrong’ too.

All this looking for justifications malarkey ties in with this theme I’ve mentioned in a couple of posts recently about being ‘tight-fisted’ with time, energy and emotions so we’re dealing with people and sometimes being people who don’t want to continue dating without trying out the ‘sex merchandise’ as quickly as possible, or we expect some sort of ‘guarantees’ before we’ll be less skeptical, or we somehow expect to find ourselves in a mutually fulfilling relationship without arriving with and continuing with a basic level of trust and healthy beliefs.

If you’re going to stay in a relationship or continue dating someone, do so because the experiences in themselves positively justify continuing. i.e. just because you both had sex or you felt really interested in them at the start does’t justify continuing if you have since found out things or had experiences that alter your perspective and feelings.

When you put yourself in the Justifying Zone, there’s a tendency to act like you have ‘budget’ and that you have to justify every expense on there and provide receipts and goods to your accountant.

You don’t need to stay dating or continue in a relationship to justify your original interest or the fact that you slept with them or even the fact that you once believed them when they said that they were going to leave him / her.

People unfold. What you ‘know’ at the start is an impression. There’s no point thinking “How could I have got it so wrong?” because you hadn’t found out anywhere near enough to be ‘right’ in the first place. People unfold and that means that there’s nothing wrong with revising your perception of someone or a situation. Why be mad at you for being curious about someone as if you’re supposed to be psychic and only interested in people who are ‘right’?

It’s just interest. The fact that you are or were interested doesn’t mean that you must remain interested. It’s an expression of interest, not an automatic precursor to them being ‘right’ for you. Our feelings don’t always have the person and the relationship to back them up. It’s a pain and it hurts but not as much as it hurts to try to ‘make’ them.

It’s just a date.The whole idea of dating is discovery. You can afford to go on a few dates with a person to find out if you want to continue. Really.

It’s just sex. That’s not to belittle the ‘specialness’ of sex or it’s importance to you but the fact is that if you want sex to be that special, it’s best to hold off until you have done a hell of a lot more due diligence because sometimes you’ve got to call a spade a spade and admit that it’s just sex or even that it’s just great sex with someone who’s just not that special. It happens. Look, I’d love to tell you that on the end of every great lay is a great person and your happy ending, but a lot of people who are very good at sex but not so good at relationships are good at it because they have a lot of practice.

There’s no sex in the world that’s worth you losing your dignity by acting like a bailiff chasing them down for a relationship debt.

If you’re the type of person that struggles with the emotional repercussions of dating, becoming involved with someone or being sexually intimate, you have an even bigger duty of care to ensure that you go slower. Or, at least be prepared to cut your losses. It’s just outrageous to hear people creating Justifying Zone Relationships out of what amounts to weeks, days or even hours! They’re just not that special.

A person knows that if they’re able to show you a more dubious side of themselves within hours, days, or weeks and you’re still there, that you’re very receptive to boundary busting behaviour and illusions, and you may even be marked as ‘desperate’.

You don’t need to justify your interest or involvement with someone but what you do need is bloody good reasons to continue and they should be reasons in existence not ones you need to pluck out of the air or gain from retrospective dating.

An audio version of this post is available on Soundcloud.

Chasing the Bad Boy: Do women thrive on drama?
Passive Aggression in Relationships Part 2
What Makes You Cheat?