Revisited: They’re Just Not THAT Special 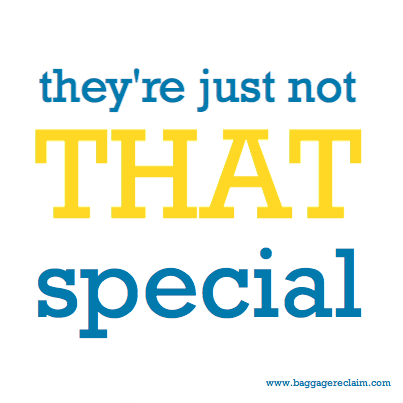 Every week people share their stories of outrageous treatment and what it’s like to be on a crumb diet and I frequently repeat what has along with FLUSH!, become BR’s mantra; they’re just not that special.

They’re just not THAT special that you should diminish you. If someone is all of the great things that you believe them to be and/or that they claim to be, you should be able to coexist without battering your self-esteem.

They’re just not THAT special that they can treat you like Dialalay.com, Dialanegostroke.com or an activity pack to pass the time with on rainy days. They either respect you within a mutual relationship or go and use someone else up.

They’re just not THAT special that they can show up and ship out whenever it suits. This is not a Pay As You Go ‘Relationship’ on the Booty Plan. The funny thing is that when you tell them to jog on, suddenly Houdini can’t be gotten rid of.

They’re just not THAT special that you should stand in as their punchbag, or be verbally abused, or be subjected to the mind effery involved in subtle and not so subtle forms of manipulation and control. There is no such thing as acceptable abuse and nobody deserves it. When someone has the power and opportunity to abuse you, they’ll take their ‘axe’ and chop away at you. Stop denying, rationalising, minimising and even over-empathising with them – get.out.

They’re just not THAT special that you have any business being their option. Newsflash! There is somebody out there that will prioritise you but that is only going to happen when you accept nothing less than being a priority. If you’re willing to be an option even if it’s in a passive manner, an option is what you’ll be.

They’re just not THAT special that more than a year after it became clear that they were talking out of their bottom and that they were only after an affair, you’re still there replaying their hot air over and over again as if you’ve missed out on The Perfect Person. If I could creep around behind my partner’s back, try it on with you, show you that I’m shady and still have you pining after me after all this time, I’d believe that I was THAT special.

They’re just not THAT special that you should be falling in love with a profile on a dating site, because it sure as hell isn’t the person that you’re falling for. I hear from people who feel excited just by the words on a page.

They’re just not THAT special that they need to be checking their dating site responses while they’re on a date with you! What they can’t even wait until they’re in the bathroom, or wait for it, after the date? FLUSH!

They’re just not THAT special that you should or even ‘need’ to give up your friends, family, interests, passions, money, dignity and your sense of self.

Updated 29th October 2012: An audio version of this post is now available on Soundcloud.

Sometimes the self-compassionate thing to do is to count your stresses so that you gain perspective
Relationship Advice: Help! He's left his wife but I'm still the Other Woman!
Too Hot to Trot: A Guide to Dating the 'Beautiful People'
Share this...