About Going In With An Open Mind 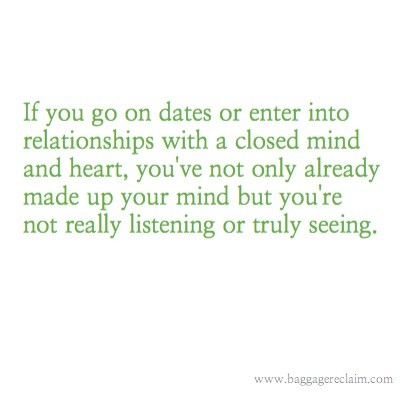 For some people, when they go on dates, they end up being guilty of this dangerous optimism where they’re basically acting like they’ve won the lottery before the numbers have been called. They’re ‘buzzing’ and ‘spending the winnings’ in their imaginations, hopeful that this date is ‘it’ and they’ll have a ‘happy ending’. But then it’s also safe to say that there are some people out there dating and in relationships who are pretty skeptical. They’re waiting for the other shoe to drop, to be screwed over and just don’t believe that it’s going anywhere, or that they’re liked / loved, or that the person doesn’t have some dark motives.

Why bother to go on dates if you think that they’re not going to get past one date or you’re convinced that there’s something wrong with all of them? It’s the same if you go out there thinking that you’re not ‘good enough’ and that it’s only a matter of time until they see it. All you end up doing is being on high alert for disappointment and assholery or doing the equivalent of auditioning for the dating equivalent of the X-Factor, which puts them on a pedestal. These mentalities don’t allow you to hear or see what’s going on. How can you judge a date you haven’t been on or a person that you haven’t gotten to know?

It’s like when people slag off books they haven’t read (I know someone who seems to be an expert on how rubbish 50 Shades is yet she’s never read it. At least I read 100 or so pages before my head could take no more), TV shows they claim are rubbish but they seem to know a great deal about the current storyline’s, food they’ve never tried or places they’ve never been.

Equally, what’s the point of pushing ahead with a relationship even though you’re in turmoil with skepticism? Everything you think and do will be affected by it and you won’t allow yourself to be vulnerable enough to forge true intimacy and commitment. You’ll keep your options open or be skittish or outright jumpy with your partner because there’s a part of you that wants to enjoy yourself but then you’re worried that if you really allow you to enjoy yourself and let go, that you’re going to be abandoned or screwed over.

If you’ve ever gone along to something that you’ve pretty much written off before you even got there, do you really experience it?

That’s the problem with skepticism; it doesn’t help you hear or see, but it also means that you’ve more or less made up your mind. Then you try to say that you’re “OK” but you know that you’re bullishitting.

Bearing in mind as well that so many of us have an issue with admitting when we’ve made a mistake or misjudged something, often skeptics enjoy something more than they let on and/or recognise that they’ve been mistaken, but would rather maintain their original position. They’re scared of letting go of it.

It’s not about going in blind but if you have that much doubt and cynicism, wouldn’t it be better to get your own head in order rather than participate in Groundhog Day? It’s essentially resigning yourself to being ‘fatigued’ about everything and expecting to be disappointed.

We have a tendency to gravitate to situations that keep us in our comfort zone. It’s why I hear from so many people who don’t feel good enough and who have trust issues, who then involve themselves with people who exacerbate that sense of inadequacy and who give them reasons to have trust issues.

I’ve also found that no matter the quality of the relationship, if you have trust issues and won’t believe that you’re as loved as they tell you that you are or that they’re not doing or going to do what you’re afraid of, the relationship isn’t going to work anyway.

It would be better to deal with your trust issues first and then embark on relationships. It is not the job of another person to teach you how to have a trust system no more than it is the job of ‘everyone’ to challenge your skepticism.

Remember though, it’s not about being blind or naive but it is about coming from a positive place with an open mind and heart which is more authentic than going in with distrust, doubts, and skepticism but acting or even claiming that you feel differently and hoping it will just ‘go away’ without you having to trust you and use your own judgement skills while interacting – yes you can do both!

I know it’s not easy but I also know that a closed and fearful mind never leads to a happy, open outcome. Address your relationship with you, know your boundaries and operate with a debit and credit trust system based on reality and instead of worrying your busy mind, you can get on with the business of living and deal with something if and when it should arise instead of being on high alert for danger and laying in waiting for it.

Trading On Your Looks & Sex Appeal Part 2
Transitionals & Rebound Relationships: What's on their mind when they're not over their ex but they'...
Dating Advice: Should I make a move on my distant guy?