It’s Not The X Factor: Stop Treating Dating Like You’re Auditioning For An Expert Judge 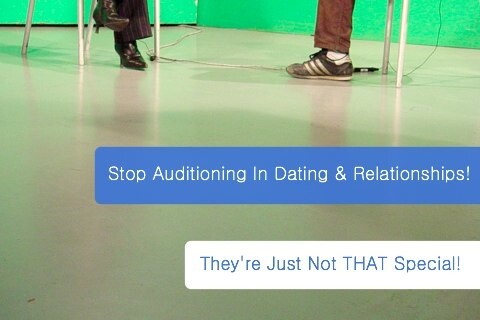 ‘Rejection’ within dating and relationships is widely treated like ‘auditioning’ for a part and then failing to get the role. Think about this for a moment: It being treated like an audition means that someone always holds the power from the outset and your fate is being put in their hands. You have to interview, perform, demonstrate, convince – handing over all of your power in dating is like telling the other party to kick back and relax because you’re going to make all of the key effort. Based on what? They’re not God, a higher power, or that special!

What kind of expertise or power are you granting people? Which characteristics, qualities, and values are you assigning them that you can immediately or very quickly ascertain that you need to put on your costume? That they go to church? Have been in the same job for a gazillion years or are just very good at their job? They have big breasts or are well hung? Beautiful? Super-intelligent? Ph.d in People Picking? Good with animals and children? Money and status? Chemistry? Common interests? Good sense of humour?

Not one of these are reasons to demote yourself and act like you’re auditioning for a relationship.

Now you’d like to think that people who have the power to decide someone’s fate get it right every time, but yet there are a tonne of actors, authors, dancers, singers, job interviewees, successful entrepreneurs, sports stars and the list goes on, who have been rejected, and many of these have gone on to be more successful than people who they were rejected for, and many of the remainder are still trying. The ‘experts’ don’t always get it right and do back the wrong horse and often end up gritting their teeth or are even embarrassed at their failure to recognise a good opportunity.

That said, many of these same ‘experts’ believed in their own judgement at the time which may have been prejudiced by their mood, ego, favouritism, or any number of other factors that actually have nothing whatsoever to do with the fundamental talent, ability or whatever of the candidate. They didn’t have the vision, the patience, the creativity for it and ultimately went with what they felt was the right decision at that time. And it was the right decision – they snoozed, they lost.

They may regret their actions and reach out, by which time, the ‘passed over candidates’ have hopefully moved on and found success elsewhere, with someone who recognises their value. It’s similar in relationships.

What’s the difference between the person who experiences rejection in these circumstances but perseveres anyway, and the person who takes that person’s ‘judgement’ as ‘final’ or at least as an indictment of their abilities?

Belief – self-belief, belief in their work, their product, their service, their talent, their abilities, their experience etc that it will happen one day.

They keep trying, they keep knocking on doors, they where appropriate, take on feedback (hopefully from a respected source), they build on their strength’s, they work on any weaknesses, they continue to invest in themselves, and even when they waver or even have massive wobbles, they remember who they are and believe. They get back up.

This can be hard in dating…especially if like a salesperson that doesn’t qualify their ‘leads’ before they spend most of their time knocking on doors in a neighbourhood that isn’t the right target market for their product or service, you spend most of your time doorstepping in Unavailable Town or even Assclownville. It’s accentuated when you keep trying to convince that one or a few disinterested or half interested parties that keep throwing up objections, or when one person keeps calling you back for a wildcard ‘audition’ to try and convince them again, only to turn you down or make deal closing noises, only to back out at the last moment.

When all is said and done, you both have to choose and it’s got to be a mutual relationship, which means if you insist on behaving like you’re auditioning, at least do it on their basis that they’re doing it too – you’re both auditioning for a co-piloted relationship.

Hello! What do you think? What do you want? What do you need? It’s not all about them you know, especially when you don’t even know them to be handing over all of your power in the first place!

What about you? Aren’t you to be valued? Stop waiting for someone to scoop you out of a current life you don’t want and make your life for you. Aside from the fact that it’s too much power and responsibility to give to someone, if you took less of a passive role and weren’t afraid to be you and have boundaries, while you’d date less unavailable and shady folk, you’d be available for a mutually fulfilling available relationship and recognise one. You won’t be afraid to ask questions, to communicate, to have basic needs, to pick up the phone and you certainly won’t be abandoning your life so you can fit in with someone else’s agenda, often without being entirely sure of what it is, or knowing full well that you’re not on board with it.

The irony in all of this is that, if you stop auditioning, especially for people who you have no business elevating to expert judge status on a pedestal, you dramatically reduce the amount of ‘rejection’ in your dating life because whether they’re around for a hot minute, a few dates, or a relationship, you’re an equal and evaluating and choosing too.

When you stop auditioning for judges, your self-esteem will rise.

You won’t be thinking about things in terms of winning them over, which will prevent you from morphing and adapting to win a prize that you don’t even know that it’s a prize in the first place.

You’ll either both ‘get in’, or neither of you will, but the point is that you’ve either got to work together or go your own way. I’ve found in life that you have the people who want to try, the people who want to make the initial movements and then dump the load on you while enjoying the glory and the fringe benefits, and there are people who will ebb and flow, give and take, and work with you – trust me when I say that you won’t see this when you’re too busy worrying about pleasing someone and being accepted, treating them like the sun rises and sets on them. They’re just not that special.

And I should add – some of the people who didn’t know your value, or did, but thought that they could do better, will regret their decisions, but expect that you’ve found better. Some will regret, hunt you down (likely with a lazy text or Facebook message) and reel you in again, only to still have poor judgement. Hopefully you’re not secretly looking back and waiting around.

You could spend your whole life auditioning the crap out of yourself for one person or variations of a type, or you could know your own value and go where you’re wanted and can be equal – you won’t know where that is if you’re ‘auditioning’ and ‘convincing’.

Compatibility, Your Type, and Common Interests Part Two
Suck It and See To Kill Off Curiosity and Get Out of Relationship Groundhog Day
Advice: Help! I'm the Other Woman to the Other Woman: Does this sound like a man in love?