‘After everything I’ve done for you!’ – If You Feel Bad While Or After You Give, It’s Not Giving 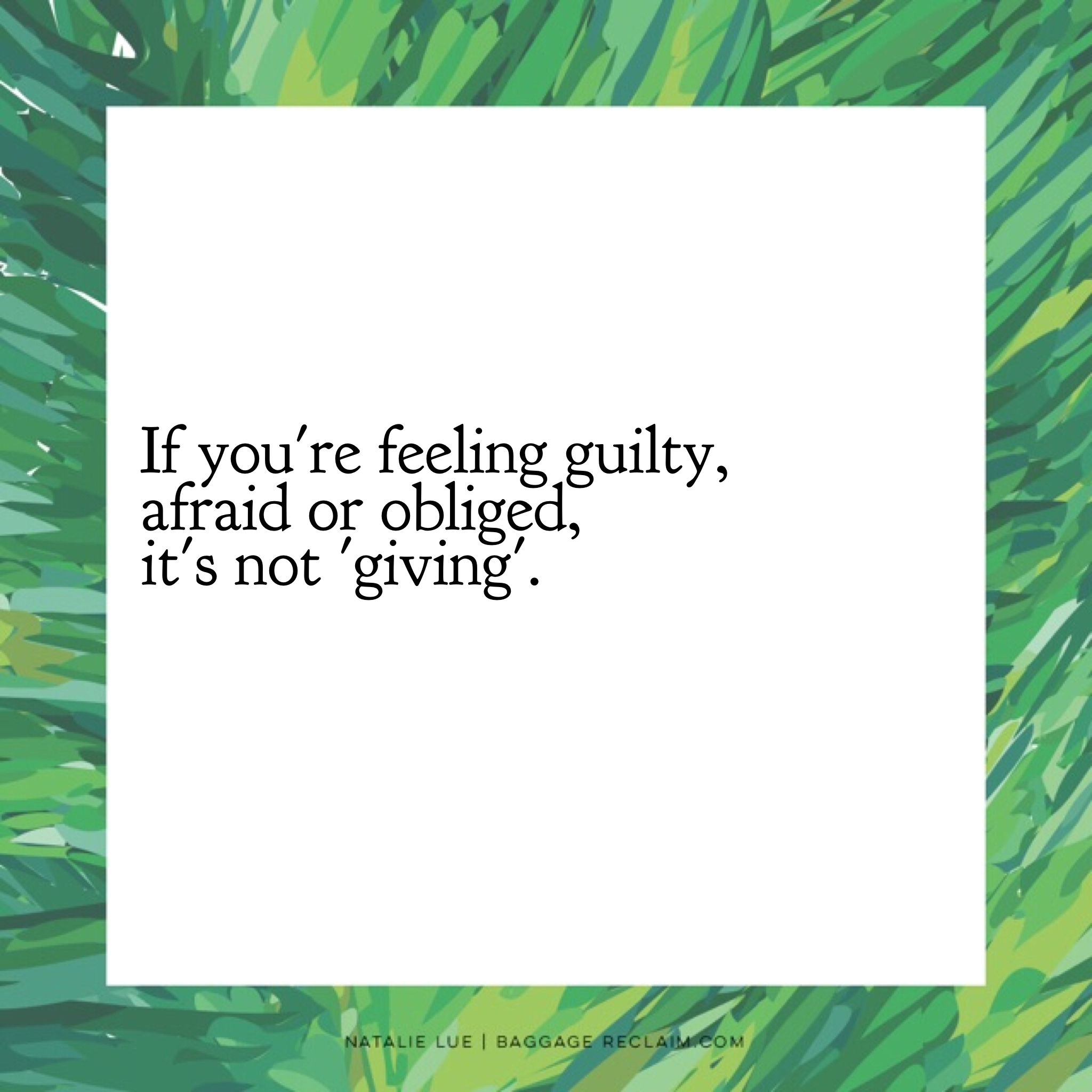 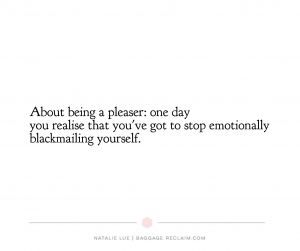 As a recovering people pleaser, I’m all too familiar with how we can feel like some of the most giving, generous people who are often underappreciated for their efforts. When we consider making changes, we feel caught between a rock and a hard place because we think that we will be regarded as ‘selfish’, ‘demanding’, ‘bad’, ‘mean’ and other such criticisms that are really designed to let the takers of this world keep taking from givers.

What motivated me to rein in my pleaser was that I recognised that I was doing good things for the wrong reasons. Yes, I was trying to please but I had a hidden agenda of ‘I’ll do this for you and you’ll give me what I want or spare me from unpleasant outcomes’.

What I wasn’t aware of is that people pleasing comes from what we feel we are obliged to do in order to be a certain type of person but to also gain love, attention, affection, validation and approval, as well as avoid conflict, criticism, disappointment, abandonment and loss.

In truth that means, ‘I feel that I have to do this ‘for you’ so that you feel obliged to give me what I want (or to spare me from unpleasant outcomes)’.

We all, well certainly empathetic folk, do things that despite our intentions, we in retrospect realise that it wasn’t a good idea or that we need to approach it differently next time. We learn from the experience.

When we’re entrenched in people pleasing though, so we don’t even recognise the habit as being an issue, or we do but can’t see another way to be, we keep doing the same thing and expecting a different tipping point result.

It permeates every area of our life and we feel resentful, victimed, powerless, helpless and downhearted.

Invariably there comes a point where we can’t take anymore and we’re forced to confront our pattern, no matter how discomforting it might be. We realise that, yes, people do take the piss, that we are always the one who, for instance, volunteers their time, sorts out problems, keeps quiet. backs down, overperforms, puts everyone first etc, and that we’ve had some pretty painful experiences, but we also realise that we are the common denominator. That doesn’t mean that we’re responsible for other people’s behaviour but what it does mean is that we have to look at what we’re bringing to the situation and calling ‘right’.

Remember that we’re often feeling short-changed, like we’re not ‘good enough’, and like nothing we do is ever enough, yet we still think that being pleasing is ‘right’.

We become aware of such a thing as boundaries (knowing where we end and others begin and knowing our line and our limit so that we live in line with our values) and realise that we are the key player in the management and creation of our own, but then feel genuinely perplexed and anxious about how cutting back on people pleasing isn’t going to turn us into a horrible person that everyone wants to argue with, criticise, reject and abandon.

And let’s be real: a few too many rides at the people pleasing rodeo mean that we’re left trying to figure out a new way to be without becoming bitter and suspicious.

It’s like, ‘Right, world! You’ve maxed out your credit with me and if anyone wants anything from me in future, they’re gonna be put through their paces. No one’s gonna get away with anything ever again’.

We put up a wall and get panicky about boundaries because we quite simply don’t know the difference between giving and sacrificing.

Giving is wholehearted, autonomous and authentic. It’s the free transfer of something so basically, it has no strings attached. If we are giving something with a specific expectation of what we should get back, if the other party is unaware, it’s not a give.

Similarly, if we decide to give (read: do or be) something because it’s just something we decided off our own back or we thought, ‘If I do this, they’ll do that, and then such-and-such will happen’, that’s not a give.

So, for instance, when I was involved in an 18-month affair with a co-worker, I felt entitled to him leaving due to my pain and suffering. I’d given him a grand ole time, made it super comfy for him, and in my mind, given him everything he wanted, and all without him having to cough up a relationship or even be faithful.

Newsflash: He did not ask me to do that. If I’d told him from the outset that this is what was expected, I can assure you that the affair would never have got off the ground.

Now, granted, he did make out like he was going to leave, how tricky the situation was, how he saw me as his girlfriend and blah blah blah, but all of this was in response to my dissatisfaction with the situation.

Truth be told, part of my people pleasing in life has been to pretend that I had less needs than I had, that things didn’t bother me as much, and that I was super independent.

Sure, I’m an independent person but truth be told, that people pleasing was really my form of self-protection that allowed me to feel safe while still trying to get what I want without having to admit that actually, I did bloody well have needs, things did bother me, and while I was independent in some ways, relationship wise I was codependent and acting out issues stemming from abandonment in childhood.

Now, you can apply this to anything you’ve been a pleaser about and that same truth will remain: you’re doing stuff that no one actually asked you to do or that they’re certainly not going to take responsibility for.

They’ll go, ‘Yeah, sure, I have asked you if I can borrow money off you on a number of occasions but if what you really wanted to do was say no, you could have’.

They’ll go, ‘Yeah, you did sleep with me, listen to my problems and feed my cat when I was away even though I made it clear that I’m clearly not going to give you a relationship, and yes, I did text you, but the fact that you did those things doesn’t mean that I should want to have a relationship and if you really wanted more, you should have told me to jog on’.

They’ll go, ‘Yes, you did go above and beyond at work and it’s appreciated, but that doesn’t mean that I can’t flag up an issue or that you have to be first in line for promotion, plus actually, if you’d asked me what I was looking for to promote, I would have given you far easier suggestions.’

They’ll go, ‘Um, yeah, thanks for never being honest with me and not trying to hurt my feelings but I’m a grownup, I didn’t ask you to hold back, and I don’t appreciate you unleashing all this pent-up stuff on me and telling me how I’m a bad friend for not being able to read your mind about something’.

Which brings me neatly to sacrifice, the act of giving up something of value for the sake of something else regarded as more important or worthy.

Being willing to make sacrifices is a part of life. We do it every time we make a decision because there are trade-offs to every decision. We say yes to something while saying no to something else. Sure, we can try and sit on the fence but it never works out well.

If we do something that involves giving us up, pretending to be something we’re not, and suppressing and repressing our needs, expectations, desires, wants, feelings and opinions, this is not giving—it’s sacrifice.

Just so we’re all clear, sacrificing yourself for a relationship isn’t giving; it’s degrading you. It instantly makes the relationship imbalanced and unhealthy.

People make sacrifices within their relationships but when they’re made from a healthy place, they become autonomous gives.

We do something not just because we want to but because when the other person gives, we don’t want him/her to come from a place of feeling manipulated, coerced and guilted, just as we wouldn’t want to either. We don’t want to keep score and say stuff like, ‘After everything I’ve done for you!’

When we feel obliged to do something, it’s an automatic precursor to guilt and resentment and so when it comes to the relationships we value, we gradually work out that we have to decide what we feel we have to do versus what we want to. Wrestling with a sense of obligation becomes a jump-off point for an honest conversation with ourselves and with the party in question.

We consider what the baggage might be behind our obligation, what our motives and expectations are including what we might be afraid of, and we also have to consider the consequences of doing it from a place of obligation, so how we might feel if we go ahead, but also how we might feel if they and life don’t meet our expectations of what we think will happen if we meet that need.

People pleasing is based on the idea that we are obliged to meet someone else’s need quite simply because they have it. To be clear, we’re not.

People pleasing is our attempt to say yes to ‘everyone’ while always saying no to ourselves.

What we don’t often realise is that some of our closest, most valued relationships, interests and causes get sacrificed because we haven’t figured out how to say no and be OK with someone being disappointed [due to us saying no] to meeting a need that we don’t have to meet.

We have to treat ourselves as a person of value and actually, that starts with taking responsibility and figuring out what our values are and living by them, instead of trying to shape shift for everyone. It’s realising that we hate feeling guilty and obliged, so why would we want to do that with others? It becomes clear that we can’t keep ignoring us and putting ourselves last and then expecting others to make up for it. We decide that if we can’t give it wholeheartedly, then we need to speak up about our expectations and be OK with the other person having a different viewpoint, because at least we’ll know where we stand and will have spared ourselves pain and problems. We can consciously choose our preferences, priorities and principles so that we feel like the worthwhile and valuable person we’d forgotten we are.

If you feel guilty, obliged or bad before or after you give, it’s not giving. The truth is, it’s time to stop emotionally blackmailing yourself. It’s a vicious cycle that ironically will leave you feeling far worse than if you’d said no.

Happy Birthday To Me: 37 Thoughts On Relationships, Self-Esteem & Life
Why do we want to be liked by people who we dislike?
The Modern Guide to Dating
Share this...

BREAK THE CYCLE OF EMOTIONAL UNAVAILABILITY, the online course, is here!