Advice: Can I keep it light with Mr Unavailable and bail out before I get hurt? 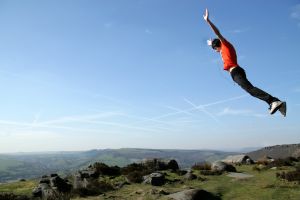 JJ asks “I have been hurt in the past and went into a long phase of meaningless two month “relationships” and one-night stands before deciding upon abstinence, when lo and behold I met someone. He’s everything I always thought I really wanted – intelligent, funny, outgoing, and hot – but never had the guts to ask for. HOWEVER I did not ask for him to have an ex-girlfriend who he also calls “his best friend.” Is that possible? She’s an awesome girl, and very cute. What’s keeping them from getting back together? I’ve never asked why they broke up because I didn’t feel like it was my business. Is it?

Also we’ve also discussed what we were in this for prior to hooking up, and we were going to keep it light — we met and had been friends for a month or so before liking each other. But what does it mean when he tells me “I don’t want to get all emotional and stuff. It’s not you, it’s just that I’m in med school and need to focus.” What the hell does that mean????? And is it really not me? I’m in med school too. He’s 27 if that means anything.

I’ve made it clear to him that I like him. I like him as a friend as well and figure if I get out soon enough, I could stop myself from getting hurt by him in the end. I keep thinking this is what I want for now, but what if I get attached? Do you think we have potential to progress beyond what it is now? This is what I want for now, but I like to keep my options open. What do I do? Should I get out now? Am I ignoring red flags or am I going with my gut?”

NML says: You’re involved with yet another emotionally unavailable man. Just because it now means something to you doesn’t make him any less emotionally unavailable. The big giveaway signs are 1) he’s pretty much told you by saying he doesn’t want to get “all emotional”, 2) discussing things and agreeing to keep it “light”, 3) lurking ex girlfriend, and 4) it appears that he blew hot for the pursuit and is now backing off. Oh and you’re emotionally unavailable and exhibiting signs of fearing commitmentâ€¦.

For a start, you freely admit that you were hurt in the past and went into a long phase of meaningless relationships that all seemed to last for 2 months, which was probably when it was crunch time. Diving into the meaningless is a classic reaction to hurt but it more often than not draws us into a cycle of being emotionally unavailable. We tell ourselves that we don’t want to get hurt, that we don’t want to get involved, and that we want to give ourselves time to heal but what we fail to realise is that the impact of being in these meaningless ‘relationships’ can last for far longer than we expect. By burying yourself in men that are emotionally unavailable and getting hurt in the mix, you erode your self-esteem further, you don’t deal with the hurt, and you become very distanced from actually knowing what a good, decent, relationship with an emotionally available man feels like.

In this case, you have gone from an extended phase of meaningless relationships to being with a guy who you think you want, probably because deep down you recognise that he’s emotionally unavailable and it’s going to end in tears like your previous relationships. You know that you can’t get more from him and your own actions are in conflict with your words. You say you want to be his friend but it’s clear that you want more from him.

Why is he friends with his ex? Well for a start emotionally unavailable men love the attention that they get with their blowing hot and cold behaviour and he gets off on knowing that you want him (or at least you think you do) more than he wants you. He’s friends with his ex because emotionally unavailable men tend to have narcissistic harems (several women pandering to them so that they get a collective rackload of attention and always have someone to turn to), they have lots of loose ends because they can’t commit to fully severing the ties from old relationships, and because by mentally spreading whatever little emotion they have thinly across their little harem, they get to remain emotionally unavailable but pretend to themselves that they must be great guys because they have female friends.

Why didn’t you ask why they’d broken up? Of course it’s your business to ask. You don’t need to shine a torch in his face and interrogate him but it is totally normal to ask why they broke up and what their relationship is now. I would hazard a guess and say that he pulled the “I’m not ready for anything serious/I want to keep things light/I want to focus on my work but I like you a lot card” on her too.. Many men call certain exes their best friends but our meaning of ‘best’ friend is very different to theirs. Theirs often means ‘best at being accommodating and slipping me a shag from time to time’.

Is it you? No it’s not you. Emotionally unavailable men are all about themselves. They don’t make decisions with you in mind. They think about what suits #1. However, it does become you when you pander to his emotional unavailability because if he continues being with you, it will be because you make it easy for him to continue with his crap relationship behaviour. It won’t be because he likes you more than he did when you started hooking up.

I’m going to be blunt – You guys aren’t friends. You’ve known each other for a wet month and have already complicated things by getting ‘involved’ with each other. I would save your declaration of friendship because you are only saying this to go along with the idea of keeping things light so that you appear to want the same thing and also because you want to keep him in your life. If you had known this guy for several months or years, I could say you guys have the basis of friendship but it is difficult enough when you’ve been friends for a long time, but you guys don’t actually have a friendship foundation. One or the other, or both of you pursued each other and now you’re both blowing hot and cold, claiming friendship.

Let me ask you something: If this guy wants to keep it light, doesn’t want to get “all emotional”, and wants to focus on med school, why is he getting involved with you? Why does he get involved with anyone when he knows that he cannot and will not give the required attention to the relationship?

If I was you, I’d bail out now, feel the pain, lick your wounds, and start to address why you continue to involve yourself in fruitless relationships. Whatever hurt you’ve experienced, you need to dig it up, deal with it, gain some closure, and move on. Identify your pattern, have a dating break, don’t have sex, and get back in touch with yourself, and find out what you really want before you get involved with anyone else. Unless you address what is really bothering you, you will continue to be with various guises of unavailable men.

Trust me, you ride this one out, and not only will you get attached to someone who is most definitely not going to get attached to you, but you will erode your self-esteem further. You can’t shag him into being more serious with you, and why should you hang around on the fringes competing for his attention with his ex and his study? Why on earth are you even prepared to? He’s told you what he wants and it is far from being good enough. He has defined the relationship, so why are you managing your expectations down to accommodate his BS? You can’t control how attached you get – You’re struggling already!

Keeping your options open? By the sounds of things, I think you’ve overdone keeping your options open and suggest you close up shop for a while…. You are ignoring red flags, you’re ignoring your gut, and you’re ignoring common sense. Unless you want to play sacrificial lamb, I’d jump ship now. Cut contact and let go of this idea of being friends. Trust me, in these situations..’friends’ always become friends that slip each other a piece where one person gets far more out of it than the other and the one who draws the short straw sits around hoping for more…Don’t let yourself be that sitting duck!

Under pressure! When someone claims that they're being pressured by you & how to deal with being pre...
Advice Wednesday: Have I Misunderstood My Ex's Unavailability?
Don't Typecast Or Pigeonhole Yourself In A Role That Takes You Away From Yourself