The tricky situation: I’m a 65-year-old widow of five years, (married forty years) going through my first relationship breakup since losing my husband. I broke up with my boyfriend because I couldn’t stand the mixed messages. I can’t understand what happened and keep ruminating.  He was separated (married 2 years), unhappy, and I was lonely–we had great chemistry. He came on strong but after 9 months, he hadn’t and wouldn’t tell his ex he was dating because “he didn’t want to hurt her”–claims he told her he didn’t love her.

She visits his house and wants to reconcile.  He’s been pulling away from me these last few months. Based on what he’s told me about past relationships, he seemed to act in a way that would cause me to do the breaking up so he wouldn’t have to. He always said he wouldn’t hurt me but I am hurt.  In retrospect, I think he always thought this was a short term relationship, maybe a time filler until getting back with his ex. I think he changed his mind about the separation. I also sense this is a pattern–he’s had many short-term relationships. His friend said the issue with his ex would never be resolved, implying that he’s done this before.  He fits all of the Mr Unavailable characteristics, could never discuss intimate feelings, is very secretive and is a poster boy for your red flag list— I ignored them because I was so lonely and somewhat naive. I’ve been No Contact for almost 2 months. Can I recover without ever really knowing the truth? I’m having panic attacks. I want him to know that I know what he did. Can I trust again at my age? Should I just be content to live alone?  My relationship vault is now in lockdown.

I am so very sorry for your loss. For forty years, you knew where you were at and now you’re not only having to try and figure out how to live on without your husband but dating has changed significantly since back in the day when you met him. I hear from so many people who were in long term relationships that started before there was putting a profile online, texting, sexting, swiping left and right, talk of Friends With Benefits and booty calls, and the list goes on. They step back into dating, not realising that not everything people show or tell you online is real and taking what can often be the intensity of Future Faking and Fast Forwarding as a sign of a “happy ending”, only to wind up very disappointed and disillusioned. It’s also not helped by everyone from friends, family, society and the media making out as if your last chance saloon has gone if you’re a woman over 25, and if you take any of that guff seriously and it plays into any insecurities, you’ll jump on any attention that comes your way as if it’s your last meal.

Another factor that amped up the intensity of things is that you had what I call a Starvation or Lean Period–this is a period of time where you are starved out of affection, attention and love due to being hard on you in some way, feeling brokenhearted due to a loss, and not really knowing how to take care of you.

You mention loneliness: sometimes when you lose a loved one, due to feeling on some level as if you don’t want to be a nuisance or a burden and/or some loved ones acting what appears to be differently or even lacking empathy, you clam up and stop expressing your innermost feelings and thoughts including to yourself. This causes you to feel emotionally adrift, often triggering you into looking for something or someone to take away those feelings. When you then feel interest in someone for the first time and/or they express interest in you, it’s distorted plus, if and when things go awry, it re-opens feelings of loss and low self-worth that you’ve attempted to squash down.

You want to love and be loved and there is nothing wrong with that. It’s a natural desire. Some of this situation stems from a need for someone to come along and fill a void and when you are looking for an external solution to something internal (unhappiness with you, not feeling “enough” and that you can cope on your own, wanting someone to take away your pain etc), this significantly impacts who you choose and what you will accept. 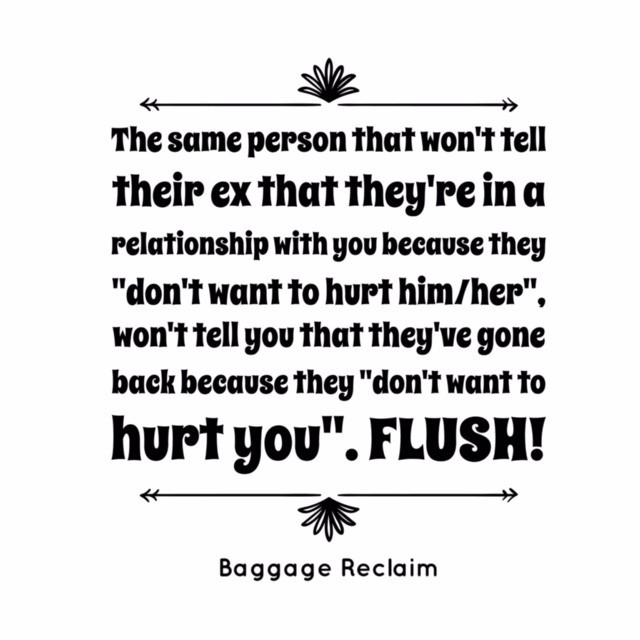 The thing about someone between relationships, so they’re not emotionally and/or legally and mentally over their ex, is that there’s a subconscious safety net. You don’t have to be as vulnerable as you would if they were genuinely free to pursue an out in the open, available relationship. It can’t ‘fail fail’ like you think an available relationship without restrictions can. This is a good time to ask yourself whether there is a part of you that’s afraid of truly putting you out there for fear that you will love and lose again?

The relationship was nine months and he pulled away for the last few months, suggesting that at least half of this relatively new relationship was in crisis–a code red alert. Factor in the honeymoon period where you don’t know each other yet and it appears that once normality kicked in and he had to show up and even follow through on promises, he passive aggressively edged his way out. He’s not out of contract and my spidey senses say that this is a guy who periodically gets his pants in a bunch, suddenly doesn’t feel like being married or committed, plays outside on the other green fields, and then goes back to wifey who has taken up the married Fallback Girl option of standing by her man and waiting for his tantrum to blow over. He’s not separated because he’s in the process of getting divorced; he’s having time out.

Courage is not your ex’s strong suit and he told you various stories as a subconscious means of dropping hints. He started something he could not finish. The fact that he kept insisting that he wouldn’t hurt you, aside from that being a promise that no one can make, it also suggests that you knew on some level that he was all shirt and no trousers and kept trying to get reassurance.

Here’s the thing: You already know everything–you just don’t like what you know and so you keep rejecting it, exchanging the truth for a set of untruths. What would him telling you what you already know do? What would you telling him do? You were there too. You have the truth right now it’s just that you are viewing it with the wrong perspective, stopping you from forming the conclusion that would stop your torture.

You’ve been involved with a Mr Unavailable who even if he claims it was not what he intended, used you as a form of escape from dealing with his inner problems and whatever is going on his marriage. Yes of course you are a grownup who has made choices but make no mistake: he has preyed on your vulnerability, your fear of being alone, and yes, your naivety. You were married for forty years–How are you supposed to have the experience to pick up on this man’s bullsh-t straight out the gate?

Accept what you know right now, wholly and fully. Stop trying to understand it or the situation to the nth degree. Yes, it is a loss that you have experienced (disappointment) but if you grieve it instead of beating you up, you will start to feel so much better. A great way of getting to the truth and healing from loss is writing Unsent Letters.

The panic attacks will subside when instead of rendering you helpless by trying to control the uncontrollable, you start taking care of you including taking responsibility for you. You don’t need to wait for a man to 1) be taken care of and 2) to have a good life. This would be a good time to attend grief counselling, to see your GP about the anxiety attacks, and to also look at social activities that you can partake in that will help you to not only meet and get to know people but to get to know you too. Let your loved ones in on your struggles. You will be OK. You’re never too old to love and you’re never too old to trust again. I know that life isn’t how you thought it would be but your husband no longer being here doesn’t mean his love is gone. Know also that when you love again, they’ve got to be someone that adds to your already good life, not your salvation. Don’t build a wall, build a better life for you with boundaries and self-care.

Each Wednesday, I help a reader to solve a dilemma. To submit a question, please email natalie AT baggagereclaim.com with ‘Advice Wednesday’ in the subject line. If you would prefer your question to be featured on the podcast, drop a line to podcast AT baggagereclaim.com. Keep questions below 200 words. If you want detailed one-to-one support, please use my consultation service.

When Your Ex Returns AGAIN, It's An Opportunity To Do Right By You
Advice: Does tragedy or trauma attract emotionally unavailable men?
Telling Them All About Themselves – Why It’s Not Your Job To List Their Flaws and Crimes