Don’t scratch the loneliness ‘itch’ with the wrong scratcher 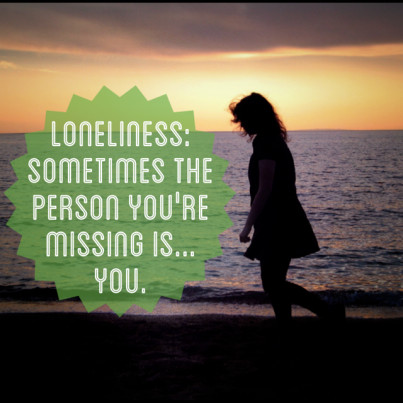 “I’m really lonely”, I’m often told either right before or after a painful story that loneliness is supposed to explain.

While sometimes I hear from people who are lonely and alone in the sense that they literally have nobody, I primarily tend to hear from people who are lonely due to a need for a specific type of company (a relationship in the general sense or a relationship that makes them feel X,Y, Z and does A,B,C and possibly ticks some dream boxes), or who just feel lonely due to the relationship they have with themselves – low self-esteem. In the latter situation it wouldn’t matter if they had one friend or a thousand because that sense of not having a place in the world and feeling inadequate would still exist.

I’ve heard from people who felt lonely and then sought out a relationship and then felt more alone than they ever have. Crumbs can leave you really hungry.

Loneliness is hard. It’s something that a lot of people struggle to admit to, especially when we are living in a time of parading faux friendships with follower and friend counts. I think that the way in which we keep in touch has also contributed a great deal to this sense of disconnect. Some people have got lazier as the opportunity to blame super-busy lives or hide behind technology has increased.

Sometimes, for whatever reason, you stop feeling connected to people with whom you used to have a lot in common. When your social circle lacks empathy about your divorce for instance or the break up of your long-term relationship, it’s as if they either don’t feel like they can attempt to ‘get it’ because they haven’t been through it or your changes throw a spotlight on their own relationships.

We don’t have to go through something though in order to empathise. We’ve all experienced loss in some shape or form.

Loneliness is a very real feeling but if you don’t seek to understand where it truly stems from as well as possibly understanding what may be some of your own isolating behaviour, you can end up soothing the feeling in an unhealthy manner and dependent on crumbs especially if regardless of say, your desire for a relationship, you don’t tend to treat you with love, care, trust and respect anyway.

When you don’t feed you and then somebody comes along and showboats with their crumbs, it can feel like finding water in the desert and it puts the other person’s efforts out of context.

The impact of online communication has a lot to do with the loneliness distortion that’s occurring. I regularly hear from spouses/partners who connect with their childhood / college ‘sweetheart’ (more like shiteheart…) on Facebook because they’re lonely in their marriages / relationships, possibly feeling neglected and also seeking to avoid difficult feelings, thoughts and situations. These exchanges provide a fantasy escape.

There are readers broken by involvements with people they’ve never met / seen or who they’ve only met on a handful of occasions but they’ve kept in touch by phone, text, email etc. These situations are surprisingly easy to fall into when you’re avoiding intimacy and protecting you from being vulnerable. These situations may feel like ‘home’.

The only reason why I felt comfortable with some fly-by-night dipping in and out of my life is because it’s all I’d known from my own father. On their return, it was as if, “Daddy’s home!” and of course I wasn’t going to show upset or raise any discussions as I didn’t want to ‘ruin the moment’ by being ‘immature’. The affair was probably my loneliest time – I felt isolated with the secrecy and my own torment.

Virtual connections and involvements with people who dip in and out or who just love a bit of loving from a distance can feel safe and they give a semblance of connectivity and yet eventually, someone will get ‘hungry’.

Mislabelling is also a problem though. People will say that they’re lonely for companionship, which is a sense of friendship and then get into a casual relationship (oxymoron alert), and because over time or even immediately it reveals itself not to be a genuine mutual relationship between friends or even lovers, they feel hurt. Of course they might want to get laid but they need the social connection even more.

Remember sexual intimacy isn’t the same as emotional intimacy and sexual interaction isn’t an automatic precursor to a relationship.

Loneliness is a very real feeling but if you tend to abandon you and suppress your own needs, wants and expectations (people pleasing), this is a chief contributor to why you feel lonely – you haven’t got your own back and you don’t know who you are or you do but either way you’re not representing. It feels damn lonely in these circumstances especially after whoever you’ve been doormatting for is no longer around – you haven’t got you or this person.

I suggest Meetup.com almost every day to readers, students and friends because it’s a great way of meeting people and trying new things / pursuing interests and hobbies in a group setting without the pressure of analysing the crap out of some dating situation. Sometimes I get, “I’m ‘too different’ to make new friends.” Look, I know we’re all unique but none of us are that unusual. Sometimes making out like we’re the type of person that’s very hard to know is a way of excusing ourselves from trying.

While some happen fast, most friendships take time. Despite what appear to be my extrovert ways, certain types of situations stress me out – like when my eldest daughter started school. After a firm talking to from Em about some of my ‘unfriendly’ behaviour, eighteen months on and I have friends in my neighbourhood!

Sometimes we expect everyone else to make the effort before we will, when in reality, being friendly is a two-way street with an element of risk on both sides.

There’s nothing wrong with wanting a relationship but regardless of whether you’re in or out of one, you still have to be your own friend and you have to cultivate the things that you need, want and expect in your own life. Not all of these rest on another party. Having real connections with others is a very important part of your life and by having a healthy relationship with you and fostering healthy connections with others, it paves the way for moving closer to finding a romantic partner if that’s what you want.

Loneliness is one of those feelings where if you scratch the proverbial itch with the wrong scratcher, you will get temporary relief but the feeling will return until you scratch it with the right solution – healthy self-soothing. Until you’re clear on what you feel and why (try a Feelings Diary) and you address it in a healthy manner, the loneliness will increase not recede. This is why people who soothe their loneliness with crumbs feel worse not better, but they still end up bloated on the crumbs and believing that it’s all they can get / deserve.

Work out how you feel and why, make sure you know your own needs etc., and evaluate how you’re going to go about meeting those needs in a healthy manner. What does loneliness look like to you? Are you genuinely uncared for? Do you value the connections and life you do have? Is all of it about a romantic partner or are some of the things you’re feeling, thinking and needing about something else in your life? What is it that you miss and how can you drive this?

PS I saw some comments over the past few days about people who have kids essentially not making great friends because they abandon all of their single friends. Not true. I actually had periods of feeling lonely during maternity leave but I, like a lot of people I know, hang out with single, attached and non-parent friends. Three out of four of the godmother’s of my children are single!

Moving past ambiguous situations: It's OK to take a step back when they say that they're not interes...
Not Reciprocating Romantic Interest Is OK but Dropping Hints Extends the Awkwardness
Attraction is prompted by instincts: If we lack self-knowledge, our intuition is off, which means ou...