It’s Just a Date, Not a Marriage Proposal & 9 Other Thoughts On Dating For The Weekend 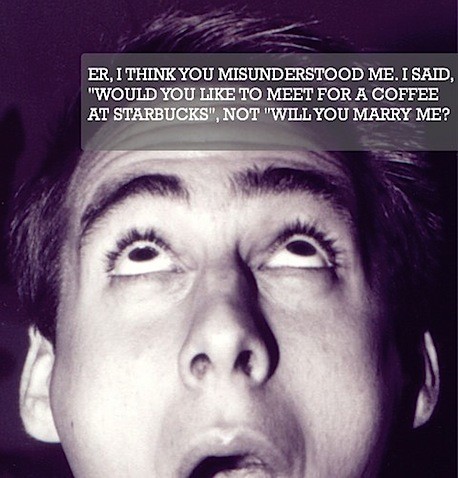 1. It really is just a date, not a marriage proposal, nor is it the start of your life, your ticket outta ‘here’ or anything else. It’s just a date. I’m not saying that with more dates, time and progression into a bonafide relationship that it won’t lead into something special, but for now, it’s just a date. I don’t know what is going on with us with our modern lives, but so many people are itching to offload the life they’re in and hitch their wagon to someone, anyone that will take them out on a date. They want this one to be it. It’s too much pressure that sets you up for disappointment or will have you Fast Forwarding. Appreciate and enjoy your own life and you won’t be so invested in something and someone you don’t know.

2. If you’re getting attached to every date or even every prospect of a date, you’re really not that fussy, and you don’t know what you want, other than you seem to want to be attached to someone. If you feel attached to and disappointed by ‘everyone’ you interact with romantically no matter how vaguely, how can you truly have felt something?

3. Know yourself before you sexually wreck yourself. If you’re the type of person that struggles emotionally after you are sexually intimate with someone and are likely to feel invested, don’t ‘get down’ until you’re on enough solid footing to handle the emotional consequences.

4. If you do have sex fairly quickly into dating someone, keep in mind that you may have to write it off. Is it fair? Well it’s not about ‘fair’ per se. Sex confuses things. While some people aren’t bothered, some will actually feel embarrassed about letting themselves get carried away and won’t know how to roll back, so they disappear. I mean, how do you go from having sex to holding hands and ‘getting to know one another’? It can happen sometimes, but it can be a bit like closing the door after the horse has bolted. I’ve also heard too many stories about people trying to roll back to chaste but they keep ‘finding’ themselves naked.

5. People unfold after you meet them, not this ‘changing’ BS. How can someone you’ve known a wet week or a month ‘change’? It’s not that you met them one way and then they ‘changed’ – it’s that you met them, you thought they were certain things, they presented their own thing, and then they unfolded. That’s what time and experience does – show you who someone truly is. As a friend of mine reminded me of the wise words of the wonderful Chris Rock, when you go out on those first few dates, you’re meeting their representative… and they’re meeting yours.

6. Unless they’re dead, or in coma, there really isn’t a good reason for someone disappearing on you. Remember this when they creepy creepy back into your life and expect to pick up where they left off (the Reset Button) without too many barriers to entry. The more they want to hit that button, the shadier they are. Now lift your hand up with me and push that mental flush handle several times.

7. If you don’t want to have sex early into dating, just don’t put yourself in the position (excuse the pun) to do so. It means you don’t have dates in your home, or go to their place afterwards, or invite them into yours. It’ll spare you the awkward “I know we have our tongues jammed down each other throats and are engaging in some heavy petting, but actually, did I mention that I don’t really want to have sex until I’ve gotten to know someone?” Yeah…

8. A date isn’t coming into your life to boost your ego, make your life right, or even pay your bills. Boost your own ego, make your own life right, and pay your own bills. Some of you are looking for salvation, not romance, and assclowns, people who at best want to take advantage of you or at worst, want to abuse you, will home in on you like sharks smelling blood in the water. Personal security is very attractive. There’s nothing wrong with a little insecurity (we all have them) but desperation isn’t sexy.

9. I’ve said this many times, but just because you’re dating someone or have even progressed into a relationship, it does not mean that you have to sack off your friends, family, interests, goals and aspirations as if this person is the be all and everything. They’re just not that special. I’m not saying that they’re not special but unless someone wants to isolate you and control you, you parking your life as you know it to become their Siamese twin and to live out of their backside is a one way ticket to an unhealthy codependent relationship. Have your own life before you embark on a relationship and keep your own life.

10. You are not auditioning on your dates and if there are any auditions going on, both of you are doing it. There is too much posturing going on and many people seem to cultivate lives and personas that they think might be attractive to their idea of a ‘perfect’ partner, when what they should be doing is cultivating lives and authentic selves that are attractive to themselves. The stories I hear are like a series of challenges in America’s Next Top Model, from how to look like how you think they want you to look, to rolling out your sexual moves, to trying to do everything for them, to being like an on-demand entertainment system (yeah like someone’s Tivo, only they press buttons for an ego stroke or a shag), to how much boundary busting can one person put up with. Enough!

We spend too much time trying to be the ‘right’ person for every person that comes into our lives because we think it’s super important to be chosen by everyone (like being picked for teams at school), but actually, we need to spend more time discovering whether someone is the right person for us.

Remember, dating is a discovery phase.

The Dreamer and the Fantasy Relationship is now available from my bookshop along with with Mr Unavailable and the Fallback Girl. You should definitely be reading these if your imagination gets carried away when dating or you’ve wound up in a number of unavailable relationships.

Quiz: Are You Making These Common Dating and Relationships Assumptions?
Bastard Syndrome
We can't always recognise potential issues - it's just important to have an active response as they ...