Advice Wednesday #4: My Ex Exacerbated My Insecurities By Objectifying Other Women–How Do I Move On? 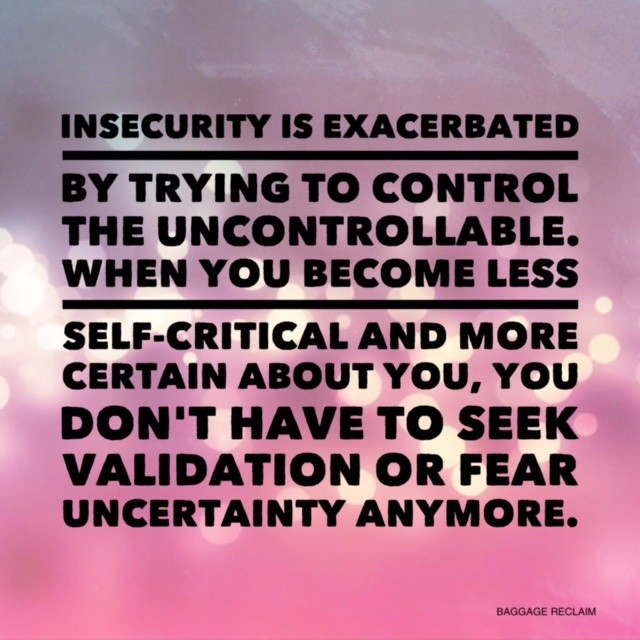 The tricky situation: In my last relationship, the problem of emotional cheating was a really big insecurity of mine.  After reading your blog and starting a Feelings Diary, I came to understand why I was insecure about it and it boiled down to me not being happy in the relationship and me projecting. That said, my ex also gave me reason to worry including talking about other women in sexually fetishistic ways–it made me uncomfortable and was a constant source of insecurity.  I understand that this should have been a code red alert for me that we were incompatible (and immature) and that I had fear of “not being good enough”, but unfortunately this experience tinted how I feel about possible future relationships.

Where do you draw the line?  I hear about people in mutually fulfilling healthy relationships, such as my mother and her husband, where the partners still talk about other people as being “attractive” and that bothers and worries me due to my own experience with my ex.  Is it something I need to sanity check?  Is it normal that even in healthy relationships people are still going off being attracted to others?  Normally, due to my experience with a Mr Unavailable, I would have chalked that up to being dissatisfied with your own relationship/partner, but this seems to be something most of my close friends do and normalise.

The other thing I hear a lot about from friends in relationships (though not necessarily healthy ones) is this idea of “crushes”.  Similarly, this idea about having a crush on someone while in a relationship seems to go into emotional affair territory for me, even if it is superficial.  I think it makes me uncomfortable because I find it sort of juvenile really and the people who talk about it are people who tend to be more illusions-driven types.

I understand there is a healthy difference between thinking someone is handsome and then straight out emotional affairs or being actively attracted to another person while in a relationship.  To me, however, just the word “attraction” implies an active process, not to mention a “single” mentality.  I’m beginning to wonder if this is something that is a personal boundary of mine (emotional and physical monogamy) or if it’s just an insecurity I need to work on and sanity check?

You’re mixing up a number of issues and using generalisations and judgements that chime with your own narrative to justify your position and reinforce an underlying insecurity and wall that you have about relationships. Let’s take it from the top:

Emotional cheating is an inappropriate emotional liaison with another person, so think of it is an affair sans sex. Often regarded as being worse than if a partner had actually had sex, emotional affairs involve secrecy, lies, and thinking about, talking with, and confiding in another person in a way that isn’t happening within the existing relationship–it’s betrayal.

I’ll tell you what emotional cheating isn’t: acknowledging that a person of the opposite or same sex is attractive.

While a sexual fetish isn’t a crime (depending on what it is of course), objectifying people, whether it’s in front of a partner or not, and being sexually inappropriate in behaviour or language, is a problem. One ex had poor sexual boundaries and was described by my friends as “deviant”–he constantly talked about other women, he made invitations dressed as wisecracks to my friends about threesomes, and degraded me with his behaviour to name but a few. When he came to visit me in the U.S. (this is after spending weeks emailing me about all the “young fillies” that were apparently eyeing him up in a club back home in Dublin), we joined a group of my friends for dinner on the first night and he said to my best pal, “I’m like a fire engine ready to spray you with my hose!”. I ended it with him shortly after, although I internalised his behaviour for quite some time.

Sure, your ex was a tit, but the question you have to ask yourself is: Why, if I am someone who is already insecure and not feeling “good enough”, am I going out with someone who blows my wound wide open with his disrespectful attitude towards me and women?

By having a very honest conversation with you, you get to acknowledge that because your beliefs centre around you being “not good enough”, having to compete with other women, and on some level also believing that you’re supposed to find someone out there whose eyes only work for you, you’re now in a self-fulfilling prophecy. This results in attempting to get somebody who behaves in ways that exacerbate your insecurity to validate you and forsake all others while at the same time, because you’re blaming you for his crappy behaviour, comparing you to other women, and telling you that if you were “enough” he wouldn’t so much as look at another woman, ultimately reinforcing your belief that you are not good enough.

Noting attractiveness doesn’t diminish the love or attraction you feel for a partner. No one is “going off”–it doesn’t mean that they want to have sex, run off, or start an emotional affair. Tarring your mother and stepfather with the same brush as your shady ex is an unfair comparison and judgement. It’s as if you’ve stopped believing in relationships with love, care, trust and respect. Don’t reduce them all to what you experienced.

You then have your friends who you say are not in healthy relationships who are having crushes, which by extension of them not having left the unhealthy relationships, explains their mentality. Crushes are only an emotional affair in the context of the person already being in a relationship and it being destructive to their sense of self or how they show up in the relationship. A crush is a form of escape; an infatuation that covers up an unmet need or unresolved issue in the existing relationship. A crush is ‘safe’ because we get to feel good from the fantasising without having to make good on it. Obsessing about the person can also be a big distraction from having to take action on more pressing situations.

It strikes me that aside from having gone through what was undoubtedly a painful experience with your ex, that you’re also carrying pain from the past that’s distorting your self-image and being used as a means of judging you as inadequate. Your darker feelings and thoughts about you are in some ways being projected onto people and into situations around you. Rather than holding up your hand to being self-critical and addressing the root causes behind that, it is easier to look at and even judge others because these people are evidence for the case against changing. You are already enough but until you decide that, it doesn’t matter what anyone else says. Why do you want to be ‘right’ about being inferior?

You being insecure; you believing that you’re “not good enough” is a you problem not an ex-problem. That is about your perception of you–you need to look at the beliefs you had going into this relationship as well as the beliefs you’ve exited with. These are judgements that are being used to protect you from experiencing an old pain again and from having to put you out there again–you’re criticising you and others as a way of avoiding a bigger imagined future pain.

Even if you found a guy who only ever interacts with men, that will not change the internal conversation that you’re having with you. You will feel temporarily in control but the fear will still remain which means you will find new ways to reinforce old beliefs. As a result, your so-called boundary is actually a wall because you’re unable to distinguish between different situations and trust you.

If you weren’t distrusting your viability, your value, your presence as a woman, you would not be so consumed by your insecurity.

No one can tell you what your comfort levels are but common sense dictates that if you have strong beliefs about the objectification of women and what you are and are not cool with sexually, that you don’t go out with somebody who has entirely different sexual values. That is your boundary to uphold. Do not concern you with what other people are doing; concern yourself with living up to your own standards in a relationship and that includes not objectifying you or other women.

Mend your relationship with you. Address whatever is behind your criticism of your body and your femininity.

Particularly for women, it’s vital that we recognise that it is not our job to take a man (or woman for that matter) with a boatload of problems or entirely different sexual values, and make him/her forsake all others so that we can feel worthy. If this is the intent we set out with where we are competing with other women for a ‘tiny pot’, not only does our scarcity mindset blow smoke up people’s bottoms but it ensures that any relationship we’re in is dead in the water before it can go anywhere.

All of our relationships regardless of how they work out, are here to teach us something. Your ex has knocked your confidence with his behaviour and you have crushed your spirit by judging you as lacking. This relationship activated an old wound. Take the time to see a therapist where you can look at what’s behind your pain so that you can let go by gaining perspective and forgiving your younger self for who you think that she’s failed to be.

Each Wednesday, I help a reader to solve a dilemma. To submit a question, please email natalie AT baggagereclaim.com with ‘Advice Wednesday’ in the subject line. If you would prefer your question to be featured on the podcast, drop a line to podcast AT baggagereclaim.com. Keep questions below 200 words. If you want detailed one-to-one support, please use my consultation service.