Moving On From Disappointment: Are you focused on the person, or on the bigger picture of your life? 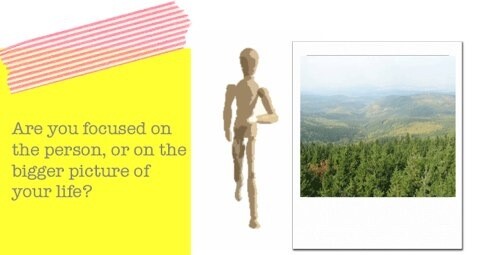 When you struggle to let go of someone, there can be sustained periods of rumination and in essence, stewing in what you feel is a rejection of you. If there’s been a series of disappointments, you’ve likely lost sight of you and your values, which means you don’t have the perspective that’s so needed to handle and manage the inevitable disappointments that arise in life.

Whether it’s for a date that didn’t happen, dates that didn’t progress, feelings that weren’t reciprocated, your relationship not working out, or even discovering that someone isn’t what you thought they were, you become fixated on this person (or even a series of people that you thought were “it”) fulfilling your hopes and dreams.

By focusing on the person instead of on the bigger picture of your hopes and expectations, you lose hope because the disappointment leaves you feeling like there’s no point in bothering and your ‘last chance saloon’ has gone.

When you struggle to get over the disappointment, it’s because you were over-invested in the potential, ‘vision’, and ultimately the hopes, plans, and outcome that you had set your mind and heart on.

If you’ve been invested in various people and the hopes and expectations you had for a relationship have to adjust due to practical factors, the disappointment is natural and to be expected, but you have to work your way through these feelings to acceptance so that you can create new hopes and expectations.

To continue to immerse yourself in disappointment like a vocation, raking over your past and ruminating on all of the things you ‘coulda, woulda, shoulda done if only’, creates self-rejection and ultimately regret, because as time passes and your outlook and what you’re doing hasn’t changed, that’s what you’ll come to regret – not the various things you’ve been through that brought you to this juncture but the stubbornness you used to lash yourself with and stop you from moving forward.

The disappointment, regret, and rejection is tied up in the idea that what you hope and want in your life is gone and over.

What do you want? This is where your focus should be – on the bigger picture of your values so that you can focus your actions on living congruently with them, not on a person outside of your control. Your purpose in life isn’t to have someone rescue you and make your life ‘better’ – if it doesn’t work out, it’s like returning to the life you didn’t want.

Wherever there’s disappointment and a sense of feeling rejected, you can be assured that there are illusions, giving you an inaccurate, if not downright distorted view of reality. It’s letting go of these that give you the much needed perspective…and freedom.

What are you stuck on? List them all, don’t hold back. What is it about this disappointment that you keep returning to?

You wouldn’t be disappointed if what you claim things ‘should’ be was real…because you’d be living it.

Walk your way through the relationship and work out where you got the illusions from.

Where did it start?

Did they say or do something? Did you?

What specific thoughts have you had that led you to this idea?

The things that you believed them to be, why did you believe it? Was it based on evidence? Was it brief? Was it based on ideas that you carried into the relationship that may be based on someone else they remind you of or unhealthy/unrealistic beliefs? List examples and the longer you were together, the more you should see of this.

What is the cause of the actual disappointment?

So for example, when someone doesn’t follow through with a date, is it because:

You’re disappointed because you misjudged them?

They seemed so nice and you were looking forward to it?

You hoped that this might be ‘it’ and you could be ‘done’ with dating?

You’re disappointed because you assume that you must have said or done something to put them off?

You compromised yourself and it still didn’t pay off?

You banked on this being the one that would make all of the previous heartache worthwhile and right the wrongs of the past?

For a relationship, it might be that you’re shouldering all of the blame for it not working out, so yeah, you’re bound to be disappointed, just unnecessarily so.

Taking a bigger picture view, this person cannot meet your expectations. They haven’t – it’s why you’re disappointed. They haven’t – that’s about them, not you. Don’t make everything about you – it will compound your hurt.

The facts say that they cannot meet your expectations – it’s holding onto the illusions that they can or could have if only X/Y/Z had happened, which normally boils down to, if you had changed, if you hadn’t breathed or put a foot wrong, if you had got them to change, or if you lived in a fantasy world, that’s disappointing you.

Let me say it again – it’s holding onto the illusions that they can or could have fulfilled your hopes and expectations and that your projected future could, would and should have happened, that’s disappointing you. The tighter you hold on, the more you revisit it – it’s like experiencing the disappointment over and over and over again. It gets even worse if you continue to lie to yourself about them while in the meantime, they behave like a jackass in the present completely contradicting you anyway.

Disappointment and rejection paves the way to new and ultimately better opportunities…if you don’t spend months or even years avoiding admitting a mistake or accepting that it’s over. The length and depth of the avoidance is what causes a ‘setback’.

You can release and grow if you make the connection between relationship insanity – carrying the same baggage, beliefs, and behaviours while choosing same type, different person (or variations of your type), and then expecting a different result – and disappointment.

Relationships serve to teach us about ourselves – the same lessons will keep coming back at you like Michael Myers in Halloween until you heed and learn from them.

Persisting in relationship insanity, means you’ll continue to be disappointed.

Even if you do the whole long shot mentality thing and go with the safe option of unavailable relationships so you can avoid ‘rejection rejection’, you will be disappointed even though it’s ‘expected’.

Your life and your repetitive choices are telling you that you need to adapt your thinking and your habits in order to start fulfilling your hopes and expectations for your life.

Lessen disappointment by living in line with your values so that you can be authentic. You will compound the disappointment if you deviate from them due to the attachment to the idea of this particular person being the ‘key’ to your life – you figure it’ll be worth the risk and then feel embarrassed or even ashamed when it’s not.

If you stay on a Bullshit Diet, it also means that you don’t hear what you want to hear, see what you want to see, and create meaning where there is none. You’ll communicate your expectations, thoughts and concerns – some people don’t do this for fear of disappointment. Then they get disappointed anyway and wish they’d spoken up….

Don’t try to be a perfectionist or the exception to the rule of shady behaviour – these create unrealistic goals while giving you a realistic but unwanted outcome; pain.

Like conflict, fear, and rejection, disappointment is unavoidable but you don’t have to let it claim you and you certainly shouldn’t use it to make judgements about yourself that leave you with eroded self-esteem. Let the disappointment go – forgive you and be kind to you because aside from nurturing you, it means you won’t disappoint you by not being on your side.

Your thoughts?
Check out my book and ebook Mr Unavailable and the Fallback Girl in my bookshop.

Understanding what makes you angry & why in relationships & post breakup part one
Mixing Up Optimism, Fear, and Denial in your Relationships - Just DO something
Giving 100 Percent Effort All The Time is a Boundary and Bandwidth Issue