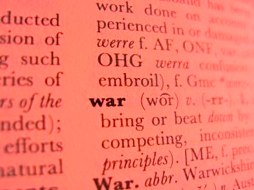 When you’re in struggling relationships, especially with emotionally unavailable men (Mr Unavailables) and assclowns, something your are likely to experience is passive aggression.

“Passive-aggressive behavior refers to passive, sometimes obstructionist resistance to following through with expectations in interpersonal or occupational situations. It can manifest itself as learned helplessness, procrastination, stubbornness, resentment, sullenness, or deliberate/repeated failure to accomplish requested tasks for which one is (often explicitly) responsible. It is a defense mechanism, and (more often than not) only partly conscious. For example, suppose someone does not wish to attend a party. A passive-aggressive response in that situation might involve taking so long to get ready that the party is nearly over by the time they arrive.”

Now I receive quite a few emails that describe the guy as passive aggressive but actually, in struggling relationships that drag on, this is behaviour that both parties can be guilty of, but for part 1 of this post, I am looking at his behaviour.

Here is a common situation where he exhibits passive aggressive behaviour:

Many men in these situations actions contradict their words. The women who engage in relationships with them have intense discussions about the relationship, telling them what they want/think/and pretty much everything but the kitchen sink. He will say and act like he ‘gets’ what you’re saying so that the discussion can end and promises things that he will not deliver on and insists that he is different to what you claim. He then ends up doing exactly as he pleases, which is normally the opposite of what you want and gets his own way.

But of course there very common examples:

Withdrawing by blowing lukewarm or cold when he thinks that you may need, want, or expect things from him that are actually often based on (false) promises and behaviour during the hot phase.

Cheating or multiple dating to avoid commitment to any one person.

Disappearing so that you don’t become dependent on him because he likes attention, ego stoking, sex but doesn’t want you to depend on him because it feels overwhelming and it’s not what he wants.

Being non committal by struggling to commit to doing something in a few days never mind in a few months. This is forcing you to stop expecting and asking.

Running rings around you in discussions with you so that you end up doubting yourself or even feeling guilty.

Getting angry with you and then playing nicey-nice to disarm you and bring the situation and you under his control.

Because he makes promises that he can’t keep when you confront him about his poor behaviour, he actually traps you in the web of the relationship which is actually based on lies, smokescreens and essentially poor foundations because by blowing hot and retreating, you get trapped in the hope that this time he will change, when in actual fact he’ll be blowing cold all too soon.

Behaving like a complete assclown and knowing deep down that he is in the hope that you will respect yourself, opt out and reject his behaviour.

How do you end up sticking around a passive aggressive?

By avoiding responsibility for creating your own happiness and putting the responsibility of the relationship succeeding or failing into his own hands. This is another one of those ‘buying time’ scenarios because men that exhibit such poor relationship behaviour yet we stick with them anyway, are a sign that we are avoiding. We’re avoid true conflict because we don’t confront things about ourselves or make ourselves responsible for changing the situation and opting out.

These situations arise from seeking out and being with men that are inherently incapable of meeting your needs hence creating the self-fulfilling prophecy and letting you off the hook.

That’s right – Choosing a man that caters to all of your fears and negative beliefs about yourself, men, and relationships because we choose men that reflect the things we believe.

You’re used to not getting your need met and being with passive aggressive men like Mr Unavailables and assclowns means you to get to throw your version of love at men that don’t appreciate it. You then feel disappointed, unappreciated, resentful, frustrated, or even downright angry.

These men take the p*ss by blowing hot and cold and playing havoc with your mind and life and you just end up indulging in self-doubt and blame because his poor behaviour feels like your failure. It’s all incredibly destructive.

But that in itself is part of our own issues with passive aggression and partly control. But that’s for part 2.

What I do know is that passive aggressive behaviour is about dodging responsibility, avoiding being direct, and poor communication.

You have to ask yourself if you’re looking for things from a man incapable of giving them to you. If your relationship is just one long trail of disappointment, resistance, conflict, and basically negativity, you’ve done what you can do and you need to opt out and make yourself responsible for your own happiness rather than trying to make a silk purse out of a pigs ear.

‘But doesn’t this just mean he’s f*cked up and needs my help?’ you may ask. There has to be mighty big foundation to commit yourself to ‘fixing’ someone and the reality is that if you have the desire to ‘fix’ someone, there are things about you that you are avoiding ‘fixing’. My suggestion is always go away, sort your head out, get happy, deal with demons, and then see if you still want this guy when you’re in a different mindset.

Love Lessons: When You Can’t or Won’t Ask Questions of the Man You're Dating/in a Relationship With ...
Podcast Ep. 239: Conflict Spotlights The Truth of Our More Fragile Relationships
48 Ideas For Increasing Emotional Availability & Breaking Harmful Relationship Patterns
Share this...