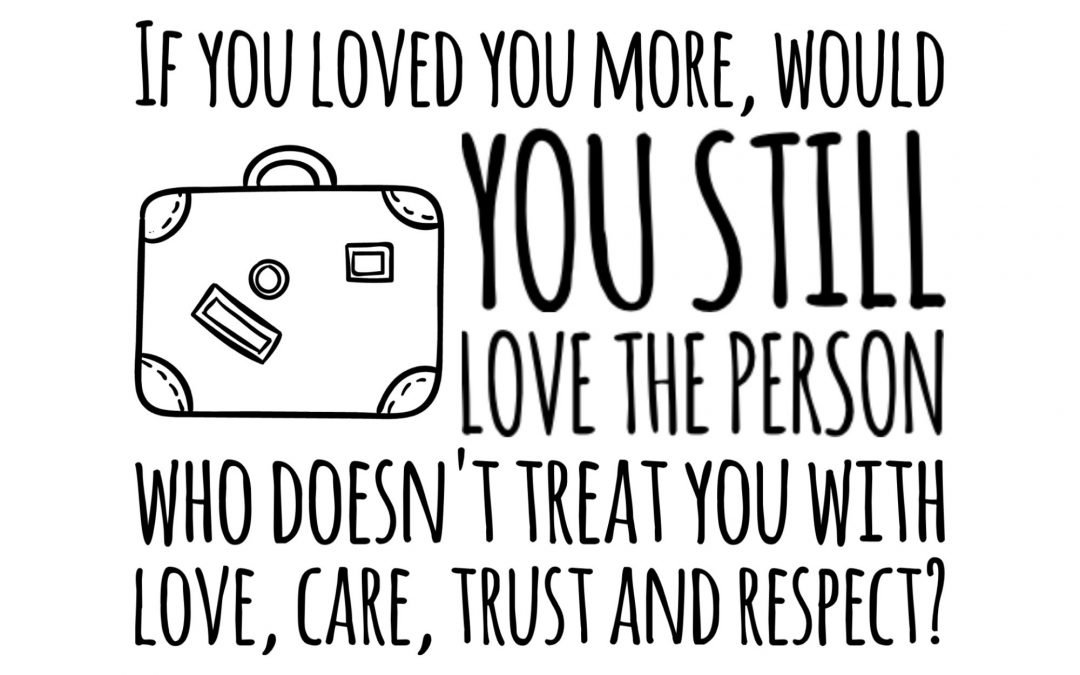 It’s so hard when I witness someone who keeps throwing themselves in the front line of pain by repeatedly returning to a toxic relationship or not leaving it. It’s not just because I’ve done it myself and it felt like a gradual exorcism of the past I’d veered between burying and blaming me for; it’s because of what it means when you’re in this situation:

That you just don’t love or like yourself that much.

Everything is riding on this person and it’s a vicious cycle of, “Yes, treat me this badly because I’m worthless and deserve it [because of everything I believed about myself even before you came along]”, and “No, treat me better. Change for me so that I stop being in pain from what you’re doing to me and from what I’m doing to myself by being with you. You can’t just up and leave and be with someone else after everything I’ve sacrificed and after everything you’ve put me through”, and so the pain continues.

The thing is, this just isn’t what a relationship or love for that matter, is all about. Pain, sure, but definitely not love. 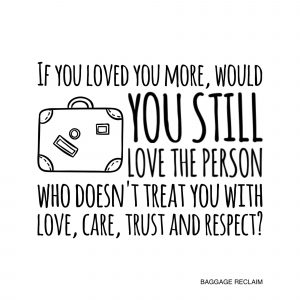 You need to part ways.

It is painful, horrific actually in some ways, and downright ‘inconvenient’ when you consider everything you’ve done, everything you’ve suffered through, and the ‘dream’ you have for this person, this relationship, and you, but you need to part ways.

It doesn’t matter who does it but please, whoever does, grab the exit. No, you don’t know what’s in front of you (us humans never do anyway) but better to be experiencing the clean pain of grieving the loss and recalibrating so that you heal and become more of who you are, than the ‘dirty’ pain of remaining in the toxic relationship.

You each represent something to the other that neither of you can really be around. It reflects what remains unresolved from your pasts.

The mistake is assuming that what someone is doing to you is because of you (something about you or something you said or did), and while there’s no doubt that not liking and loving you and the consequences of that (lack of boundaries) provides a fertile ground for this type of relationship, it’s not the cause of the effect (their behaviour and the totality of the relationship).

Sure, you have little or no boundaries but even if you had The Best Boundaries Ever TM, they would be who they are, just not with you.

Love doesn’t make you less of who you are or cause you to languish in deep pain while you massacre yourself on the relationship. Old unresolved wounds, deep pain, long-standing patterns–that’s what causes this.

Blaming you for other people’s behaviour is a trap because you act from a place of believing that you could have done something to prevent what they’re doing. You’re just not that powerful–I hope that if you were, that you’d use your powers for wiping out poverty, war and disease. And you know what? You can’t change their pattern and their past.

Two people who are throwing their own unconsciousness at each other and dancing through a painful pattern.

Sure, it can feel ‘special’ to decide that they’re only like this with you or that they’ve been worst with you, but they didn’t just fall out of the sky into 2016 and get ‘provoked’ into being ‘like this’ for you.

They’re just a stand-in for who you weren’t originally able to get whatever it is that you’re looking for.

They don’t like and love themselves either, even if they carry on as if they’re the centre of the universe. They’re that way because they don’t like and love themselves and it’s their carefully constructed, habitual framework of thinking and behaviour that’s helped them to cope (but isn’t healthy). At some point they’ve vowed that they will ‘never something’ again and you’re bearing the brunt of that.

Every time you tell this person that you love them, that you want them, that you miss them, that you’re sorry for what they’ve done, and that you’ll do anything to be with them/have them back, you’re actually reinforcing all of the underlying reasons for their own self-dislike and self-hatred. 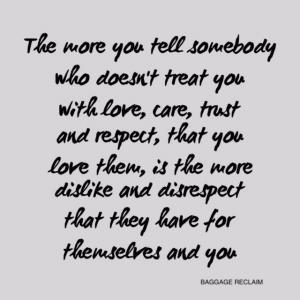 You’re giving them a Get Out of Jail Free Card for avoiding responsibility, again.

The relationship has to end sooner rather than later, because by doing so, you’re forced to confront the pain that’s driven you to this person and to this relationship. You take responsibility for you instead of blaming you ‘for them’ and then trying to get them to make you feel better about it.

It’s also because they have their own journey to make. Depending on their backstory, they might, through the pattern of their relationships ending, be forced into confronting their pain and addressing their issues. It’s possible that they’ll experience very difficult and painful consequences that curtail them.

But there are also some people who walk amongst us who don’t know how to love and in fact cannot love because they don’t have empathy.

Their ‘task’ in life is forcing people who don’t like and love themselves, who over-empathise and who ‘over-feel’, to like, love, empathise and feel for themselves.

They teach people who think it’s their ‘job’ to make people love them and who have personalised what parents, caregivers and others have done or failed to do earlier in life, that it is not about them and to take responsibility for themselves so that they can live their lives with empathy, compassion, tolerance, love, care, trust, respect, and integrity.

Without these experiences, as painful as they are, you would be bumbling around blind to the pain, untrue stories, and habits that are holding you back not just from being who you truly are, but also from being in a mutually fulfilling loving relationship.

You would continue the pattern and keep wondering what’s wrong with you.

If being with someone has forced you to confront every ugly thought and feeling that you’ve been stuffing you and persecuting you with, as painful as it is, be thankful that it’s out. You are in the process of liberating you.

Lovenomics: Managing Your Desire to Be the Exception in Relationships Part One
Why There's No Point In Being With Somebody Who Blows Hot & Cold
The under-receiving over-giver: Are you able to receive gifts, compliments or help?