Why Am I Experiencing Resistance About The Thing I Say I Want or Need? 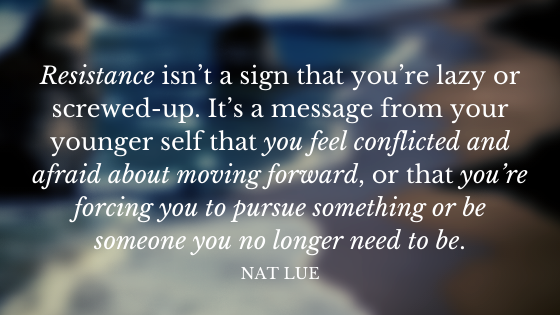 Sometimes, we go to do something that we thought we needed or wanted to, and then resistance shows up in the form of confusing inertia, paralysis, anxiety, procrastination, discomfort, struggle and the like. We then appear to be going in the opposite direction or frozen on the spot, casting doubt over our needs and desires, or on our abilities.

Resistance also surfaces when a belief or an idea contradicts our tried and tested (even if it’s hampering us) pattern of thinking and behaviour. We, for example, repeatedly tell ourselves something even though it might not be true. “I’m not good enough” or “I can’t X”. “It’s my fault that X happened or that Y felt/behaved like that”. New actions and thinking, then, call the old belief into question or allow us to become more than what we’ve allowed or deemed us to be. These might terrify us.

Each person’s resistance manifests for its own set of reasons and in its own particular way, but discomfort is its calling card.

Despite any noise/motions we make about what we want or need, resistance left unchecked impedes or halts our efforts. If we don’t understand why it shows up for us, a vicious cycle ensues because we haven’t confronted what lies beneath: fear.

We’ll wonder ”Why am I experiencing resistance”? and likely make one of the following mistakes:

2) Read our resistance as confirmation that we should do a U-turn.

3) Fear that the security of our perceived identity (even if distorted) is under threat.

Now, sure, on occasion, resistance might be down to laziness. It’s amazing, though, how many people-pleasers, perfectionists and overthinkers who are on the verge of burnout and who are also high-performing, overgiving and fixing/healing/helping Energizer Bunnies blame their resistance on being “lazy”.

It’s altogether very possible that the reason we’re experiencing resistance isn’t so much because we’re “lazy” or on the wrong path, or effed-up for that matter, but because how we’re going about things (thoughts, actions, attitude) means that we’re in it for the wrong reasons. Or, we’re being a perfectionist, pleaser and/or overthinker and effectively putting us on the chopping block. Sometimes we’re doing both.

Resistance is code for “I am afraid”.

If you always try to do things in an A+ fashion, you’re going to feel exhausted and resistant in advance. This will be the case even for things you want to do!

New things will freak you out, or the novelty will wear off once you go into perfectionist mode.

Wouldn’t you feel resistant if you knew that you were about to suck the fun or learning out of something?

When you experience resistance after deciding to date again, isn’t it possible that some of it’s due to fear of being hurt again (and imagining horrific consequences)? Or fearing/knowing that you’re slipping into a pattern that doesn’t work?

On some level, you know that whatever you’ve previously tried to ‘get’ (e.g. validation, fill a void, avoid), obstructed you from being available for healthy relationships. You won’t call it “resistance”; you might say that there’s no good men/women left to date.

If you’re afraid of stepping out of your comfort zone and you learn about something that will, for example, help you to grow professionally, resistance will emerge not because it’s the wrong thing, for example, to promote your work but because you feel icky about being visible and experiencing rejection. Of course, you won’t call it “resistance”; you might say that you’re a creative person that just wants to focus on creating.

If you’ve, for example, spent your whole life thinking that you couldn’t do something because of an old painful experience, or believing a generalisation about a group of people, someone saying or living otherwise feels threatening. You’d have to let go of the old story, allow you to grow up, or admit that you were off base. Yep, these are all things that most humans resist even when their freedom is on the other side!

This means that resistance is a clue that we’re either:

It’s also critical to note that aspects of our resistance are learned responses to old pain, fear and guilt. Procrastinating so that we don’t become too successful or happy might be something we adopted in childhood to protect ourselves. Yes, it helped us to survive, but continuing with it in adulthood stops us from thriving because we’re not that kid anymore. This is where you can ask yourself What’s the baggage behind it?

If you’re in perfectionist, pleaser or overthinking mode, resistance is a cue to dial it down.

If you’re experiencing resistance around dating, sure, it might be a sign that you’re tired. It could, however, be the wake-up call that you need to approach it from a more mindful place.

If you’re resistant to doing something that will advance you professionally or grow your business, it means that this is an area where you need to stretch yourself. Note that there are many ways, not just what a seeming “expert” states. Your resistance is a notification that you’re hiding out.

Resistance, especially when it involves sticking to what you know isn’t good and right for you, is a sign that you’re hiding from your potential, purpose, or moving on to the next stage or taking the next step. Experiences will keep coming along to push you out of any persistent resistance. It’s always a message to be more you by letting you evolve. Paying attention will let you find your way back to you.

Stop Minimising You (You have needs too!)
Saying NO doesn't mean that you're screwing someone over
Don't scratch the loneliness 'itch' with the wrong scratcher
Share this...