Is It Time For You To Opt Out of The Disappointment Cycle? 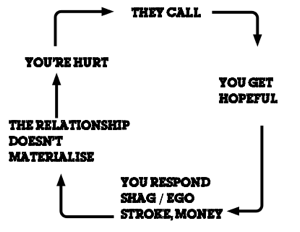 Sometimes you can find yourself ‘trapped’ in this cycle of doing the same thing over and over again on the basis that in spite of evidence to the contrary, you still believe there to be the possibility of the original reward or ‘big payout’. There are a number of people I correspond with who it doesn’t seem to matter how many times they are disappointed by the same person, when that person gets in touch, they respond and do all manner of things. Then they feel disappointed and vow to do differently but yet the next time the person does the same thing (or variations of it), they will respond in a similar way.

Now if you’re looking at these as isolated situations, you might think that they were different, but in reality, in this example, one time the person called and asked for something and one time they didn’t ask for anything ‘upfront’ although there is an ‘understanding’, the other party sprung into hopeful action thinking that they would get the ‘big payout’, it didn’t happen (again) and they felt bad afterwards (again). 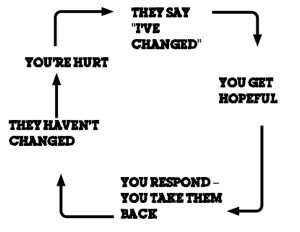 What’s catching you out in these situations is being hopeful for the ‘big payout’, i.e. the relationship you want or whatever, but being side-tracked by the short-term or even instant high. Sometimes you get sidetracked by your ego. At some point you need to be saying “Er, this ‘reward’ doesn’t exist / it’s not worth it.” At some point you need to opt out of the The Disappointment Cycle that you’re in with the same person. If you stop viewing the situation in the same way that you have previously, you will recognise the pattern of disappointment and learn from the insights gained – you certainly wouldn’t continue responding because that would be insanity – doing the same thing and expecting different results.

If you look at how long you feel good for when the latest cycle first starts and then evaluate how long this lasts for in minutes, hours, days, and weeks, you’d be surprised how you can be putting yourself on the hamster wheel for what may be a matter of minutes. One reader has been doing a ‘cycle’ with her ex for several years for feel good highs of as little as fifteen minutes!

I’ve asked a few people why they keep doing this to themselves and all answers led back to this anticipation of something that’s not actually there but they hope for it to be there because it would make it ‘all’ worthwhile.

When they think about responding differently, they don’t think about not responding at all or saying NO – their idea of not responding is to make them wait a while or to not make it ‘easy’ for them. But what is the point if at the end of the day, it’s going to wind up at the same net result at the end of the cycle? You could add in another few steps, but a person who is hellbent on doing things ‘their way’ will passive aggressively and sometimes aggressively get things to where they want them to be.

If you keep winding up with the same net result from someone, it’s teaching you who they are and their real agenda. Even inconsistent people end up being consistent about being inconsistent with the net feedback to you being Don’t rely on this person.

It’s like when you only hear from that person when they want something. It’s all very well hoping that on the 51st occasion they’ll be different but you have 50 occasions where they haven’t been. They’re a user.

If you look back over an unhealthy relationship, you will see that there’s a ‘cycle’. The time periods may vary a little but you will notice that certain things happen or they do something, you respond, they do something else, you respond, there’s a fallout, and lather, rinse, repeat. I know people whose relationships break down every Christmas and just in time for Valentine’s day. I know of people who ruin every birthday, weekend away and holiday. I know of people who hear from an ex every time they’re in between a relationship. What do you do with these people? Keep hoping each Christmas, Valentine’s etc will be different? Keep being available in between their breakups?

People really do teach you what to expect from them – you could expect differently but that will only set you up for pain especially when they’ve been giving you all the information you need to choose a different course of action. Without them. Listen to your feedback from your experiences and recognise where you’re being sucked into responding to their cues.

They’re just not that different. If you broke down each occasion and plotted it against a calendar as well as did a blow by blow list of moves, you’d be frightened at how damn similar the situations are and each of your responses.

If someone is blowing hot and cold, then you know that when you get hot, cold is coming and vice versa and lather, rinse, repeat. You don’t try to get them to do hot all the time – you recognise that playing switcheroo is their thing and get off the rollercoaster (disappointment cycle) before you throw up your self-esteem or continue to give them time and energy that would be better spent elsewhere.

Unhooking Yourself From the Picture of Your Relationship
Reader Question: Is control more important for Mr Unavailable than being with you?
Does my ex Mr Unavailable or assclown miss me?
Share this...