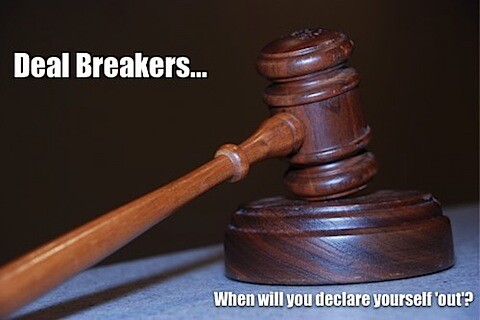 Over the past few years, I’ve written many times about the importance of boundaries, the personal electric fence that will all need that sets limits not only for others and how they treat you, but also for ourselves with what we’ll put up with. I work hard to push the message home because particularly with women and speaking from personal experience, we don’t always live and love with our self-esteem in tow, which then causes our confidence to be dented further as well as eroding our perceived value and not having us believing that we’re worthwhile.

Recently while talking with a number of women, i became somewhat fascinated by what they all perceived to be ‘deal breakers’, which is really about a characteristic or behaviour that has you declaring that it’s time fold and opt out. Why so fascinating?

Some people don’t have deal breakers. They could literally be treated every which way and somehow they’d find their way back to the relationship boardroom trying to hold together the ‘deal’ somehow.

Some people do have deal breakers…they’re just ‘odd’. They’d get blinded by chemistry and overlook some of the worst behaviour, but if they weren’t feeling wild passion, drama, unavailability etc, then their deal breakers are popping up all over the gaff. All of a sudden they’re too ‘nice’, there’s no chemistry, they don’t have enough of the same interests, eat their dinner funny, or whatever.

Some people do have deal breakers that mean that even when they’re happy in a good relationship, they’d kill it off for something they could stand to sanity check. Why would you kill off a mutually fulfilling relationship where you say you’re the happiest you’ve ever been but they’re not as good looking as you’d like them to be or they earn less money?

Some people do have deal breakers – they’re the code amber and red behaviours, signs of disinterest, and they basically know their boundaries – for them it’s a deal breaker from the moment that someone isn’t acting with love, care, trust, and respect towards them or causes them to act without self-love, self-care, self-trust, and self-respect.

If you’ve put up with multiple acts of disrespect from one person, you don’t know what your deal breaker is. You’re the type that says “I know I’ll leave when it gets really bad” but has no idea what really bad is. You want it to be 100% bad even though you’ve lost sight of what that is, and 50% bad spells trouble as it is.

We all need deal breakers – a ‘deal’ (read: relationship) without boundaries (read: terms) is a bad deal that will run and run, with you going into emotional bankruptcy.

We all come with inherent small print that basically advises other parties of the terms of use – it’s like the unspoken code between humans. Most of us assume we each have that small print and recognise that if we overstep the mark and don’t seek to meaningfully rectify, not only will the personal electric fence be buzzing like crazy, but we’ll be reminded of the small print, and/or the deal might be off.

My personal deal breaker is that if I have to go against myself, make it my vocation to show and say over and again what my boundaries are, and teach and raise adults from the ground up, it’s time to step. I’m not pretending for anyone, I’m on a Bullshit Diet and keeping myself firmly out of denial and if me being around or loving someone means that I can’t love myself etc, I’ll choose me every time. I’ll be damned before I’ll jump through hoops and cartwheel over hot coals trying to force my value upon anyone.

Any person that expects you to devalue yourself in the process of your involvement with them isn’t worth having around. This means you have to take protective measures, distance yourself, opt out, and/or cut off. Doing all of these things are acts of self-esteem.

The problem in many relationships is that we deny, rationalise, and minimise and as a result, we overlook a lot of things. Those who get into and stay in bad relationships have a great capacity to excuse and rationalise inappropriate behaviour – how deep they’ll get depends on how far their ‘compassion’ and ‘denial’ meters extend.

Deal breakers are those things you cannot overlook, but if you keep overlooking and overlooking, it makes it very difficult to see the wood for the trees. I don’t believe in ‘overlooking’ because there’s a fine line between that and denial. To overlook is to basically ignore and disregard.

Relationships don’t require you to ‘overlook’ a load of things like ‘Hey, I know you’re this, that, and the other, but because the chemistry is so great I’ll just pretend those things don’t exist’.

Relationships do however, require acceptance. That’s basically agreeing to accept reality so that you can make educated decisions about your relationship but also ensure that you don’t live in denial.

If you overlook things you inadvertently accept the behaviour – you approve it.

Many people get caught out by chemistry, common interests, Fast Forwarding, Future Faking, great sex and all sorts of things because even when you have reason to feel cautious, in these situations you decide that whatever you think you have outweighs any concerns.

The other pitfall is assuming that because you think you have chemistry, they look how you want, they share your interests, great in bed etc that this correlates to the rest of them and that they’re automatically in possession of shared values and other qualities and characteristics that you’d like.

So what’s the answer? Don’t overlook anything. That doesn’t mean you’re flushing people out left right and centre, but either date with your eyes and ears open instead of being blinded by chemistry, lust, and big illusions, or don’t date at all – that’s commitment, to you. It also means that your relationships have a spirit of acceptance which respects both you and them.

Dating is a discovery phase that requires you to do due diligence in the process of enjoying yourself with a view to working out if there is a capacity for growing this into a committed relationship. When you overlook in the dating stage and still wind up in a relationship, it’s like agreeing to subscribe to something without reading all the details, checking out what you’re getting, and addressing any concerns.

I declared years ago that it was a deal breaker for me to go out with someone that loves Sci-fi especially the likes of Star Trek, cricket, and is basically very partial to sports – this is the boyf. Don’t know where I was going to find a man with a penchant for sewing at weekends, Sex and the City reruns, exploring vintage shops and more… We have a great time with our diverse and in some cases shared interests nonetheless.

It’s up to you to decide what you can’t overlook, but I do suggest that if you can’t overlook stuff like appearance, common interests, money etc but you do manage to overlook what can often amount to open and shut cases of assclownary, you could stand to do some rejigging of your priorities.
Your thoughts?

How to end up being the Other Woman
Future Faking Is Like The Emperor's New Clothes
Stop Giving To Men That Don't Deserve or Want It
Share this...