If You’re Being What You Think Is a ‘Good’ Girlfriend/Boyfriend, Are You Actually Being You? 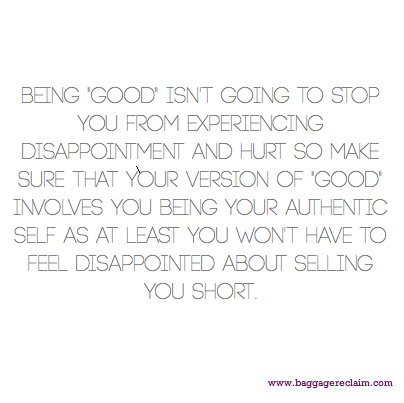 When people are explaining their relationship issues to me or how they’re struggling with a breakup, I often hear something along the lines of, “I tried so hard to be a good girlfriend/boyfriend” or even “I did everything that someone could want from a good girlfriend/boyfriend” and it immediately alerts me to someone who was very much devoted to pleasing the other party, likely at the expense of themselves. It also reminds me of when I tell my daughters that they can’t do/have something and they go, “But I’ve been a good girl mummy!” and I’m thinking “Er, that’s got nothing to do with my answer!”

Many of us have been raised with this idea that being “good” is super-important. In fact, many of us have been raised with the idea (or certainly interpreted it as such) that if we are good, people will treat us well, hence ipso facto the assumption is that if we’re not treated well then we must have been “bad”. This sticks with us from our childhoods and even when we become adults, we forget to mature our perceptions or adjust our behaviours.

Of course when we’ve busted ourselves up with people pleasing to the point where we couldn’t be distinguished in a line-up of doormats, being disappointed, not being treated well can seem rather unfair. I know that sometimes when things don’t go my way, I can almost a see a three-year old version of me in a red coat stomping my right foot in a huff and wanting to flounce off, possibly not before I’ve given them as much of a reproachful stare as I can muster.

The trouble with our obsession with being “good” is that we all have different interpretations of what that means and if the readers of this site are anything to go by, here are just some examples of what it can mean.

Being agreeable to the point where you don’t have any strong opinions on anything and you silence your own feedback and criticism.

Being over-empathetic so you end up putting you in the other party’s shoes and then imaging what you would do, projecting it onto them and then being too compassionate while being blinded to their behaviour.

Suppressing your needs, expectations and desires to prioritise those of others, while somehow expecting these very things to be met even though you don’t assert yourself.

I think that we mistake gaining approval with being good when actually, being a good person is really about having moral purpose and living your life in line with your values.

If you treat you and others with care, trust, and respect, and where appropriate love, other aspects of being ‘good’ such as being kind (but not a doormat), compassionate (but not over-empathetic), giving (but not a mug), honest (but with respect), conscientious (but not making everything about you and seeing you as an extension of everyone else) and essentially being a person of integrity do happen as a natural extension especially when you live consciously as opposed to in Lala Land.

When you focus on being a “good girlfriend/boyfriend”, you can end up playing a role and this may actually sidetrack you from being you because you end up becoming very concerned with presenting a person who will be ‘kept on’.

It can actually get to the point where you’re essentially tip-toeing around trying not to be, say, or do anything that might give them an opinion on you that could ‘sway’ them away from ‘choosing you’.

If and when things become difficult or it doesn’t work out, you end up thinking “But I’ve played by the rules / I’ve been a good girlfriend/boyfriend / I’ve given them everything so why the hell am I alone / heartbroken / unhappy / being ditched for someone who isn’t doing what I am?”

It feels really unfair especially if you’ve acted so ‘fairly’ that you didn’t really have a voice or fair representation in the relationship because you were so concerned with holding onto him/her. It’s a difficult and one of the ways this plays itself out is that after worrying about being “good” in the relationship, you worry about how you look out of it and next thing you know, you’re basically breaking them off a piece or force feeding yourself a faux friendship because you want to be “fair” and not look “mean”.

There’s no perfect answer to this whole “I’m good but bad things happen” issue. What I do know is that being “good” should be representative of your values and should happen organically as a natural extension of being you. Anything else is contrived and will sell you short. It may even come across as disingenuous if people start to think that they’re not seeing the real you and that you’re trading passivity for getting them to do what you want.

Being “good” isn’t going to stop you from experiencing disappointment and hurt.

Life doesn’t work in this organised fashion of bad things and disappointment only happening to “bad” people, otherwise we wouldn’t need prisons and laws. Being ‘good’ doesn’t mean that you have the power to change people whose characters and values don’t fit in with you, so it’s best just to be who you are and act accordingly because trying to get people to change or blaming you for Other People’s Behaviour as if your worth influences and even provokes it leads to unnecessary pain.

Relationships are joint ventures that need to be copiloted.

You go through the discovery phase of dating and hopefully go on to forge a mutual relationship where you’re both in it and you’re both putting in your authentic selves, as opposed to one of you putting on a performance day after day or showing them around you like the equivalent of an estate agent / realtor trying to offload a property.

It’s very easy, especially with online dating being so prevalent, for us to end up being focused on cultivating personas that we think will be attractive to someone. We try to have boxes to tick. We try to be boxes to tick and somewhere along the way we forget that we’re people who have lives, interests, hobbies, passions, goals and dreams.

You can be you and be a relationship partner. They’re not mutually exclusive and if being in a relationship is separating you from your identity or causing you to act like a performing seal, you’re trying too hard.

Do you have a Replacement Mentality?
Holding on to the illusion: Are you emotionally lazy?
Can Men & Women Just Be Friends?