Drip-Feeding: When you get the truth (or lies) in installments 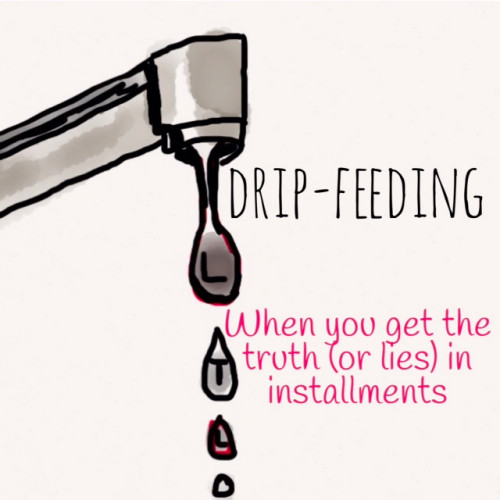 When someone feeds us the truth about something one bit at a time, possibly because we keep catching them out, what they’re doing is drip-feeding information on a ‘need to know’ or more like, ‘I just got caught out’ basis. I’d say that they’re drip-feeding the truth, and in some instances that may be the case, but sometimes a person can end up drip-feeding more lies, and it ends up being like a lies version of the film Inception – a lie within another lie within another lie.

If you’re being drip-fed the truth, consider it a code red alert that something is seriously wrong and you most definitely shouldn’t proceed until you’re absolutely certain of the facts and the trust issue has been addressed and resolved. Obviously this can pose an issue because while people make mistakes and do lie (and regret it and seek to make amends), drip-feeding is just a continuation of a lie, only this time, you’re being led to believe that you’re both on a truth level when you’re not.  That person is unwilling to be upfront and is feeding you information on a need-to-know-basis and re-deceiving you time and again. It’s very difficult to feel comfortable in an atmosphere of lies and half-truths. It’s destabilising, especially when you keep taking each ‘installment’ at face value, only to discover that there’s more to come.

You start out believing that you’ve been told the truth. Let’s call it 100%. Then you receive a ‘drip’, possibly because you’ve caught them out in something. This automatically means that your 100% or whatever percentage of truth that you believed that you had at the start, was not that amount – it was less.

At that point, you may be tempted to roll their arse out of here, but it’s very possible that depending on how healthy the relationship was before or how healthy your own self-esteem and self-trust is, that you’re willing to continue, albeit that things are strained for some time.

For a start, telling you a lie, telling you that they’re now telling you the truth, and then having to revisit that lie, hurts far more than if they’d just been upfront. Being hurt, angry, sad, frustrated and a myriad of emotions, are all natural responses to discovering that you’ve been lied to. They may not realise that they’re trying to control your feelings and reactions by holding back.

If it’s about you being angry, aside from the fact that you have a right to go through that emotion (remember that anger and rage are two very different things), it’s a catch twenty-two situation because they will have this drip-feeding habit because they reason that it’s the best way to ‘manage’ people’s responses and their own culpability – passive aggression. When you do get angry, particularly as you’ve been deceived again, they’re simmering away and going, Ha, see, this is why I don’t tell the truth because look at how he/she reacts! In the meantime, you may unconsciously roll back your reactions in an effort to make it ‘safe’ for them to be truthful and so end up ignoring your ow n feelings including any misgivings about the situation.

If it’s on relevance, if what they withheld is relevant and even puts the original version of events in a different light, it begs the question of, How did they determine relevance?

Whatever you do, don’t ever blame you for the fact that somebody is lying to you. That’s on them. Own your own and let others own theirs and when you do this, you will not deceive you into being and doing things that assume that you have the power to influence and control other people’s feelings and behaviour. One of the things I’ve learned the hard way is that when a person wants to tell you the truth because it’s who they are, they’ll tell you the truth not keep drip, drip, dripping away. People can and do make mistakes but once you know a second or even third drip exists, do not proceed

When we ask someone to tell us the truth about something, unless we have existing reasons to distrust them, we take their answer as the truth; we place our faith in that person that we’re getting all of the truth and are no longer being deceived in any way. If we have misgivings, we might seek clarity on certain points, which is to be expected. It’s too much for a person who has lied to us, to expect us to automatically accept that what we’re now getting, is the truth, the whole truth and nothing but the truth. In some instances though, a person may insist and in fact be adamant that they’re being truthful and possibly make such a kerfuffle about winning us over or moving past things, that we quickly accept that we are in possession of the truth, that is until at some point down the line when we are made aware that the truth is in fact a lie.

Whatever you’re getting in installments, whether it’s the truth or just lies upon lies, it’s just not conducive to a mutually respectful, loving, caring, trustworthy relationship, romantic or otherwise. It’s also bloody exhausting!

Being truthful with somebody isn’t something that we can just decide to take out an installment plan option and what a person forgets when they’re drip-feeding, is that it’s unfair and actually quite manipulative to hold a person by deception. Sure, sometimes the truth hurts and potentially leads to consequences but it doesn’t mean that we’re any less entitled to the truth plus, we can get on with recovering and moving forward when we have the truth, whereas the pain of lies and deception not only hurts deeply, often affecting our sense of self due to us often doubting ourselves and inadvertently crossing our own boundaries, but drip-feeding costs the person in question their integrity, something that they’d still have, if they ostepped up and did the mature thing and were upfront with the truth instead of trying to avoid or even outright escape natural consequences.

Remember, if you’re getting what you’re taking to be the truth in installments, that person’s also lying by installment and this means in the ‘Debit and Credit Trust System’, experience is actually teaching you that your trust account with this person is in the red and no further extensions should be granted.

Take responsibility for evolving your boundaries, not for other people's behaviour
After The Breakup: Hold Tight To Your Self-Respect and Stop Trying To Be Friends With The Ex That Mi...
Discussion Dodgers: When you try to raise an issue and the person finds fault with your timing or ap...