Getting Real About Recognising Inappropriate Relationship Behaviour: He Doesn’t Need To Cheat (or Beat) To Be An Assclown 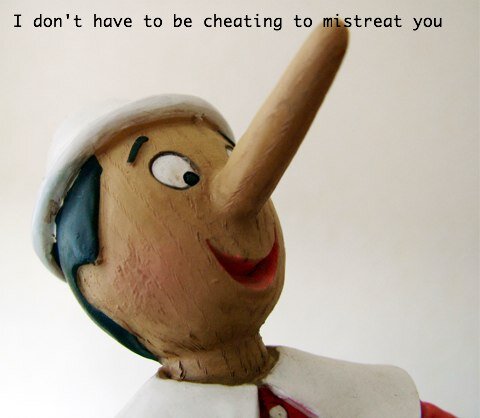 In my last post I wrote about the key behaviours that assclowns rely on to mistreat you and manage the relationship on their terms including passive aggression, erasing the past by pressing The Reset Button, and deciding that ‘I’m not that bad’ because they have other ideas of what they constitute as ‘bad’ so they feel within their rights to invalidate your perception of their behaviour.

I think the most common misconception I come across is that people seem to think that for their guy to be an assclown, they need to be cheating.

While this is an example of assclown behaviour, you can be involved with a faithful assclown but that doesn’t change the fact that their behaviour is completely inappropriate.

When you use the likes of cheating or even beating as a barometer of what constitutes inappropriate relationship behaviour, not only do you fail to see the wood for the trees, but you’re actually setting yourself up to take a hell of a lot of poor behaviour in a sort of ‘waiting for it to get really bad’ mentality instead of recognising that it actually already is really bad. It’s like ‘I know I’ll leave if he cheats on/beats me because then I’ll know I’m in a really bad relationship, even though you’re already in your own personal hell. It’s a warped glass is half full optimism.

Just because someone hasn’t shagged behind your back or left visible bruises on you, doesn’t mean that you’re not being bruised, battered, or even broken by their behaviour.

It’s really good to assess what your beliefs are about love, relationships, and yourself because when you use cheating (or beating) as your marker is tied to ideas that stem from the belief that a faithful man, even if he’s of jackass proportions, is better than no man, or not as bad someone who does cheat (or beat). In fact, I have even come across women who think that a guy that thumps them around but is faithful is ‘not as bad as he could be’.

‘I believe that most men cheat’ is a belief where if you believe that your man isn’t cheating, things can’t be that bad.

‘I believe men cheat when something is wrong with the relationship or me’ is a belief that will have you also believing that things aren’t as bad as they are because if they were, he’d be sleeping with someone else.

It may be because you’ve witnessed it with your parents or in previous relationships and homed in on these behaviours and believe that they’re key things to look out for they are, but they are not the only dubious actions to look for.

Do not perpetuate the misconceptions in society and in particular, often held by these people, that communicates that poor relationship behaviour only comes in certain guises, otherwise you will find yourself in dangerous and damaging situations that bust your boundaries and are not a reflection of healthy values that you may possess.

Remember it can be very convenient and comfortable for someone to stay in the relationship and enjoy the fringe benefits like a shag, an ego stroke, a shoulder to lean on, money, status, a convenient smoke screen that detracts from the ‘real’ them and more. I’ve come across a lot of women involved with faithful guys who are ‘faithful’ as in they stick around, but they are totally withdrawn, use and abuse them, and wheel them out like show ponies to remind themselves that they’re not the man they see when they look at themselves in the mirror. That doesn’t mean that it’s a relationship to value and hold on to – you want someone who is faithful and treats you with love, care, trust, and respect. If these are absent, you’ve got no relationship whether they’re there or not.

I’ve come across many a woman through this blog who has dined off the ‘good points’ and the ‘good times’ – how else do you explain how they can wax lyrical about, for example, 10% of the entire relationship while 90% of it is awful?!

I don’t doubt that most people have their ‘good points’ and ‘good times’ but it’s what on balance, the good points look like when the not so good and downright outrageous bad points are taken into account. If you’ve ever, for instance, been involved with a narcissist, you’ll know that when the going is good it’s great, but you’re only a hop, skip, and a jump away from the bad times, and they’re very, very bad.

People who have to talk about ‘good points’ and ‘good times’ work off the premise that these are evidence that things could be like this all or most of the time, when in actual fact, they’re not. A person is the sum of their entire characteristics and qualities, not just the convenient bits that suit your vision of them and the relationship. They may consistently be someone who exhibits their bad points.

Do you know that serial killers can often be charming, help out the little old lady next door and have glimmers of kindness? While it’s an extreme example, my point is that at a stretch we can find something decent to say about most people, but it doesn’t mean that they’re great relationship material or a great person that you share values with.

In my next post: Is he an assclown because he broke up with me or doesn’t want a relationship?

Also check out how to spot emotionally unavailable men

Exercising Your Right To Say NO & Having Boundaries Isn't Immature
Advice Wednesday: I Took Him Back & Now He's Cheating Again
The Replacement Mentality: But WHY did they go back to their toxic ex when they could have had me?