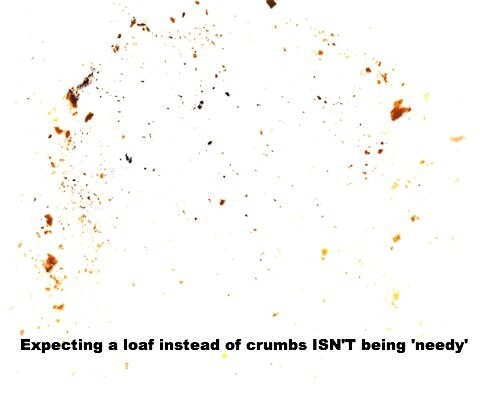 One of the words that gets bandied around and misused a lot in dating and relationships is ‘needy’.

“The reason why my relationships haven’t worked out is because I must be needy.”

“I scare people off because I think I’m too needy.”

“I would have been a better person in the relationship or we would have had a better one if you hadn’t been so needy.”

Some people will believe they’re being needy for having basic needs or just any needs because they may have been raised to believe that theirs don’t matter or that other people’s needs are more important.

Some people will believe you’re needy for having expectations for mutual love, care, trust, and respect. They have relationships on their terms hence anything above and beyond that is ‘too much’.

Some people make their partners the centre of the universe and make them their sole focus placing all their needs at their door – codependency.

But that’s not where ‘neediness’ starts and stops – if you expect a relationship, to have your needs met, decency, mutual love, care, trust and respect from someone who via their actions and even their words has demonstrated that it’s not on their agenda, then you can appear ‘needy’ even if you have the most basic of needs even though you may not actually be needy in the wider sense.

This then becomes like expecting water from an empty well – quite frankly a cardboard cut out looking for a bit of Sellotape from someone who doesn’t want to give anything is going to look ‘needy’.

If you’ve ever been involved with someone who is emotionally, physically and spiritually unavailable that’s unable to provide the landmarks of a healthy relationship – commitment, intimacy, progression, balance, and consistency – you’re involved because it’s reflective of your unrealistic and/or negative beliefs about relationships, love, and yourself, which place you in limited and conflicted relationships.

By placing your confidence in someone like this, if you gain love and a committed relationship against the odds and they make you the exception to their rule of behaviour, it’s a convoluted way of getting some confidence and validation.

If you’re entirely honest, in recognising the ‘synergy’ between you (both unavailable), you’re giving and expecting from them because you’re looking for reciprocation and you think it should be easier to get your needs met. You may even start out trying to expect as little as possible to ‘win’ them which means that when you expect even a little more and meet with conflict, you’ll feel needy.

Let’s be real – if you start out expecting shag all and then expect them to stump up even 10%, that’s a ten fold increase for the person that’s all about the me.

I’ve said it many times – everything in relationships is contextual.

If you have unrealistic expectations of what someone and a relationship should do for you, it will mean that you’re emotionally demanding and co-dependent.

You’ll be the type that becomes a human Transformer to become what you think they need so you can be ‘loved’, plus you may expect them to want to be with you all the time, or you may play Florence Nightingale and take on their problems, be a Buffer in a Transitional Relationship trying to heal them from a previous relationship, or for example, try to get them to meet needs that a parent should have originally fulfilled, something that many people try to do. This type of behaviour doesn’t work in any relationship.

If you have basic needs of mutual love, care, trust, and respect in your relationships, this isn’t needy.

If you have those same needs in a relationship with someone who has shown themselves not to be capable of meeting them no matter what they say, it doesn’t make you ‘needy’ but you are wasting your time and trying to change them.

If you have unrealistic expectations from partners and expect them to make you feel things about you that you can’t even feel for yourself, you’re going to run into problems no matter the type of relationship and yes, it is ‘needy’.

I find that many women in particular are afraid of having boundaries, self-respect, and of having a basic requirement for mutual love, care, trust, and respect and as a result, they work off this fear that if they don’t yield and bend to the other party, they won’t have their needs met, so they abandon themselves and then end up on a diet of crumbs not getting their needs met anyway and being hungry.

Hunger is hunger. Now while having a healthy sense of self means that by improving your self-esteem, you don’t go around ‘starving’ looking for people to feed you scraps and instead go around with a comfortable relationship ‘stomach’, if you’re feeling hungry in a relationship because you can’t even get a care, respect, or trust ‘biscuit’, it’s because you’re in an unhealthy relationship and you haven’t left and are still expecting.

The only way that you can be sure of making sure that you aren’t ‘needy’ is by having enough self-esteem that you are actually meeting some of your needs (that means feeding yourself) so that you don’t look for things from the wrong people or try to get what you can’t even do for yourself.
I don’t like the word ‘needy’ because it’s too often used by people to invalidate other people’s feelings and make it sound like respect and being expected to chip in emotionally and with actions is something dirty, unrealistic, and the domain of people with delusions of grandeur.

All too often we experience the hallmarks of a relationship such as sex, being with someone over a period of time, plans etc and we think it’s OK to expect but if you are not in a mutual relationship, it’s an inequitable partnership – someone is getting things on their terms.

All too often I see that people are only too happy to get a shag, ego stroke, and a shoulder to lean on and we think they value these things enough to ‘give back’ what we need, but instead find that we value these things very differently.

If you’re meeting someone else’s needs and it’s not in an environment of mutual love, care trust, and respect, you need to fold. If you don’t start out mutual but hope to turn this ship around, you will end up running aground and depleting yourself because the ‘tipping point’ is never reached.

Shags, ego strokes, and a shoulder to lean on are the easy things to give and take but they are not an automatic precursor to the meat and two veg of relationships – commitment, intimacy, progression, balance, and consistency along with mutual love, care, trust, and respect and shared values.

You’re entitled to have needs but if you don’t ever want to find yourself using the word ‘needy’ or being called ‘needy’, don’t expect from those who are not in a position to provide and get on board with you so that you don’t relegate or second guess your needs and end up selling yourself short.

Ultimately most people cannot live on a diet of crumbs so there’s nothing wrong with expecting a loaf instead of having gnawing hunger all the time, but don’t give other people the power to be responsible for your entire sustenance.

Obsessing & Overthinking - Processing the Evidence of your Relationship So You Can Move On
Dodging People's Projections: It's Not About Us. Really.
Excerpt: How To Lose An Assclown in 90 Days: Offloading The Fairy Tale Of Turning a Cockroach into a...