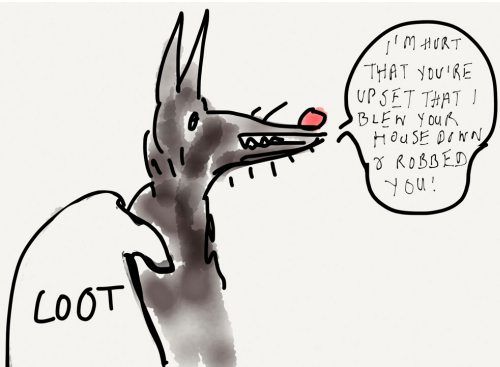 Sometimes we can find ourselves in situations where we feel compelled to say something about what someone has said or done, possibly because it’s aimed specifically at us or because we’re part of a group of people who are affected by it.

Most of us have some level of discomfort with conflict, especially when we have to raise concerns, assert boundaries, try to respect our own feelings and at the same time are afraid of upsetting the other party. I hear from so many people who remain desperately uncomfortable due to trying to leave other people comfortable with what can be at times shady behaviour. We can be so bad that somebody could be robbing us right before our eyes and we’d think, Jaysus, I can’t raise the alarm and ask them what the feck they’re doing because I don’t want to make them feel uncomfortable about being a thief.

There are millions of people tormented at this very moment due to feeling bad about having called someone out on something that they’ve said or done. Now granted, it’s never easy to relay concerns or even criticism and we have to be conscientious about the way in which we do things in order to be as respectful as possible, but there’s a big difference between representing ourselves with respect and being rude.

The natural consequence of saying or doing something that crosses the line is that on occasion, we will be called out on it. We might not be called out on it each and every time, especially if we’re doing it to the same people / person as the likelihood is that they won’t want to feel like they’re riding our arses like Zorro or that they’re parenting a naughty grown up, but we will be called out on it. Er… how else are we supposed to know our own boundaries and those of others? Yes it’s not easy to say or hear this stuff but it’s not easy to remain silent and continue to put up with something that’s really bothering us.

It’s not disrespectful to raise an issue with someone although there are people who will accuse you of this and so in turn, make themselves a ‘victim’ and ultimately distract from the real issue. I’ve seen adults throw tantrums or sulk and skulk until people back off. Even my 4-year old who will pull a Grace Jones and cut her eyes, stare us down and sulk is having to learn that it doesn’t mean that I’m going to cave and backtrack.

When a reader told me that she was afraid to go into work due to having upset a coworker who had then taken to creating a hostile atmosphere, I was curious as to what she’d done. Brace yourself – this man was brushing his teeth at the communal kitchen sink and spitting and gargling all over the gaff with cups and all sorts in there with it! Jaysus! In typical fashion, despite other coworkers griping, a collective silence on the issue ensued until sick of remaining silent, she took him aside to a meeting room and asked him if he could brush his teeth in, you know, the bathroom instead.

Now look, I get it that he will probably have felt a touch (or a lot) embarrassed but not only did he tell her that she was rude for mentioning it, but he also denied that it was an issue and proceeded to gripe about her to her coworkers. He didn’t recognise her concerns – if he’d empathised and considered how someone might feel about him hacking into the sink (yeuch) instead of taking on a sense of entitlement, he would have considered how uncomfortable it was for her to have to even bring it up in the first place.

Some people go into combat mode when they’re in C-situations (conflict and criticism). They’ve become quite skilled at shutting these down by being aggressive and/or passive aggressive. They might also choose to suddenly unleash a list of complaints and criticisms that you were entirely unaware of and even contradict previous sentiments expressed, in ‘tit for tat’ style.

The more successful they are at going on the attack when called out on their behaviour is the less that they learn, and from our perspective, the more that we fear flexing our C-situation muscles and responding, is the more that we get how we truly think, feel and act squished into a very uncomfortable role of being a people pleaser.

It’s easy to see why many a communal zone has terse, caps filled notes stuck around the place –  I get regular belly laughs out of the site Passive Aggressive Notes. Or after collective silence has gone on for too long or a person just gets tired of their own silence on something, there’s an eruption. Remember that episode of Friends when Ross goes ballistic over his boss eating his turkey sandwich?

Over the years, I’ve learned a few things that help me to deal with these tricky situations.

Stick to the facts of what was said or done. Avoid making assertions about their character – it means they have little ammunition. You may find that you have to repeat the facts a few times if they keep trying to change the subject. Sometimes a person doesn’t recognise how over the line they are until it’s spelt out.

If you can avoid it, don’t go in there all guns blazing or geared up for a showdown as it will gee you up and get their backs up.

Don’t mix the two of you up. They have to take care of their feelings and you have to take care of yours. You can empathise and use that to consider how to broach the topic but don’t project or forget the actual issue or say nothing at all. My acupuncturist gave me this great mantra that’s brilliant for mentally bouncing back baggage that doesn’t belong to me. “That’s not mine, that’s yours. Take it back.” It also works really well when you keep playing back something that someone has said or done to p*ss you off. Also, if you keep in mind that some people don’t react well to conflict and criticism, you will not make it personal. It’s not about you.

Try to stay calm. Not cold calmness but just do your best to stay steady because the type of person whose going to try and turn it around will only feed off of your upset and attempt to up the ante. Breathing (a lot of us hold our breath when tense) and stepping back a bit helps with keeping your emotional and physical space. If you stay calm and they just get louder or more aggressive, step away. Remaining calm helps you to listen and to step back from mixing up your respective feelings or perspectives, especially because you’ve been sticking to the facts.

The reader with the sink incident took him aside again and told him that she had felt that she could go directly to him but that she could always take it up with HR if he preferred it that way. He started using the bathroom and she was OK with him not liking her because at least she liked herself.

People who react badly in these situations sometimes apologise when they’ve cooled down so don’t allow how they react at that moment in time or even in the aftermath to become your outlook on all types of C-situation.

Only some people behave like this but it’s not worth being a people pleaser all of the time just to appease the people who scare you or to be ready for the prospect of conflict and criticism some of the time.

In the end we have the choice between the short-term discomfort caused by speaking up versus the medium to longer term discomfort of saying nothing and hoping that we’ll nice them into a change of behaviour. Not.Gonna.Happen. Also remember that people are going to think what they’re going to think and do what they’re going to do regardless of how much you try to control that with people pleasing behaviour, so don’t lose your voice.

If you feel bad after you 'help', it probably wasn't 'helping' (Why it's good to stay out of Other P...
Podcast Ep.23: Name-Calling In Arguments?, Why I Find Affirmations Beneficial (& You Can Too!)
When You Experience Conflict In Your Friendships Because Of New Boundaries
Share this...