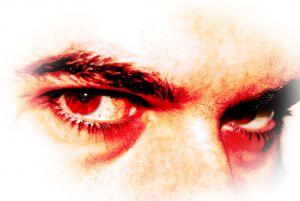 On Day Ten of the 30 Days of Drama Reduction series, Cheekie ponders whether going down the blame route is really the best option….

So…about this here ‘drama’ thing we create for ourselves.

I see a lot of comments, blogs, stories etc., about how it is the man’s fault. He’s an ass, he never calls, he treats me like crap, he ignores me – the lists are endless.

But really, to play devil’s advocate for one itty bitty second, how is it their fault if we get upset by our self induced drama? Half the time they don’t even know they have upset us.

Now, before you start swearing and cursing at me, yes, I definitely believe there are (and have dated, unfortunately) some real Emotionally Effed Up and Completely Unavailable Men. But are they all considered that, just because you think it or because of a few rare examples? Or is it really because the relationship hasn’t met YOUR expectations?

Sometimes, well often, we allow ourselves to get so caught up in the drama that we believe we are the victim in this game of mistreatment they are supposedly winning.

I do think some women are genuinely mistreated by men. But, for this post’s purposes, I am not talking abuse of any sort, but rather the smaller issues and things that we tend to get so worked up over. And compared to abuse, emotional or physical, most of the stuff we women dramatize is small, small potatoes.

Therefore, is it fair to place blame and thereby victimize ourselves in this way?

We only place blame when we cannot deal with or we fear dealing with something.

Doesn’t the adage “People treat you the way you allow yourself to be treated” apply in this case?

When we blame men for the drama, and the BS in relationships, are we not relinquishing a bit of our own power? Are we not saying to the world that ‘Yes, I am willing to sit by this phone and wait forever for some guy who doesn’t want to be with me to call just to let me know that he knows I’m alive’.

Does that seem right to you?

(FYI, men by nature, avoid any and all relationship confrontation like the frickin plague. So, the more worked up you get, the more avoidance you will get, really, and I think they can smell it from 10 paces)

Shouldn’t we instead be looking at ourselves, and why we are choosing to let ourselves be treated like this? And yes, it is a choice. A hard, painful, tearfilled choice, but one we are consciously making every single time we start dating, and it goes badly (or not to expectation-another topic for another day) or it just plain isn’t working – for one person or the other.

And isn’t it further free choice to stay in said relationship, one that is causing you to feel this way, causing you to grow more and more fearful and angry and just plain indignant?

Which, in turn, causes us to blame an entire gender for our mistreatment.

You get bitten once by a Doberman, and pretty soon you find yourself wary of Dobermans.

Twice? Well you are downright terrified of Dobermans.

But that doesn’t mean you don’t love dogs.

(sorry, couldn’t help myself with the dog analogy there)

We are mistreating ourselves, ladies.

Lapping up our own drama, causing it, feeding and nurturing it.

So, let’s stop victimizing ourselves.

The more we blame others, the more fearful we become of them, and the more power we give up, which is a vicious cycle because guess what will happen with the next relationship if we keep it up?

Yup, you guessed it. Might as well buy stock in that highly overpriced gourmet ice cream with brownie bits and chocolate chip cookie dough (um, not that I know it or anything) because you have some long, tear filled nights ahead of you.

Cheekie is back as a regular contributor to Baggage Reclaim. She’s a 30-ish single cheekie chick, just wandering her way through the dating forest and trying to leave as many bread crumbs as possible….Look out for her posts each week!

Do you have a post or tip to submit for the series? Get in touch!

Catch up on posts in the 30 Days of Drama Reduction series.

If you are a Drama Seeker, you should be reading my ebook Mr Unavailable and the Fallback Girl. Find out more and buy and download.

Maintaining your position in and out of your relationships - Part Two
Guest Post: Emotionally Unavailable Men - Understanding the girl after you
Guest Post: Why YOU Are The Problem: The Repeater Boyfriend