Advice Wednesday: Why Is It Taking Months To Get Over Someone That I Wasn’t Even Into? 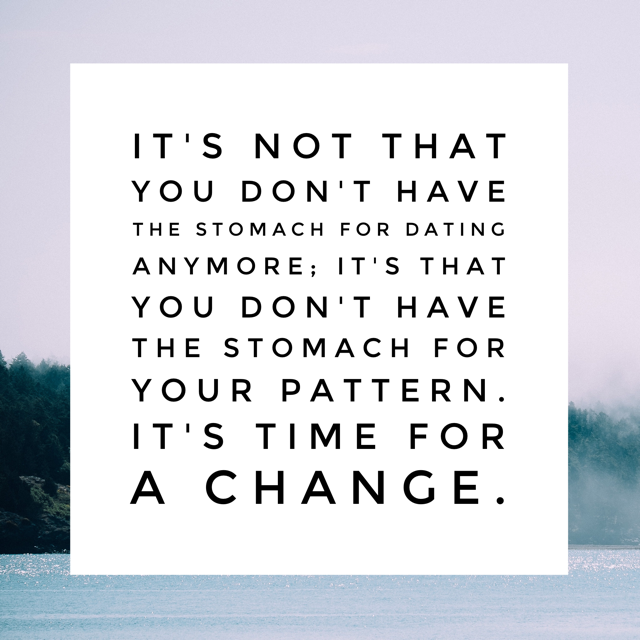 Esme asks: I’ve dated Mr Unavailables pretty much since my teens (I’m mid-thirties now) and while it’s definitely hurt when things haven’t worked out, I’ve always been able to get back into dating within a few weeks, even if we were together for more than a year. Well, at least that was the case until my most recent ex. I honestly don’t know why it’s taking me so long to move on—we weren’t together for very long (about 5 weeks) and I wasn’t as into him as my other exes and I definitely don’t want him back. Nothing has worked and just going on Tinder or contemplating the idea of being with someone again induces anxiety. I feel paralysed and as if I don’t have the stomach for dating anymore. I’ve cried more over this last few months than I have in all of my dating years combined and I don’t even know what I’m crying about. What is going on with me? Will I be able to date again?

I have a friend whose dad went out to his favourite restaurant and had the same meal he’d been having for years, only for him to find himself in an ambulance after having a severe reaction to shellfish. Ten years on and he hasn’t been able to eat shellfish again and he’s also become intolerant to another favourite of his, sweetcorn. Everyone’s tolerances are different and sometimes we hit our capacity for certain things and our bodies say no more.

Over the years, Esme, life has tried to give you hints of varying sizes about the men you’re dating. For a time, you were able to get away with dating emotionally unavailable men, probably able to compartmentalise your various involvements and distract yourself with attention from a new guy.

Jumping from one involvement to another and never really allowing your emotions to surface has caused you to get more than a little ‘backed up’ and imbalanced. Those emotions that you’ve suppressed and repressed didn’t disappear and die. They have all been stored away and avoiding feeling and systematically putting you through the cycle of unavailable relationships has taken its toll. You have maxed out. You have hit your inner capacity for Mr Unavailables and it’s resulted in an outpour of emotion.

I get the impression that you want this all to go away so that you can get back to ‘normal’. You say that you don’t know what you’re crying about and this means that you’ve either buried your feelings and thoughts on past experiences for so long that you’ve forgotten that you buried them, or you on some level know what this is about but are playing it down.

It may be that you have normalised the unavailable relationship experience so much that while on one hand you recognise that you always go out with Mr Unavailables, on the other hand you haven’t made the connection between your habit of doing so and how you feel about love, relationships and yourself. It’s as if you had almost accepted that Mr Unavailables were the status quo and you weren’t expecting to be with anything different. It might feel like ‘home’ because it’s familiar from childhood.

You don’t have the stomach for putting you through the spin cycle of being in relationships that are capped in terms of availability—they’re limited in intimacy, commitment, balance, progression and consistency (the landmarks of healthy relationships).

Imagine working long hours for years and years without taking proper time to rest. What do you think that life would do to force you to take time out? Probably make you so ill that you can’t do a damn thing and you’re forced to learn how to take care of your overworked body.

You’ve been so busy moving from one relationship to another that you haven’t stopped to pause and just be. Were you afraid that if you didn’t date and you instead spent time on your own or let your feelings surface, that it would be too confronting and that you couldn’t cope?

You are not alone in what you’re going through and it often is the person who you’re not that fussed about that becomes the straw that breaks the donkey’s back. You’d think it would be The One You Were Crazy About or The One You Didn’t Get Your Way With, but sometimes it’s the things without fanfare, the people who we have a much more subtle, quieter experience with, that make our past ring really loudly and force us to learn a lesson that we’ve been delaying on heeding.

If it had been one of the guys who you’d felt crazy about, you would probably have put your feelings down to being crazy about him and opted back into a cycle of pursuing your vision of the relationship or taken those feelings and tried to channel them into a new involvement. Instead, you know that you’re not into him and you know that you don’t want him back and yet there are all of these feelings there that you don’t have a name for or someone or something that you can hastily attach them to. It might also be that there is something about this last involvement that you haven’t been able to hide from, that was maybe more obvious to you because of the fact that you didn’t care as much for him as you did other partners. Maybe this involvement has shone a spotlight on something about your pattern that you would not have seen otherwise.

You’ve been forced to pause, to take stock, to try to let those feelings come so that you can step out of numbness or even what might have been edging into deadness. You’ve been in this cycle for the best part of twenty years–it had to stop at some point. Doing the lather, rinse, repeat of unavailable relationships puts you in an uncomfortable comfort zone where you’re limiting the amount of intimacy and vulnerability that you experience. It causes you to switch down your feelings in order to cope.

Crying is no bad thing. It’s a release. It’s grief. You’re grieving all of the previous losses and also grieving for your younger self who has settled for less. I know that it must be very painful for you right now but think of this as the clean pain of expressed feelings rather than the ‘dirty’ pain of repressed ones. Look at this guy who you didn’t want to be with as a very handy helper that’s awakened you to the realisation that you feel. Somewhere along the way you forgot this and have settled for crumbs. You have been through things that you’ve sought to escape via your involvements and you’ve also hidden feelings of low self-worth in your ability to move on quickly, which gave you a temporary boost. But this is no way to live.

Whatever you’re afraid of confronting is exactly what you need to confront.

You will date again but first you need to take time to heal. It doesn’t have to be a long time but listen to the needs of your body right now so that you can take care of you emotionally, mentally, physically and spiritually. If all you want to do is date, then sure, keep on doing what you were doing, but if you want to be part of a mutually fulfilling loving relationship, take some time out to heal now. Once you lean into this, you will find that these feelings move on remarkably quickly and you regain inner peace and a greater sense of self.

Acknowledging who and what it is that you’ve been seeking out and replicating through your unavailable relationships, will help you to close up the void and break the pattern. Therapy could be a good way of working with someone to help you process. I highly recommend engaging in self-care practices like journaling including keeping a feelings diary, Unsent Letters, learning to self-soothe and doing anything that helps to healthily boost your self-esteem.

And take it a day at a time and don’t try to avoid what you’re going through. The only way out is through.

Have you been in a similar situation to Esme? How have you dealt with unexpected grief from past relationships?

Becoming isolated in relationships - Part Three
How To Cope With Being The Other Woman
Reader Question: Why can't Mr Unavailables either let go of their ex or return to them?