Why can’t men and women break up? 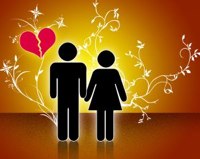 I admit; breaking up sucks and it’s a royal pain in the arse. Suddenly hopes and dreams that were pinned on the relationship have to get squashed and there is a whole load of white space where, in your mind, and sometimes in both, there were plans.

But breaking up is one of those sh*tty, horrible things that almost all of us have to go through unless we stick with the very first person that we get with.

Whilst they can be unpleasant, break ups do have to happen and yet, I’m starting to think that the modern world is full of people that don’t like to have an ending, so they just don’t.

Men that like to keep things ambiguous, just in case they decide that they might want her to break him off a piece of sex. Men also hate looking like bastards by uttering the words so instead they act like bastards so that women get the message.

Women who are so blinded by the idea of being with him or so entrenched in fear that the idea of letting go, even if he’s the biggest bastard on earth and she’s shed more tears than she cares to remember, she’ll still spend her life holding out hope.

It’s no wonder so many of us are feeling like our relationships are driving us cuckoo.

If it was down to the men that I have dated in my past, the great majority of them would still be in my life now, talking complete poo, and delivering …nothing.

The reason why I am broken up with these assclowns is because I cut the cord and got on with my life. Some were easier than others but it’s no different to repeatedly putting your hand in the fire – At some point, surely you have to realise that you’re having the crap burnt out of you and stop repeating the same behaviour?

That is of course unless you prefer the feeling of third degree burns on your hand to the uncertainty of unfamiliar territory.

Even though I’m only 30, I sense that there is something very different about breaking up in this century than in previous times. I think that modern dating has us in an options wide open mentality and with emotional unavailability and commitment issues so prevalent, both men and women can’t commit to breaking up, but can’t commit to a relationship either.

We’re commitment shy. Afraid of making the wrong decisions so making no decisions. We’re afraid of being in charge, responsible, accountable, and it’s a hell of a lot easier to blame it on a crap dating pool.

But to be fair to women, many are looking for answers and making genuine, concerted efforts to change.

But sometimes I wonder if we are over complicating things. Can’t we just break up like they did in ‘olden times’ before online dating, speed dating, booty calls, and f*ck buddies?

Can’t we just break up?

Your thoughts? Why can’t we break up?

If you can’t break, won’t break and want to understand your behaviour, check out my new ebook Mr Unavailable and the Fallback Girl. Find out more and download.

'Is He Different With Her? Why Did He Choose Her Instead of Me?' - When You’re Not The One (or they ...
Advice Wednesday: I Tried To Escape My Grief With An Affair--What Do I Do Now?
Refusing self-forgiveness is just another role you play that blocks happiness