Blindsided with a breakup: What to do when you can’t get answers 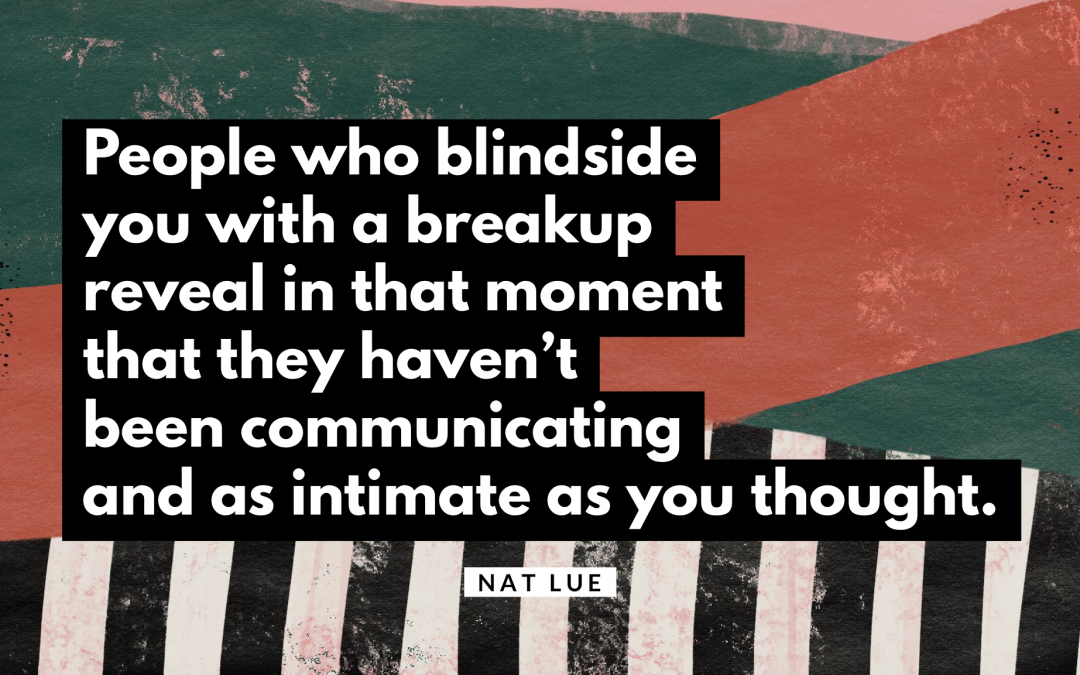 Have you been blindsided with a breakup? It’s difficult enough when you sense or know that the end is nigh for your relationship. Maybe the writing’s on the wall because of the way they are behaving. Perhaps it’s because you’ve both tried to work through issues unsuccessfully. The likelihood is that even with a decent level of self-esteem, you will go through a period of wrestling with what-ifs and, yes, possibly giving you a hard time.

But what do you do when your breakup appears to be out of the blue? How do you begin to process, heal and move forward when your partner blindsides you with a breakup?

When the ending of your relationship seems to come out of left field, it can be incredibly destabilising. It doesn’t make sense, especially when in the hours, days and weeks beforehand, they said and did things that were contrary to this ending. Like my friend who was dumped just weeks before her wedding. Just the week before, he was writing “I love you” in the condensation on the kitchen window and talking about how excited he was to marry her. My friend thought it was an out-of-the-blue breakup. Unfortunately, he forgot to mention that he’d already begun a new relationship.

Here’s what I know for sure about people who deal you a ‘blindsided breakup’: It’s not the case that they just woke up that day and decided to do it. Like everything was picture perfect up until that day or even week. No. They knew, on some level, possibly a lot of them, even if they won’t admit it, that they wanted to end it. You just weren’t in on the conversation.

When someone dumps you ‘out of the blue’, what you can immediately learn is that they didn’t and haven’t been communicating with you. You have not been a party to their inner world.

They don’t let the left hand know what the right hand is doing. They give the veneer of calm, happiness and a shared future while secretly wrestling with doubts, fears, anger and even grievances. If you were hit with a barrage of complaints where it was the first you were hearing of them, this is someone who’s carried silent rage in the relationship. Unbeknownst to you, they were keeping a tally of offences. Or, they marked your cards on something that you genuinely believed that they were okay about.

Maybe they kept telling you they were okay when they weren’t. Maybe it seemed like everything was perfect.

It’s possible that you had little niggles and inklings.

Unfortunately, when you’re blindsided with a breakup, it’s not uncommon for the person to stonewall all further communication. They disappear so that you can’t engage with them, or they refuse to let you speak. Or, they say they’ll talk with you and then keep cancelling. Some — and I know this might sound downright absurd — will later acknowledge that it was a crappy thing to do and even that some things they said weren’t true, but then say that there’s no point in further discussions or trying to resolve things because they did this.

Remember, it takes time to get to know someone. Sometimes we don’t know how little someone is communicating until they say or do something that allows us to look back and see things more clearly.

You might wonder whether you should keep trying to get them to talk. You can’t force someone to talk who doesn’t want to or is hellbent on clinging to their narrative. You’ll end up feeling as if you’re losing your dignity and chasing them down. Part of their stonewalling might be, on some level, about getting attention and feeling powerful.

The more you chase them for answers is the less you believe in your ability to grieve and mine what you know for your closure.

Yes, it will take time. No, no one deserves to be broken up with in this way. But they haven’t done it because of your worthiness. They’ve ended the relationship in this way because of their issues. Going about things in a different way would have involved looking at things more deeply than they want to. They think that they can move on free of problems, but what they’ve sought to avoid will just show up in a different way.

When you do move forward (and you will), don’t use this experience to punish you or future partners. Learn what you can from this relationship so that you raise your communication and intimacy levels and be with a partner who will meet you there.

Sex With the Ex
The Life Lessons: How relationships teach us more about ourselves
Stop Obsessing over How Men Communicate