If Only I Could’ve: Raking over what you think were your mistakes 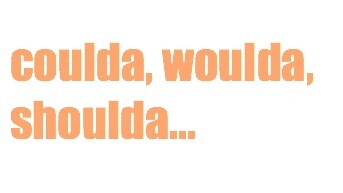 I used to spend more time thinking than doing, and the main area of thought expenditure was contemplating whether if I’d done A + B instead of A + Z whether I would have got C, the relationship that I wanted and envision I would’ve got…if only I’d done the ‘right’ things.

If you’ve been through this thought process of pondering the coulda,woulda, shoulda’s of your relationship, you’ll recognise how mentally consuming and self-defeating it is.

It’s raking over your relationship and obsessing about it so that you can look for reasons to not only blame yourself but identify ‘solutions’.

While some of the ‘errors’ that you believe you made probably weren’t the most productive or healthy thing for a relationship, some of the things that you view as errors aren’t – you perceive them as wrongdoings because you don’t know your own values and boundaries or what a healthy relationship looks like.

This activity keeps you invested in the person and the idea of the relationship that you think you’ve robbed yourself of.

You then become stuck in blame and shame and either not liking yourself for making mistakes, or doing things to try to ‘correct’ them that you may later come to regret and even view as embarrassing.

Aside from putting the responsibility of loving myself squarely with me, one of the things that freed me and allowed me to finally let go and accept relationships that had gone awry, was accepting a fundamental truth:

To take this further, sometimes, even when we recognise that actually, we weren’t the only person who made mistakes, we come up with this ‘radical’ notion that if we were to correct our mistakes, then they wouldn’t have erred either.

You then believe that if you change they’ll change – you’re forgetting that the only person you can control is you plus you’re hypothesising about something that has passed.

If you’re going to rake over your past mistakes, use them as a springboard to grow from, learn the lessons, and apply them to your present and your future.

The things that we tell ourselves are the mistakes often blind us to the truth. They’re the easy things to latch onto. Someone told me recently that her relationship ended because she wasn’t pretty enough, from the right family, and the new woman was more qualified at the same job. Of course she could try to change her looks, adopt a new family, and get more qualifications, but actually her relationship didn’t work out for other reasons.

When you run around believing that certain things you’ve said or done screwed up your relationship, you start to focus on the trees instead of the wood.

It’s not that it’s not important or valuable to understand what you can do to be a better person in a better relationship however, what you may be failing to realise is this:

There are always things you could have done differently but if your fantasy equation is based on the premise of a relationship that was flawed because you were incompatible, you had little or no boundaries, the relationship was borne out of deceit, it was full of code ambers and code red’s, the problem isn’t you trying to change some of the moves you made – the problem is the choice of person and misguidedly believing that the relationship you imagined is possible with them.

If the initial choice is unhealthy, you could literally put yourself through the machine of change and the relationship is still not going to work out.

When you acknowledge whether the choice in ‘co-pilot’ for your relationship was a healthy one (check out code amber’s and red’s), you can have your regret’s but you can also accept that it wasn’t all down to you why it didn’t work and that even if you had done all of these things, that it still wouldn’t have worked anyway.

If it was a healthy relationship, you both have your part to play in why it didn’t work out. It doesn’t all hinge on you.

You don’t have the power to make any relationship with anyone ‘right’. You do need to have good self-esteem, healthy love habits and apply them to appropriate people and relationships.

When we’re reluctant to accept or to get uncomfortable and make change, it’s easier to imagine fixing our mistakes in the old relationship. While sometimes this can work if you’re both fully aware of why it didn’t work out and both prepared to do the work, really the best place to apply the lessons learned is to now and to your next relationship. Until then you’re living in the past trying to turn back time and you’re another day away from loving you, acceptance, and getting on with enjoying your life in the present so you can enjoy your future.

Assessing the Threat Level: Working Out Whether Your Fears Are Genuine or Misplaced
Prioritise Having a Healthy Relationship Instead of Focusing on 'Getting One' From a Reluctant Sourc...
Advice: Is it my fault that we broke up?
Share this...