Saying NO doesn’t mean that you’re screwing someone over 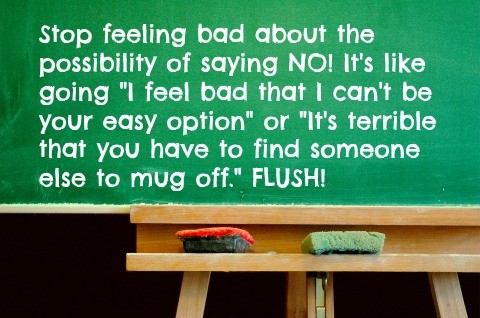 Each day I hear from people who agonise over ‘tricky’ decisions such as:

Should I accept the offer of being in a casual relationship when I know that I don’t want it / wouldn’t be able to handle it?

Should I be the Other Woman/Guy?

Should I stay or should I go? This person doesn’t treat me with love, care, trust and respect.

Should I, in fact, can I say NO to something that busts my boundaries?

I regularly emphasise the importance of knowing your own line and exercising your right to say no because for some people it’s as if “no” is a dirty word that’s been erased from their vocabulary.

Here’s the thing: It’s understandable to feel conflicted over a once in a lifetime opportunity or something great that will add value to your life but feeling bad about saying no to something that you’re far from being the only person who can fill that role is like Jedi mind tricking you into a scarcity mentality. It’s as if this person in putting their rinky dinky offer on the table now holds the key to life and your future rests in their hands. Really? Say it with me: they’re just not that special.

When we battle with saying no to something that we’re perfectly within our right to and isn’t in line with our own needs, expectations, boundaries etc, it’s because we’re either operating from a position of believing that the other party is entitled to our yes (they’re not) or because we know what we want to say but have the ‘Should’ Voice of Doubt & Guilt trying to talk over our true selves.

This is your life, your boundaries, your decisions – these people act in their own best interests and you should be able to act in yours. Remember that saying no doesn’t mean that you’re acting in your best interests by screwing someone over. Let them take care of their own stuff and you take care of yours.

Take the friends with benefits / booty call ‘offer’ – what’s to stress about? Due to the nature of what’s being proposed, if you don’t want to do it, it’s no big deal because it’s casual, plus it’s not much of an offer (although it might look like it if you’re not doing much for you) and there are plenty of people about who can fill the role. Genuine dating, progressing on to a mutually fulfilling relationship takes effort, intimacy, commitment etc – casual relationships are low effort and are easily replicable roles. You dignifying this situation by stressing about declining gives the impression that this person is oh-so-special. They’re not! There’s no fire, it’s not your last supper, so stop acting as if you declining to hop on the booty express means that you’re now cut out of the relationship ‘lottery’.

When you feel bad you’re essentially saying, “I’m a terrible person for causing you to have to go out there and make a little more effort to find someone who will shag / ego stroke / give you everything without expecting very much back. I should just say yes and make it easy for you.”

Why feel bad about saying no when it’s not like they feel about bad about asking or expecting this stuff of you or doing shady stuff? A relationship where only one of you has a conscience in it normally features a doormat…

When it comes to affairs, don’t feel bad about declining or opting out – they have someone already so it’s like feeling guilty about not giving them double helpings and being their backup supply. Just because they ask or coerce doesn’t mean it’s your destiny or their right. You have choices.

It also says a lot about how we’re conditioned to be people pleasers when we see shady behaviour in our early dealings with someone and feel bad about the recognition of it as if, “Oooooops! How dreadful of me to notice that they’re not being very nice to me!” It’s sad but true that what you won’t put up with there is somebody else only too willing to. Sure you can live your life being frightened of the possibility that they’ll spontaneously combust into a better person in a better relationship but maybe it’s time to question why your happiness and sense of self hinges on a long shot of someone else making dramatic changes – make your own!

In much the same way that your flaws don’t make you exceptionally different because everybody has them, the fact that someone is proposing or even trying to coerce you into something shady doesn’t make them exceptionally special or powerful nor does it make whatever it is an exceptional opportunity. There will always be people willing to chance it and ask for / do stuff that they know is wrong / shady – for these people it’s their path of least resistance so don’t make your path of least resistance a people pleasing one that leaves you in pain.

Dealing with our resentment towards a loved one creates healthy boundaries
When someone's imposing something upon you, they're trying to remove your choice (and overstepping y...
10 Fundamental Lessons on Boundaries in Relationships Part 1