“They’re ‘Too Nice’ To Break Up With” 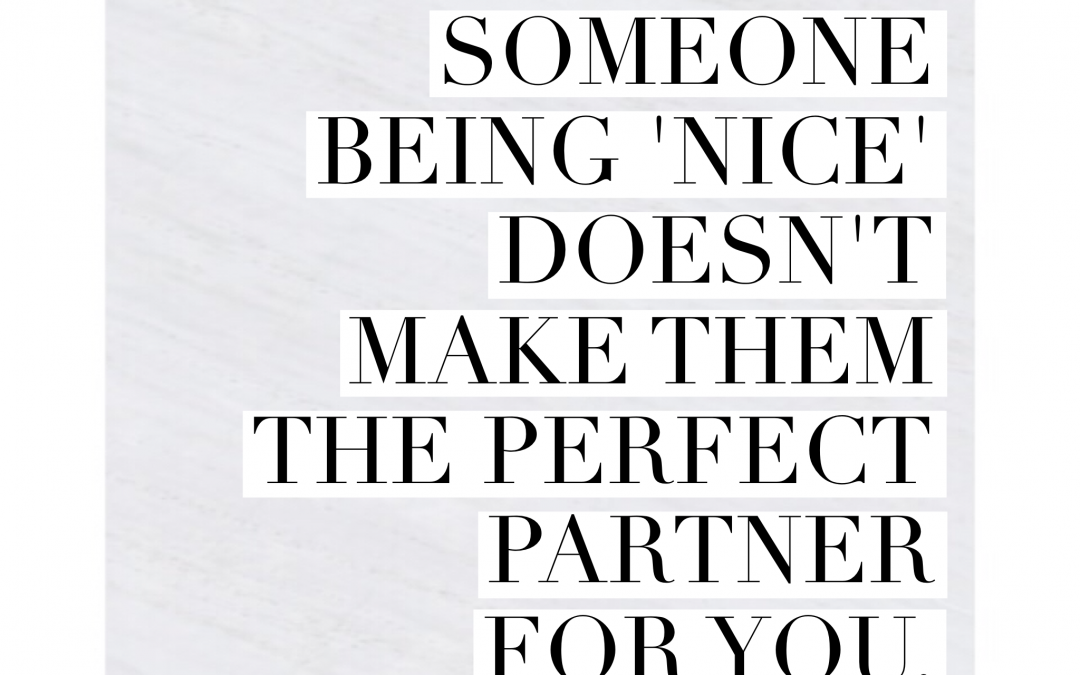 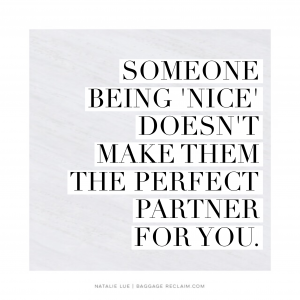 One of the trickiest situations can be when you know that you need to break up but you stay together or keep going back because you feel that the person is ‘too nice’ to break up with. It’s like, if they were treating you badly or there basically wasn’t something about them or the relationship that made remaining beneficial, you would have finished it, and so as such, you feel caught between a rock and a hard place. As I said to a close pal earlier this week, you end up feeling as if you’re going to kick a puppy in the face and of course, no one wants to think of themselves in this way!

But, here’s the thing:

You’re not doing yourself, never mind the other person any justice by remaining in the relationship.

It’s one thing to stay because you want to and because you genuinely love and accept the person, but it’s another when fear of looking like ‘the bad guy’ or enjoying aspects while gritting your teeth and vacillating between breaking up or staying, is blocking you from making the right, albeit uncomfortable decision.

My friend is used to doing what I used to do: metaphorically torching the relationship a la Angela Bassett in Waiting To Exhale, or exiting with stealth moves to avoid dealing with the person and the situation.

Neither option, while they might feel good initially, results in growth, because if the only way that you can break up is with drama or trying to do a Houdini, you won’t know how to do the grown-up thing and admit when something isn’t working, discuss it, and make a solid ending.

When you’re then faced with a relationship that doesn’t call for a drama or disappearing, you then end up doubting the validity of your desire to break up.

But they’re such a nice person.

I don’t like _____ and _______ and I know that this isn’t really going to work long term but I really like the affection/sex/not being alone {or insert benefit of choice}.

I don’t want to break their heart.

Next thing, you feel trapped, guilty and eventually resentful.

When you know what it’s like to have your heart broken, to feel disappointed because of that gap between your hopes and expectations and reality, and to know that something isn’t right but hoping that your nice ways will win out, it’s easy to see why you would be reluctant to do that to someone else, but it’s critical to recognise that as painful as those experiences might have been, it was the right thing for the relationship to end if it wasn’t mutual.

You have to be careful of projecting your past experiences as well as your fears onto someone else and that blinding you to what you need to do.

This situation isn’t the same as the past, although it will be if you respond as if you’re still ‘back there’.

What you try to avoid will show up anyway.

The danger we run when we are not honest about how we feel and we delay on doing what we need to, is that we do more damage that we would have done if we’d acknowledged and shared our feelings, even though it might not have been very pretty, it might have led to some awkward or even painful discussions, and yes, it might have led to the end of the relationship.

By putting ourselves in a situation where we are going through a cycle of feeling temporarily re-invested in the relationship only for the same old feelings and realisation that it isn’t working to return, we are in the habit of repeatedly calling the relationship into question.

We cannot be committed or intimate if as much as we might get on with someone and like aspects of the relationship, we’ve broken up with them many times in our head, maybe a few times in real life, or dropped numerous hints in the hopes that they’ll spare us the task or that they’ll at the very least, figure out what they need to get right so that we don’t have to leave but we also don’t have to get really vulnerable and be direct. Of course, what’s likely to follow is subconsciously acting up so that they do what you won’t.

One of the things we have to recognise when we go out with that nice person who isn’t quite right for us is that as disappointing as it is that it’s not the right fit, it’s also progress.

If you’ve gone from being involved with folk who mistreat you that you struggle to break way from, to folk who, while they’re nice in a number of ways, you’re incompatible in others, it’s progress.

Just because someone is nice, lovely etc., it doesn’t mean that they’re the person for you. It doesn’t.

It’s a bit like having a few bad jobs, being unemployed for a bit, and then getting a nice job but that while it provides you with a bit of money and there are aspects of the job that you enjoy, it’s not the job for you. It’s not the best use of your talents and you’re not growing.

As lovely etc., as this person might be, if it’s not a mutual relationship with love, care, trust, respect and shared values, you’re both inadvertently hiding out in a relationship that isn’t the best expression of your respective selves.

Remember that incompatibility means that you both want different things, and that can happen even when two people feel a great deal for each other.

And, just because someone is nice, lovely etc., but you’re not interested or you realise that as much as you like them, that the relationship isn’t working, it does not mean that you like being treated badly or that you don’t like ‘nice people’! You also don’t owe someone a relationship just because they’re nice or relative to your exes, they seem like Mother Teresa in comparison!

Don’t choose a partner based on your ex; choose them for them.

You need to love and respect that person (accept them for who they are and so be able to live harmoniously with your shared values) for it to go somewhere good, plus you need to be attracted to them.

It doesn’t make you a ‘bad person’ for wanting to end it with a nice person. The honourable, loving thing to do when you know that this isn’t it for you, is to set you both free so that you’re not blocking each other from being with the people who you can each experience the relationship that’s more befitting of you.

Struggle with breaking up even when you really need to? Check out How To Break Up.

The 2 Big Reasons We Lose Ourselves in Our Relationships
Vixen's Guide to: Dating a Nice Guy
My 9 favourite career and business books for people-pleasers, perfectionists and overthinkers