Moving past ambiguous situations: It’s OK to take a step back when they say that they’re not interested 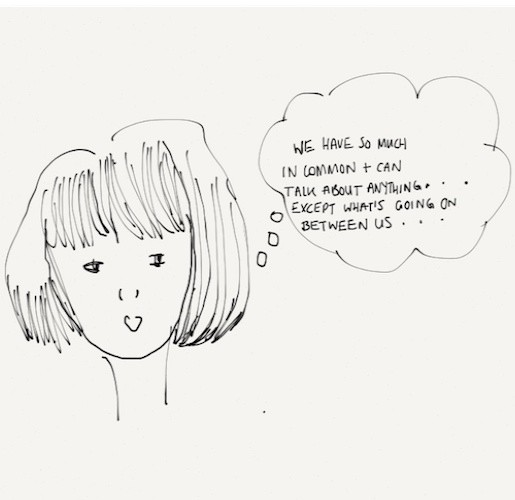 When two people are romantically interested in each other, they make it known and it doesn’t turn into this long, drawn out, ambiguous rigamarole of wondering whether or not they’re interested. It’s because one or both parties are being ambiguous why these ‘Whatchamacallit situations’ where people aren’t sure whether they’re “just friends” or whether whatever they’ve been doing is building towards dating or a relationships are happening in the first place. I’m still waiting for that email/comment/story that goes, “Our situation was super ambiguous and we texted / Facebook messaged for months/years and even slept in the same bed / dry humped / did everything but / did everything and still continued being ambiguous and here we are living happily ever after”.

What I do hear plenty of variations of is, They’re so interested in me that they don’t know how to show it and/or are so overwhelmed by it’. This is projecting and it leads to a whopper of an imagination hangover. Most of us struggle to predict the innermost feelings and thoughts of people that we’ve spent our entire lives around [family] and even those of us who think that we can must be careful of being complacent and assumptive. If you’ve come up with all manner of excuses for why your ‘Whatchamacallit situation’ is what it is, it’s time to ask:

How did you come to know so much about someone who is not expressing words and creating matched actions about the very thing that counts [what’s going on in this ‘relationship’]?

It’s tricky when friends and readers share tales of meeting “quirky”, “eccentric”, “super clever”, “poetic” and other such people who they ‘hang out’ with, talk about “everything”, and typically exchange a hell of a lot of texts and Facebook messages. Part of me wants to dress up as Whoopi Goldberg’s character in Ghost and say, “Molly, you in danger girl”. How can they spend so much time around or talking (or tippy tapping messages) to somebody who they say that they talk about “everything” with and yet still have no clue whether they reciprocate their interest and/or are up for a relationship?

It’s ambiguous in part because they don’t want to risk asking the person and jeopardising the picture that they’ve painted in their mind. It may also be about not wanting to risk the friendship but the problem is that the longer this ambiguity goes on for is the less of a friendship it is. These situations can weigh very heavily on the party who feels emotionally invested and is essentially waiting for the other party to step up and make things official. 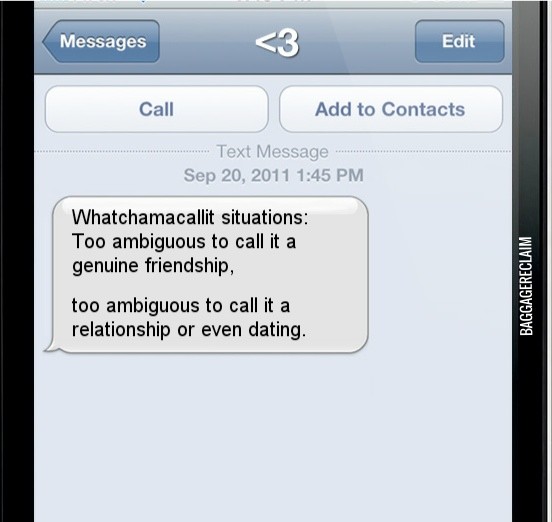 Aside from the obvious issues that ambiguity brings, namely not knowing where you stand and potentially putting yourself in a situation where the other party is enjoying all of the trappings of a relationship or at the very least your interest and even admiration without stumping up any real effort or commitment for that matter, the other big issue is that due to whatchamacallit situations being where you’re not pure friends but you’re also clearly not in a relationship, you don’t know what to define you as so you get put between a rock and a hard place in terms of handling their lack of interest.

Part of you may feel like verbally tearing them limb from limb, especially if it becomes apparent that they’ve been toying with your feelings, but another competing part of you will want to be nice and friendly about things and you may fear looking like a ‘psycho’.

Next thing, you’re squashing down your very natural hurt, sadness, and possible anger while they keep trying to act as if that whole you expressing your feelings / them mucking you around didn’t happen. They may even be blowing up your phone so that you can reassure their ego that you’re not mad at them or that they’re not whatever they privately feel their behaviour suggests. Note: It would be a damn sight easier in these situations if they would just admit their end of things and apologise. You then end up either trying to take a step back to give you a chance to get over things but then feeling guilty about not replying and even feeling as if you’re punishing them for not being interested, or you just end up trying to continue as normal and then tricking you into believing that they’ve had a change of heart and restart the fantasy.

Here’s the thing: You’re both grownups and you can own your part in letting things rumble on and learn from the experience but unless this was an open and shut case of pure fantasy, they played their part too. We’ve all been around the block a few times to know when somebody is interested in us. Let’s not pretend now. We often feel flattered even if we don’t reciprocate their feelings. It is okay for them to not be interested but it’s not cool for them to then:

You may be worried about how you look and looking like you’re punishing them but the reason why you’re focusing on these is because you’re not doing the all-important job of taking care of you. It can feel as if you’re going through a breakup but then you may feel ‘wrong’ for feeling this way as you may not believe that you have a legitimate reason. Every involvement, ambiguous or not, has your hopes and expectations tied up in it. When these are not met, you experience a loss and you need time to grieve. It’s the kind thing to do for you. If you pretend that you don’t feel as you do, you’re disrespecting you and ultimately those suppressed and repressed feelings will manifest themselves in various ways. You may even end up erupting in anger and frustration which may bring even more ill feeling.

Don’t worry so much about how you look because at the end of the day, if it’s been an ambiguous situation, it’s not so much about being angry about them not being interested and more about feeling angry that you’ve either been messed around before you spoke up or about the way that they’re behaving towards you now that you know how they feel. It may be convenient for them to spin it as you having hard feelings about things but that’s just a smokescreen for the truth.

Their lack of interest doesn’t have to spell the end of the friendship (unless it wasn’t really a friendship in the first place or they’re behaving like an arse now) but it does spell the end of the ambiguity and the crush. In accepting and respecting their decision even if it’s through gritted teeth, you’d be amazed at how different things look without them perched on a pedestal and you always trying to read between the lines.

When you bring clarity to these whatchamacallit situations, what can also come to light is that you’re no longer okay with settling for crumbs or fooling you in any way. You discover that actually, you want intimacy and to know where you stand plus if you take care of you, you also discover that the sky doesn’t fall down if the person doesn’t want a relationship with you. It can even prove to be a blessing in disguise. Relationships, romantic and otherwise, rely on honesty and by stepping up for you and removing ambiguity, you’re actually making a healthy decision to value integrity, security, intimacy and of course, you.

PS I am popping home to Dublin (Ireland) for a couple of days this week. If you’re around on Thursday evening, I’ll be hosting a meetup at Pedal Pushing Monkey from 6.15 pm. For more details and to RSVP, email natalie AT baggagereclaim.co.uk

The 'Ting' & Friends With Benefits
Reader Question: Why can't Mr Unavailables either let go of their ex or return to them?
Mr Unavailables & Assclowns: Sharing an absence of pride