Calming That Anxiety: When You Feel Jittery In a New Relationship 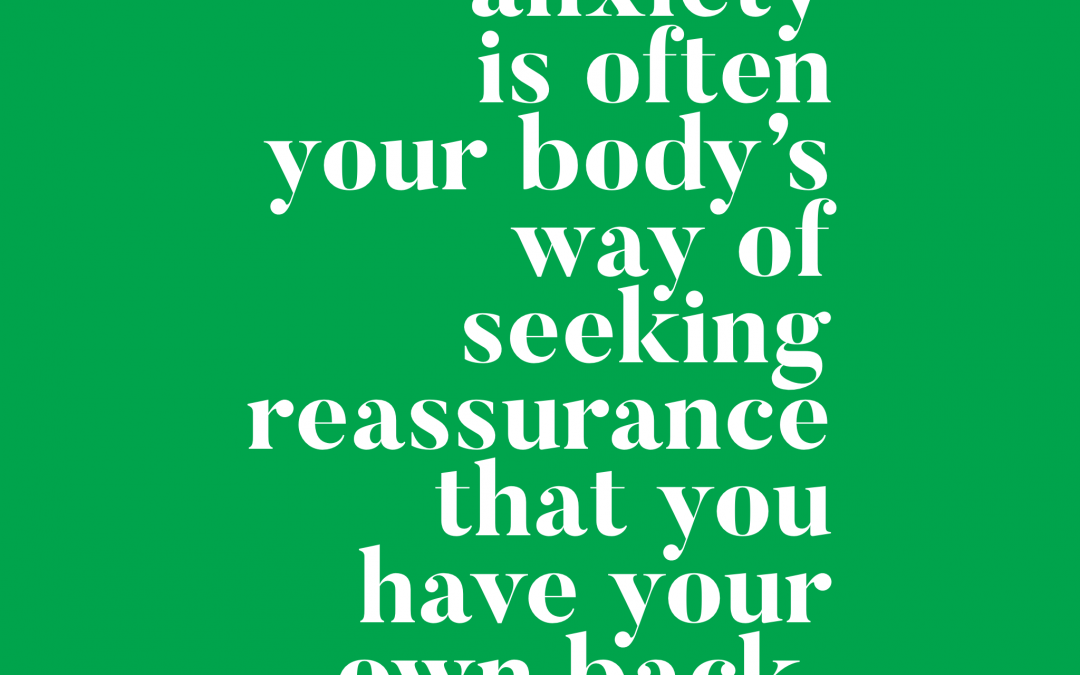 It’s not uncommon to experience jitters in a new relationship, and sometimes we think that we need to eliminate anxiety to know if we can date at all. There’s a lot to be said for “You won’t know until you go out there and try.” Trouble is, without learning the mental equivalent of pulling over on the side of the road when you feel anxious and then asking you, “What’s really going on here?” and then listening and calming you, you may be inclined to continue regardless of your anxiety. Or, you might withdraw from dating/the relationship without truly understanding what is going on.

It’s natural to have some nerves in a new relationship, especially if, like me, you’ve previously been jacked around by yourself as well as others. But there’s anxiety that you sanity-check with reality, and then there’s anxiety due to evidence that you’re ignoring you. You’re denying, rationalising, minimising and excusing what you’re feeling; your needs, wishes and expectations not being met; or their actions or something is off. It’s the whole, Is it fear or is it knowledge? issue.

If something’s not right, there is evidence of it somewhere.

Slowly play your mental ‘surveillance’ tapes back or evaluate how you feel. If you can’t pinpoint what it is with this person, see if you can recall previous situations where you’ve felt or thought like this and what your anxiety in these situations was about. It might be something big, it might not be, but ignoring your feelings makes it difficult to work how you feel and why when you really need to.

Dating is a discovery phase, and you have to use your judgment to evaluate the situation in reality and basically intervene if it’s a genuine case of overactive imagination and the voice of doom and tell it to shut the beep up. You have to differentiate between internal and external fear and respond to evidence with your Debit and Credit Trust System.

The ‘spoiler’ type of anxiety that turns up in your mind is an uninvited guest putting everything you’ve previously learned to the test.

Remember, life keeps serving you up the same lessons until you demonstrate that you’ve learned them and respond accordingly. The cues and triggers that may have tripped you up before remain the same, but you go, “Ah. I remember this from that class I took about fifty times: When They Don’t Make An Effort Until They Need To Hang Out / Get Laid / Borrow Money, FLUSH and Don’t Accept Crumbs. Oh and I’ve also taken the, Slow Your Frickin roll Instead of Future Faking Yourself class.” And then you consciously choose to do differently instead of doing the equivalent of repeatedly throwing yourself against one of those shatterproof doors.

You do have to literally say to the spoiler, “Well, hello old ‘friend’…. Funny that you should show up. I don’t remember inviting you. What’s that? You think that this person is too good for me? You think that it’s all probably going to end anyway? Don’t be nasty. He/she’s not too good for me. I’m worthy of being with someone who __________. Now either say something nice or leave.” And then basically silence the hell out of it with evidence.

You always know that you’re ignoring your gut (although you might make the mistake of treating your gut as if it’s an annoying party pooper guest) when you silence it with bullshit.

And you do know when you’re bullshitting even if you won’t admit it. A big clue is if you’ve done this line of bullshit before and it sounds like excuses and possible desperation.

If you’re worrying about whether it’s going to go ‘wrong’, it’s time to come back to the present and be more ‘mindful’. You’re spending too much time worrying about what isn’t happening or trying to anticipate what’s next and forecasting doom.

You can’t do a relationship or dating without putting in both feet. OK, you can, but then that just makes you like every other unavailable person on the planet — trying to skim off the fringe benefits with as little input as possible.

Be honest about the source of your anxiety.

Haven’t been on a date yet or have only been on a date or few and you have a high level of anxiety? Going on dates without being emotionally honest enough to recognise the origins of these feelings is only going to compound your anxiety, not relieve it. It doesn’t necessarily mean that you have to stop dating, but it does mean listening to your thoughts and feelings.

Try a Feelings Diary and monitor how you feel and what else is happening during these times for a week or so. There may be other factors contributing, such as work stress or even boredom.

Judge people and situations on merit, not bullshit.

By far, judging people and situations on merit so based on reality, along with checking in with you daily and having a respectful internal dialogue calms anxiety. You’re not exactly going to feel less anxious if you’re calling you “stupid” or feeding your mind with all sorts of drama scenarios!

Be a friend to yourself first. Respect you even when at times you don’t make sense. I went through a period of being anxious when I started dating Em. After a while, I had to say, “Nat! Stop with the crack talk!” I’ve got to be honest: sometimes I’ve liked busying my mind with Dynasty-levels of drama. It felt more comfortable to have something to be getting my knickers in a knot about. But it’s one thing when you have evidence to feed drama (although you’ve got to act not stick around and complain/go into analysis paralysis), but when you stand to jeopardise your self-esteem or a good situation, it’s time to rein yourself in.

The past is useful for checking your mental database to compare data where appropriate, but it’s not useful if you’re still living in the past. It’s not helpful when you can’t differentiate between what’s going on in front of/around you and the past.

Sometimes you just need some reassurance that you have your own back.

It’s natural to experience anxiety when stepping into new territory and having to learn about and learn to trust someone, but it’s not the biggest gamble of a lifetime unless you make it that by forgetting you and your life in the process of trying to ‘win’. Regardless of the outcome of this involvement, you still need to be there for you. And when that’s not in question, you can handle whatever comes your way.

Knowing If You Feel Good In New Relationships Part Two
Checking Out
Fast-Forwarding: When Someone Speeds You Through Dating