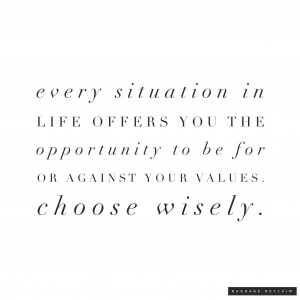 I vividly remember my teenage self reassuring me that once I became an adult, I wouldn’t have to contend with peer pressure, that sense of being influenced to change our values, attitudes and behaviours in order to essentially follow the herd so that we are acceptable, liked, and safe from scrutiny.

Peer pressure activates the people pleaser within and pushes the buttons of feelings that based on the past, we associate them with rejection, embarrassment or even humiliation.

As people pleasers, we are trained (and yes have trained ourselves) to put the needs, expectations, desires, feelings and opinions of others ahead of ours, even if it’s to our detriment. We will significantly inconvenience ourselves and put us in great discomfort just to stop someone from experiencing the discomfort of their own poor boundaries or to protect them from receiving a no.

We often know our values in principle but the moment that we experience the discomfort of saying/showing no whether it’s in actuality or quite simply the thought of doing so, something shuts down and we go into autopilot. It can almost be an out-of-body experience where it feels as if someone else has taken over and we’re not in control. The ‘no’ or what we truly feel or think is frozen and these experiences are often followed by shame.

As a result of peer pressure, we call bullies ‘friends’, go further than we want to on dates, say or show yes when we mean no,  hold on to friendships we’ve outgrown, agree to try or do things that we know we don’t want to, pretend to like things that we don’t, forgo the career, interests or passions that we truly desire, and grapple with anxiety, resentment, anger, sadness, depression and loneliness. Yes, after all this peer pressure, we can feel so cut off from who we really are and so afraid of bad consequences that even when we’re surrounded by people, we feel incredibly alone. This will be further accentuated by the self-criticism we batter ourselves with as a result.

Due to how chaotic things could be at home in my teens, falling in with the crowd gave me a level of control, safety and a bit of a boost. I took up smoking at fifteen to appeal to a group of people who I was convinced did not like me. Despite initially hating the taste of alcohol and not liking to feel out of control, I eventually managed to ignore that discomfort because I discovered the confidence boost and escapism it offered me in the toxic relationship wilderness years. But it was drugs that taught me about sticking to my values despite it offering the possibility of rejection.

As the rave and clubbing culture took off, so did usage of ecstasy, speed, coke etc. I was offered drugs many times by friends or even strangers and my insecurity would initially kick in and I would wonder if I should “just do it”, but I would get this feeling–I instinctively knew that it was a bad idea, that I would be in the percentage of people who keel over after trying it, but also that I fundamentally didn’t want to.

Here’s the funny thing: When I felt guilty and insecure about not partaking and as if I was making a judgement about ‘everyone’, I was offered drugs all the time. As soon as I happily owned my decision and stopped carrying on as if I was inferior, incidences became few and far between.

I did feel alone at times, including at an overseas wedding where most of the wedding party partied until the early hours for the entire trip–I wasn’t included and I get it, but it felt quite wounding and isolating.

Overall, most of my friendships survived but some faded. That said, I also made a number of new friendships over the years with people who felt similarly to me.

It took a few more years before I applied my sense of values about drugs to other areas of my life, specifically around men, but similarly, when I stopped apologising for having boundaries and standards and calmed down my pleaser, it halted unhealthy relationships in their tracks and opened me up to better ones. 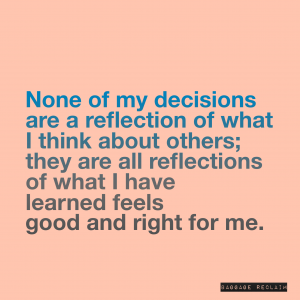 My relationship with alcohol did become more mindful by my mid-twenties due to having a minor epiphany moment while hammered and crying, and realising that I did not want to end up going down the familial path. I’ve previously given up alcohol for up to a year at a time for health reasons and I stopped drinking wine more than six years ago because it doesn’t agree with me–my bones and joints seemed to ache for days afterwards and I’d experience flu-like symptoms. I also don’t drink if I quite simply don’t feel like it.

None of my decisions are a reflection of what I think about others; they are all reflections of what I have learned feels good and right for me.

When it comes to values, listen to your body. It lets you know what isn’t healthily working for you. Experiencing discomfort lets you know when you need to make a change, even if it’s not what your peers are doing.

We often think that peer pressure is a teenage issue but it’s alive and well long into adulthood until we own ourselves.

Many people are still fending off busy hands despite being well into adulthood and have been called “frigid”, “uppity”, “a baby” or even had their sexuality questioned. I have emails from women old enough to be my mother who are worried about scaring away a potential partner by not going past ‘first base’. I’ve heard from people who would rather make themselves ill than have a different diet to their friends and there are a hell of a lot of people who have questionable relationships with alcohol but who continue drinking to fit in, or who even peer pressure themselves.

It is more than OK to say no. What you enthusiastically consent to feels very different to what you feel pressured or guilted into whether that’s inward or outward influence.

What feels good and right for you is personal. The more you explain, justify or even apologise for your preferences (your values) is the more negativity you throw at it and the more you look as if you’re trying to convince you. Every situation in life offers you the opportunity to be for or against your values–choose wisely. The more you own your values is the less that someone can come along and knock you off balance.

What is the point in keeping up with the herd if you’re rejecting, disliking, and scrutinising you with self-criticism?

And don’t fall for the lie that is, If I stand up for who I am and live by my values, I’ll wind up alone, because the truth is, you will feel alone and insecure no matter how many people you have around you because you will be reliant on external esteem. Acknowledge any confusing feelings of loyalty to a pattern that’s not working for you and ask: Who do I feel that I would be being disloyal to if I took a stand about this? Often some of the areas where we pressure ourselves most have some crossover with something that a key family member engages in.

You are allowed to choose to live your life differently to family members. It’s not a judgement on them or on anyone else for that matter.

Yes, you having boundaries and values may cause some people to step back or even vamoose out of your life but beyond the discomfort of that change, is the space for a better life with better relationships in it, something you won’t know about if you keep reneging on your inner agreements with you.

It’s not you having different values that’s the problem; it’s not trusting your instincts around them and living them. It’s believing that different is wrong.

Reader Question: How do I know if I'm overestimating myself?
Compatibility, Your Type, and Common Interests Part Two
Recognising Healthy Interactions and Relationships (There's a simple way to do it)