When our perspective grows, we grow too 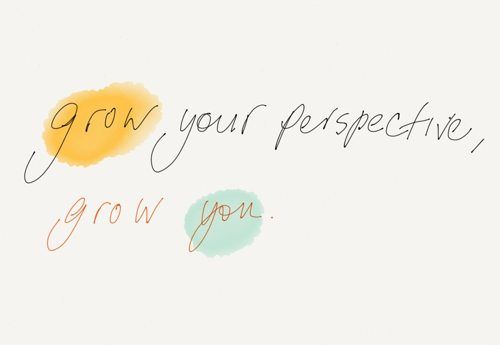 My mother’s planning to go back to school in the autumn to pursue her education. She’s always believed that the reason why people have made ‘better’ decisions or had ‘better’ opportunities or are seen as more ‘worthy’ is because they were better educated. Despite career achievements and great decisions that belied the lack of education that she felt held her back and very clear demonstrations of her intelligence plus plenty of people who are just like her and successful and happy, plus all of us who know her giving her examples in her own life that contradict her beliefs, she still believed that she was less than.

When we’ve decided that a reason is the reason why ‘everything’ or certain things in our life, it corroborates a story that we’re used to telling ourselves plus the belief(s) hides what may be more applicable reasons and it also helps to avoid change.

Recently she was talking to her director about her plans and explaining why. She got the shock of her life when the director revealed that she has one less high school qualification than my mother and hasn’t had a great track record with men.

When I was going through a very difficult time with my relationships and experiencing eff up after eff up, my mother didn’t ‘get it’ because in her mind, I shouldn’t have been doing what I was doing and feeling what I was feeling due to my intelligence and the fact that I’d had so much more education than her.

As I’ve pointed out to her many times, if it were down to intelligence and/or education, I’d lose a significant chunk of my readership! That and it’s not like any ‘edumacation’ I got at home or at school/university had me primed for being relationship smart…

It’s about how we feel about us.

It’s funny though because we can assume that because we’re intelligent, educated, successful, beautiful or attractive etc, that we’re relationship smart (and that people we’re attracted to who are ‘like us’ will be as well) and we also assume that all of these things will make us very ‘attractive’ to potential partners. At the same time, someone who doesn’t think that they’re some or all of these things will believe that their options are less than what they are and keep second guessing their smarts and ultimately selling themselves short. At the same time, whether you have the former or latter beliefs, you can still end up not liking who you see in the mirror and struggling with relationships.

We can be stubborn and persist with a line of thinking and behaviour in spite of compelling reasons to do so.

When we have beliefs that pull us down, we’re only really interested in evidence (or what we believe to be evidence) that supports our perspective so that we don’t have to change. We have a bias towards noticing information, situations and people that chime with how we see and do things. It makes it easier. It’s much harder work to be challenging, processing and changing.

We look for the evidence that suits our agenda and discount the significance or even existence of evidence that tells a different story.

If we’re particularly stubborn and we hear of a different story, we’ll go “Yeah, but they’re lucky / better looking / had a better start in life / younger / older or whatever.”

There’s also the lingering fear of, ‘What if what I’ve steadfastly held onto all of this time isn’t true? That would be ‘waste’ or it would make me ‘wrong’ plus it means I will have missed out on so much, so I’m going to dig my heels in’.

Sometimes we just like the idea of being ‘right’ all of the time even if it makes us feel bad. When we’re like this, we have an objection for everything and insist that we’ve done everything possible that there is and the world is shite or it’s everyone else that has to change.

A belief is only worth holding onto if it benefits you. If a negative belief is having a big effect on your life and your perception of your options, that belief is worth challenging the hell out of.

In the end though, all it takes is a jolt to our perspective to sow the seeds of the possibility that things could be different. It tends to be easier to pay attention to this jolt because our current position where we may already be going through change, makes us ripe for being ready to listen and see. The seeds may be sown over time,  like it happened with my mother, and then a big shift (like her conversation) can alter her perspective. She’ll still go and do a course but instead of doing it because she’s less than, she’s doing it now to enhance what she’s now realising is an already intelligent and ‘educated’ in the school of life woman, who still has options.

It would be very easy to fall into the trap of berating herself about all the things that she could have been but as is the way with life, we do the best we can with the knowledge and perspective we have at the time and when those grow, we grow too.

They're Just Not THAT Special and Why Putting People On Pedestals Makes Them Think They Can Do Bette...
Minimise your assumptions to reduce your Drama Seeking
We self-sabotage our efforts to do better by us, because we're afraid